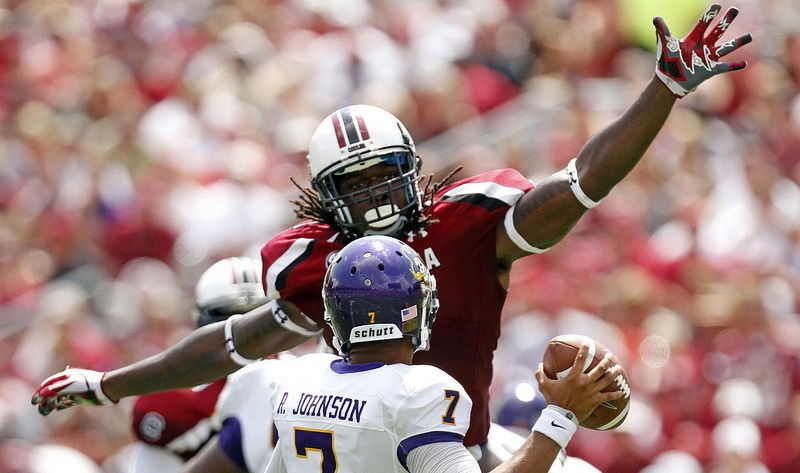 University of South Carolina defensive end Jadeveon Clowney – a Heisman Trophy candidate and probable No. 1 overall draft pick – is looking to take out a $5 million insurance policy in the event he suffers a catastrophic injury during the 2013 season.

Clowney, 20, was a unanimous All-American last year – leading the nation in sacks and tackles for losses. The exclamation point on his season? “The Hit” – a bone-crushing blow against Michigan running back Vincent Smith in the 2013 Outback Bowl.

Were he eligible for the 2013 NFL draft Clowney would likely be selected first overall – which is worth millions of dollars in guaranteed bonus money.

That’s why a member of “Clowney’s camp” contacted a prominent sports insurance company – Coastal Advisors – recently in the hopes of securing a policy for Clowney, according to Alex Marvez of Fox Sports.

Clowney is a once in a generation talent … the sort of player you see maybe twice in your life. In fact last August ESPN The Magazine compared him to Lawrence Taylor – arguably the greatest defensive player in the history of the game. We declared that comparison “a bit premature” at the time, but there’s no denying Clowney accelerated his already trajectory toward “LT” status last season.

In fact it is downright frightening to think about how good he’s going to be in 2013 … and beyond.

Luck Of The Iverson?