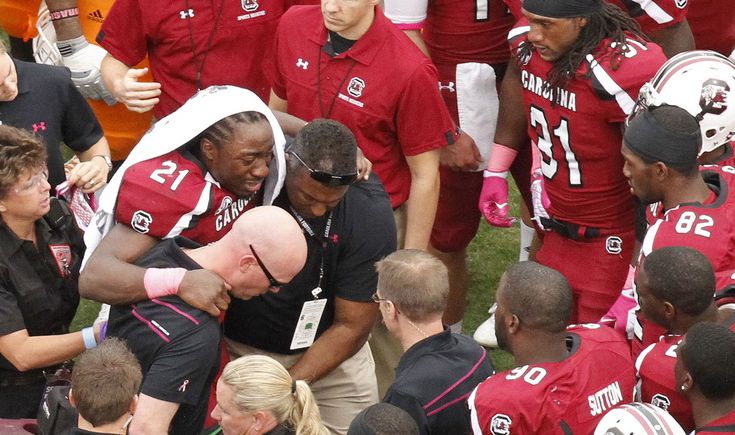 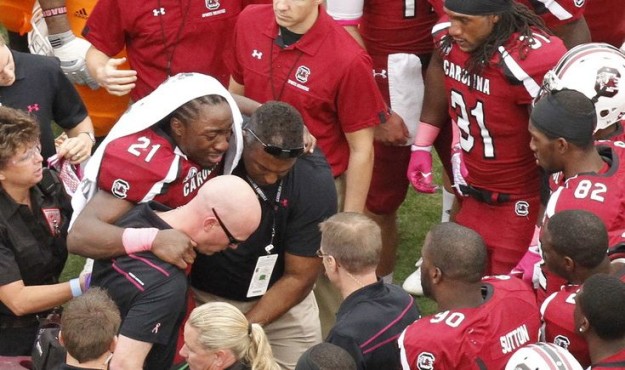 University of South Carolina head coach Steve Spurrier confirmed on Sunday that star running back Marcus Lattimore suffered a dislocated knee during the second quarter of the Gamecocks’ win over Tennessee this weekend – confirming the diagnosis originally reported here on FITS.

And while the superstar tailback – who broke the school’s career touchdown record earlier this year – is indeed out for the season, Spurrier told the Associated Press that there was a chance Lattimore could take a medical redshirt for the 2013 season and return to the Gamecocks in 2014.

“We’re optimistic his football days are still ahead of him,” Spurrier told the AP. “There is a history of guys coming back from this.”

Details are still sketchy at this point, but Spurrier’s comments represent a 180-degree departure from his somber statements on Saturday about how he knew Lattimore would be a success – although “I don’t know (in) what field of life.”

While being tackled from behind by Tennessee linebacker Herman Lathers on a second down running play, the Gamecock superstar and preseason All-American was hit low by Volunteers’ defensive back Eric Gordon causing his right knee to contort – badly.

In fact former Gamecock linebacker Anton Gunn described it as “the worst injury I have ever seen.”

Gordon – who some Gamecock fans accused of a dirty hit – took to Twitter to defend himself.

“Its unfortunate that boy got hurt …but I was just ballin!” he tweeted. “I clapped for em and ehthing (sic) when he got up chill out.”

Lattimore has bounced back from one season-ending injury already in his career – torn ligaments in his knee suffered last October in a game against Mississippi State.  In 28 career games at USC, the 6-foot-1, 218-pound Duncan, S.C. native has rushed for 2,677 yards and amassed another 767 yards through the air.  He’s also scored a school-record 41 touchdowns.

UPDATE: The University of South Carolina sports information office has provided an official update on Lattimore’s injury.  According to the school, he suffered a “hyperextension of the knee (which) resulted in injury to several ligaments.”

“There were no fractures or additional injuries,” team physician Dr. Jeffrey Guy stated.

Gamecocks Climb To No. 8 In BCS