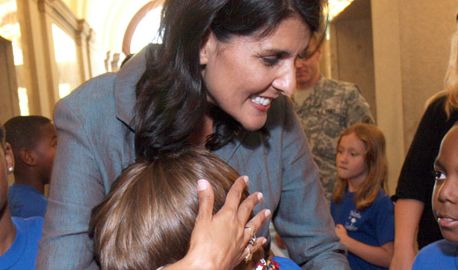 S.C. Gov. Nikki Haley is contemplating yet another radical reversal of her 2010 campaign platform. In fact the first-term “Republican” is reportedly on the verge of embracing a central plank of her former Democratic rival’s gubernatorial campaign.

According to Democratic and Republican sources familiar with Haley’s thinking, the governor is mulling a costly flip-flop of her 2010 position on government-subsidized four-year-old Kindergarten. Assuming Haley winds up supporting such a plan, she would be adopting one of the core campaign proposals of her “hopelessly liberal” 2010 opponent, S.C. Sen. Vincent Sheheen (D-Camden).

She would also be abandoning her long-held view that taxpayers should not subsidize such an expense.

In 2010, Haley said South Carolina taxpayers couldn’t afford to subsidize a four-year-old Kindergarten program. Instead she vowed to assemble a faith-based coalition to address the issue of early childhood education.

“What I will do is get a huge faith-based coalition together from all over the state and develop a community project, which is preschool programs, afterschool programs, job shadowing, mentoring,” she said at the time.

Haley added her plan would “not cost the first dollar.”

Not only has Haley failed to make good on her faith-based coalition promise, she’s now reportedly on the verge of committing the state to a massive expenditure of public resources.

How much would a statewide four-year-old Kindergarten program cost? Well, K-12 education in South Carolina currently costs more than $9 billion a year so you can do the math – we’re easily talking hundreds of millions of dollars in new spending.

Haley hasn’t addressed education in a substantive manner since August of 2010 – when she rolled out a weak campaign platform that lacked a firm commitment to long-overdue parental choice expansion (which she consistently supported during her six years as a state lawmaker). And while the governor has paid lip service to school choice – she hasn’t lifted a finger on its behalf.

After ignoring education related issues during her first two years in office, Haley announced her intention to “start a conversation” about the issue during her 2013 “State of the State” address. Among the names she invited to that “conversation?” Sheheen and fiscally liberal “Republican” Senate leader John Courson – both ardent choice opponents.

It is our hope Haley will think twice before she embraces a massive expansion of our state’s failed education bureaucracy. If there is one thing history has proven conclusively, it’s that government has no business whatsoever trying to run an education system – particularly here in South Carolina.

If her goal is truly the elevation of academic achievement in dumb-as-dirt South Carolina, then Haley needs to start shedding layers of our state’s education monopoly, not adding new layers.