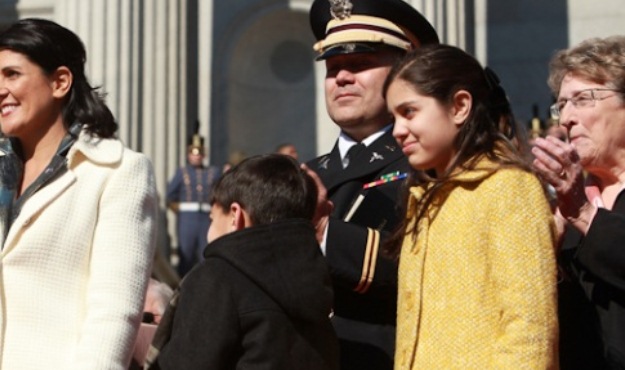 Hello, I’m writing this piece in response to the “Letter: Michael Haley’s Convenient Deployment” article posted anonymously by someone who referred to themselves as Consultant. First I’d like to say that I don’t question the patriotism of the writer of this article, but will take their thoughts as an opportunity to inform.

All families of military, US government agency, and private contractors that serve our country in distant lands such as Afghanistan know that when they see their loved one awake and put on their uniform/clothes to leave, that it may be for the last time. That the drive to the parking lot or gymnasium to participate in a going away ceremony prior to getting onto a bus, may be the last time they see them. That is a sobering and challenging experience for any family member regardless of their status, privilege, or bank account.

Secondly, service is just that service. Those who have chosen to serve their country in whatever capacity have earned the honor and respect of a nation — their nation, this nation, the United State of America. Those who pay the ultimate sacrifice will live on with us forever. I can pointedly say that all service is equal although it is different. I’ve had the unfortunate experience to have friends killed during patrols in Afghanistan and while sleeping in there bunk aboard a FOB after a rocket attack or small arms fire. I’ve had friends killed while on combat patrol chasing the enemy and in a village attempting to show provincial leaders best practices.

I’ve lost friends in training preparing to deploy and during deployment making what some would call routine helicopter rides in the area of operations. Our nation lost an Ambassador who chose to serve his country by helping to rebuild a war torn country. A private citizen serving as a part of the Ambassador’s security detail lost his life. All of these individuals had one thing in common, they chose to serve their country and place themselves in harm’s way. Some chose to go to confront the enemy directly with arms, others chose to go and challenge the enemy by assisting to build a better, brighter future for others. I don’t think anyone should be attempting to belittle or challenge either’s service.

Finally the article’s assertion that Governor Haley, Mr. Haley’s wife, possibly lobbied to send her husband, her children’s father to war is just plain reprehensible. It is on the battlefield that he’ll often have his guard down and place his life in the hands of other soldiers or possibly Afghan forces as he attempts to assist the Afghan farmers. I have been deployed and a part of that security detail and understand that the success of that farmer meant the long-term success of the operation. It is that long term success that makes it somehow worth it, otherwise it is hard to reconcile any loss of life with just an attempt that fails. Many of the conflicts we are involved in today are not about how many people we kill, but how many people we help so we don’t have to kill. It takes both the farmer trainers like Mr. Haley and the security forces to accomplish that task.

I can’t speak for the governor but I’m sure she’d have given everything she had to ensure her husband and the other spouses that boarded that bus didn’t have to — although they are proud that their loved ones chose to.

(This is a letter to the editor from a FITS reader. It does not necessarily reflect the editorial position of FITSNews.com. To submit your letter for consideration – anonymously or otherwise – click here).