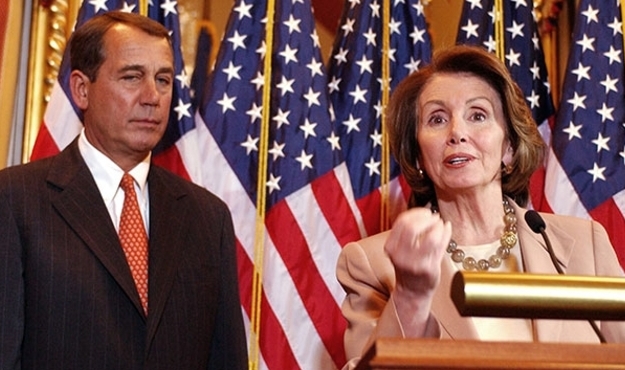 Fresh off of his wholesale betrayal of the principles his “Republican” party is supposed to stand for, U.S. Speaker of the House John Boehner (RINO-Ohio) was reelected to his post this week by a narrower-than-expected margin.

The fiscally liberal “Republican” – who backed a pair of massive tax hikes in the run-up to the fiscal cliff debate – was defeated former Speaker Nancy Pelosi (D-California) by a 220-192 vote margin.

The deciding vote in Boehner’s favor was cast by U.S. Rep. Michele Bachmann – a rabid social conservative and failed GOP presidential candidate from Minnesota who fancies herself as a Tea Partier with a “titanium spine.”

Apparently not in this case …

“Bachmann, the leader of the Tea Party Caucus in the House, was widely assumed to oppose Boehner in his quest to retain the gavel after having been ridiculed for her strong stands in favor of limited government and balanced budgets,” reports Adam Bitely of Net Right Daily.  “While many in Washington denied the existence of active opposition to a second term of Boehner’s speakership, Boehner won with a narrow margin.”

U.S. Rep. Mick Mulvaney chose not to support either candidate – which as far as we’re concerned was the right move in this election.

A choice between Boehner and Pelosi isn’t a choice at all – unless of course you believe selecting a red versus a blue condom is going to make any difference in the ass-raping your government is going to administer to your wallet this year.

How ’bout edit this one so it makes sense?

JOE WILSON voted for that tax raising slug. apparently Joe was sleeping and thought it was a recess vote so he could go mooch another free lunch off a local service club. Loser!

Why does Joe Wilson keep that turd Butch Wallace around? That leech is good for nothing.

Bachman PLUS Gowdy,Hunt, and the other South Carolina reps who TEA partiers believe they have in their court voting for Boehner??

Karen Martin (queen of the Spartanburg TEA party) must be going ballistic!!!!

I ment Duncan, not Hunter.

Guess I was thinking Duncan Hunter

Sorry for the typo.

I did see/hear Joe Scarboro on “Morning Joe” this morning say that there was a coup planned last week to remove Boehner but they realized noone was really qualified to take his place so the coup never took place.

He wasn’t joking when he said that either so I guess it is true.

Now if he would only shut-up sometimes and let Mika do more of the talking!!!

Ahh. This will be fun. A Libitard House, Commie Senate and Executive branches and Libitard to leaning Commie Supreme Court.

There going to have to yell louder than usual and keep the BS (Insert Name Here) cliff going strong to make you think they are actually doing something.

Have a Great Day!! :) There won’t be many left with the Demlicans and Republicrats in charge.

Is this ,Demlicans and Republicrats- tourette’s syndrome thing you got going a result of the sexual abuse suffered in your formative years?

Lemme know.Dr Phil ,Okra or one of ’em ,is gonna do a show,and they offer extremely expensive but free help,if you’ll come on the show and let people laugh at you…

Some of the best sex I’ve had was with a chick suffering from Tourette’s.

The shit she’d shout during fornication was inspiring.

Batshit Bachmann squeaks in Boehner? Oh man… Not that Pelosi would be any better. That’s the kind of fight you wish would end in a double knock-out.

I wouldn’t give Mulvaney too much credit, somehow I’m sure if his vote was needed he would have voted Boehner too.

You can rest assured of that.

Republicans Apologize to Top 1.5 Per Cent

WASHINGTON (The Borowitz Report) — In the aftermath of the fiscal-cliff deal, Republicans in Congress issued a heartfelt apology to the top 1.5 per cent richest people in America, offering “messages of profound condolence” for allowing their taxes to increase slightly.

“Our hearts go out to them,” said House Speaker John Boehner (R-Ohio), still teary-eyed after hanging up the phone with a multimillionaire in Orange County, California. “We came to Washington to do the work of 1.5 per cent of the American people, and we didn’t get it done.”

The House Speaker said that he had spoken to several members of the top 1.5 per cent who were “understandably despondent” over seeing their taxes rise marginally as a result of the deal: “Some of them were so upset they even considered moving to Canada, until they found out the taxes were higher there.”

Mr. Boehner said that he tried to offer the wealthy consolation by reminding them that because of an increase in payroll taxes, millions of middle-class and working-class Americans would be suffering more than they would: “That usually put them in a better mood.”

House Majority Leader Eric Cantor (R-Virginia) assailed the fiscal-cliff legislation today, calling it “a classic example of putting 98.5 per cent of the American people ahead of the rest of the country.”

Offering words of hope to the top 1.5 percent, Mr. Cantor said, “In a few months we’ll have the next debate about the debt ceiling. As God is my witness, we will try to do a better job of bringing this nation to the brink of Armageddon.”

But to billionaires such as Harland Dorrinson, a longtime super-donor to the G.O.P., such assurances ring hollow: “If the fiscal-cliff deal is the kind of performance we can expect from Republican politicians, what’s the point of owning them?”

How much longer you think this RINO/’Republican’ shit is gonna last?

John Boehner looks just like like Underdog;and Pelosi is Polly
Purebred.They should make some of that cartoon-porn,but with them playing the live-action cartoon characters.That would be SO hot.

Better keep it away from her husband just to be safe.

I’d like to get it on with John Boehner’s tanning bed.

lol, my favorite poster is back! Yay!

what were the vote totals for each ?

So happy for him…pass the man some tissues.

CUT, Cap and Balance Act of 2011 (or HR 2560) Reduce non-security discretionary spending below 2008 levels, which saves $76 billion.
$35 billion cut to non-veterans, non-Medicare, non-Social Security mandatory spending. Defense budget at President’s level. Nothing was brought up. Nothing? Some negotiator, not.

The Warren Buffet Rule. A full 22,000 households that made more than $1 million in 2009 paid less than 15 percent of their income in income taxes — and 1,470 managed to pay no federal income taxes on their million-plus-dollar incomes, according to the IRS.

And, the very wealthiest American households are paying nearly the lowest tax rate in 50 years— some are paying just half of the federal income tax that top income earners paid in 1960. But the average tax rate for middle class families has barely budged. The middle 20 percent of households paid 14 percent of their incomes in 1960, and 16 percent in 2010.

What is the Buffett Rule?

The Buffett Rule is a simple principle that everyone should pay their fair share in taxes. No household making more than a $1 million should pay a smaller share of their income in taxes than middle-class families pay.

This is all you had to offer John, you moron! Solved…Next!

The thing that concerns me most is that people will post their thoughts on social media sites, but what are we really doing to create change? I personally think it’s past time to bring Lindsay home, get Nikki out of Columbia, just for starters. We should hold everyone accountable who voted in favor of the resolution to this “so-called” fiscal cliff. I mean come on, the people who were in danger of seeing a tax increase were the ones voting. Do you really think they’d let this thing lapse?

I was watching “Tommy Boy” the other night and one thing Dan Aykroyd said is sad, yet so true.

Check your paychecks on 1/15, you dumbass libtard Obama voters – they just went down. Your Savior has fucked you out of your private health insurance, devalued your savings, driven up the cost of gasoline and food, and saddled you with real unemployment of over 15% – over 30% for his “brothers and sisters” (the “folks”) – retirees on fixed income are screwed, and SSI and Medicare are headed down the path of insolvency.

And now, to avoid addressing the real problem – which is that the federal government spends too much fucking money – your hero Barak Obama and a majority of the Congress, D’s AND R’s, have raised your taxes and increased spending, and will do so again and again and again until there is nothing left.

That is the nature of socialism.

Wow, just got my first check of year, and yes, I see the 2% I’m now giving back to Social Security; the 2% we were all stealing from SS the last two years (btw, that was part of the stimulus plan that so many say did nothing).

Must be Joe Wilson. He’s the village idiot.

1. People who object to having the fruits of their labors taken from them by the Government are stupid.
2. It is smart to want to pay more taxes.
3. Paying higher taxes helps the economy.
4. Successful people are either fortunate or dishonest.
5. Money and property should be taken away from the rich and given to the poor by the Government.
6. When the economy is slow it is because the Government is not spending enough.
7. Spending is good and fun. Saving is bad and boring.
8. Republicans are evil and wicked and selfish and want poor people to starve and die from lack of health care.
9. Budget surpluses are best because it is good to give the Givernment more money than it needs.
10. All people are equal. If you have “too much”, it should be taken from you so we can all be more equal.

“A choice between Boehner and Pelosi isn’t a choice at all – unless of course you believe selecting a red versus a blue condom is going to make any difference in the ass-raping your government is going to administer to your wallet this year.”

Truer words were never spoken, FIts!!!!!! Someone educate me here, please. How are the candidates for this position selected? Is it a birthright thing or what? Why this total non-choice? I like Mulvaney’s approach. When you are given a choice between a piece of shit and a turd, what else can you do?

To be elected as Speaker, a candidate must receive an absolute majority of all votes cast for individuals, i.. excluding those who abstain. If no candidate wins such a majority, then the roll call is repeated until a Speaker is elected. The last time repeated votes were required was in 1923, when the Speaker was elected on the ninth ballot.[3]

The new Speaker is then sworn in by the Dean of the United States House of Representatives, the chamber’s longest-serving member.

So far, the Democrats have always elevated their minority leader to the Speakership upon reclaiming majority control of the House. However, Republicans have not always followed this leadership succession pattern. In 1919, Republicans bypassed James Robert Mann, R-IL, who had been Minority Leader for eight years, and electedFrederick H. Gillett, R-MA, to be Speaker. Mann had “angered many Republicans by objecting to their private bills on the floor” and was also a protégé of autocratic Speaker Joseph Cannon, R-IL (1903–1911), and many members “suspected that he would try to re-centralize power in his hands if elected Speaker.”[4] More recently, although Robert H. Michel was Minority Leader in 1994 when the Republicans regained control of the House in the 1994 midterm elections, he had already announced his retirement and had little or no involvement in the campaign. Including the “Contract with America”, which was unveiled six weeks before Election Day. Michel opted not to seek re-election because he had been isolated in the caucus by Minority Whip Newt Gingrich and other younger and more aggressive Congressmen.