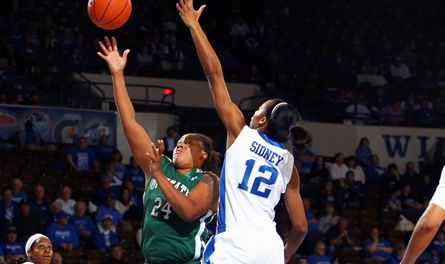 Whether it’s sex scandals or, um … whatever this is … the University of South Carolina-Upstate hasn’t exactly distinguished itself this year.

The Spartans’ year of distinction continued over the holiday weekend when the USC-Upstate women’s basketball team was throttled by Kentucky.  Final score?  100-34.  That’s right … 100-34.

“Spartans Struggle at No. 9/8 Kentucky” a press release from the school’s athletics department observed.

So to recap, taxpayers are shelling out $87.8 million this year to fund USC-Upstate, which for reasons surpassing understanding not only exists but fields a friggin’ women’s basketball team.  Not only that, over the weekend we paid to send that women’s basketball team, its coaches, trainers and support staff to Lexington, Kentucky – where they played slightly better than a bunch of geriatrics in wheelchairs.

Finally, taxpayers paid some public relations flunkie-turned-aspiring-athleticrat to put out a press release describing the epic beat down as a “struggle.”

Every day this website argues for cutting government – and rebating those savings back to taxpayers.  USC-Upstate’s $87.8 million budget is a prime example of what we’re talking about.  In fact it’s past time that all of our government-funded institutions of higher learning pursue their destinies as private institutions.