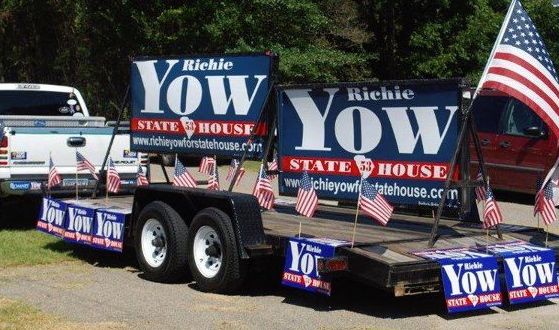 Richie Yow strikes us as a little over-the-top on certain issues … which is why we were hesitant to endorse him.

“Richie has painfully watched the decline of America’s moral values, the erosion of our Christian heritage, the outrageous disregard for the U.S. Constitution and the despicable legal attacks on South Carolina by the Obama administration,” his website states.

Hmmmmm-kay … we’re not necessarily disagreeing … but what about the decline of South Carolina income levels?  The erosion of our SAT scores?  The outrageous disregard for an efficient and accountable state government?  And the seemingly incessant parade of despicable sellouts perpetrated by our “Republican” elected officials?

Those are the sort of issues that members of the South Carolina House of Representatives ought to be addressing, in our humble estimation.

Having said that, Yow’s credentials have been vouched for by some pretty solid folks … most notably U.S. Reps. Mick Mulvaney and Jeff Duncan.  He’s also benefited from the endorsement (and daily hard work) of GOP activist Renee Knight Woodberry, one of the few honest-to-God good people in the largely irredeemable Palmetto political universe.

When people like Mulvaney, Duncan and Woodberry tell us things … we trust them.  And we’re trusting them when they tell us that Yow will be “right” on the tax, spending, academic and structural reforms that matter to us (and more importantly to our state).

Wait … hold up … Ted Vick?  Didn’t this guy drop out of this race in disgrace a few months ago?  And wasn’t he recently named one of the ten worst political candidates in the entire nation?

After getting pulled for speeding and DUI (with illegal handgun and a 21-year-old woman not named Mrs. Vick in his car) back in the spring, this ethically challenged Democrat – and self-proclaimed “preacher of the gospel” – dropped out of his United States congressional race.  However he never abandoned his bid to be reelected to the S.C. House.

Apparently he was hoping his constituents would forget about that …

Vick is a hypocrite on social issues, a liberal on fiscal ones and if that weren’t bad enough he’s connected to some pretty shady folks in the notoriously shady Pee Dee region of the state.  Accordingly, we would urge voters in Chesterfield County to support Richie Yow in this election.