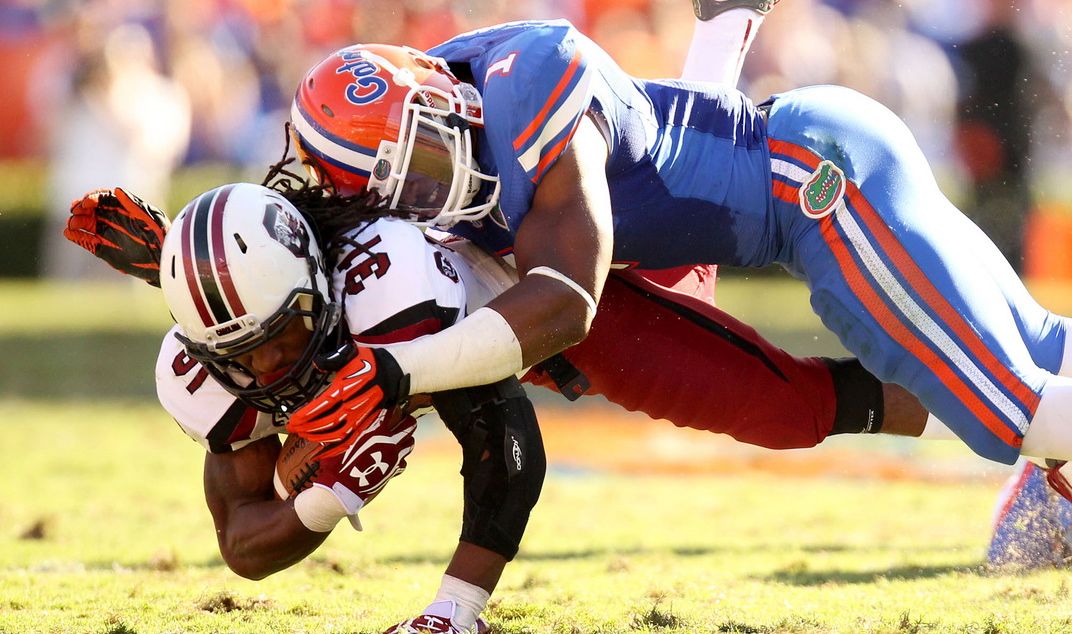 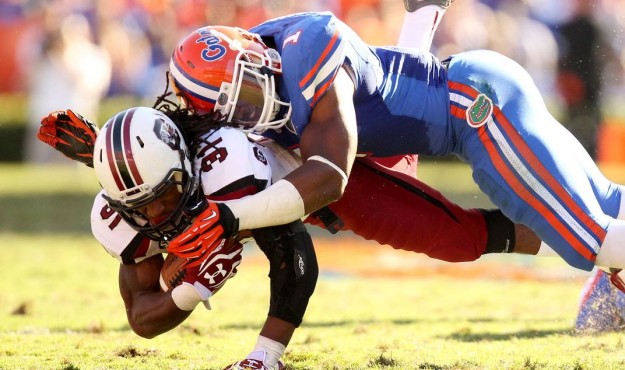 SOUTH CAROLINA HUMILIATED BY FLORIDA IN THE SWAMP

Suddenly, the University of South Carolina’s dream football season seems more like a nightmare. Head coach Steve’s Spurrier’s program – which was supposed to have evolved into a national championship contender capable of beating anybody on its schedule – got steamrolled by No. 2 Florida in “The Swamp” this weekend.

The loss effectively ends USC’s hopes of winning the SEC Eastern Division championship – and leaves Gamecock fans scratching their heads as to what the rest of their team’s once-promising season will look like.

After spotting the Gators (7-0, 6-0 SEC) three touchdowns off of turnovers in the first half, the seventh-ranked Gamecocks (6-2, 4-2 SEC) laid down and died in the second half – putting up negative yardage until midway through the fourth quarter when the outcome of the game was no longer in question. 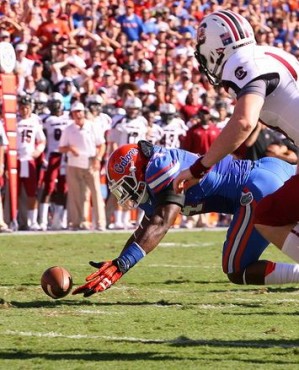 The Gator “D” recovers a fumble on USC’s first play from scrimmage.

The end result? A 44-11 dismantling that had Gamecock fans recalling lopsided beat downs of previous years – humiliating defeats that this talented South Carolina team was supposed to be incapable of absorbing.

“It was embarrassing for us,” Spurrier said after the game. “Very embarrassing the way we lost.  It could have been a heckuva game for everybody but instead we basically laid the ball on the ground and said we don’t want this thing bad enough.”

Two weeks ago, USC was the toast of the college football world after administering a 35-7 smack down at home against then-No. 5 Georgia – rising all the way to No. 3 in the nation.  Last weekend, though, a loss on the road against LSU exposed serious weaknesses – mainly on offense.

This week?  The wheels came off.

In the second quarter – after several Florida defensive penalties helped the Gamecocks stop the bleeding – USC coughed up the ball on back-to-back kick returns.  First, USC’s star punt returner Ace Sanders was stripped while returning a Kyle Christy punt midway through the second quarter – which the Gators quickly turned into a 14-3 lead.  On the ensuing kickoff, Damiere Byrd fumbled – setting the Gators up with a first-and-goal from the USC one-yard line.  Two plays later it was 21-3 Florida – despite the fact that the Gators only accumulated 29 yards of total offense in the first half.

Shaw – who was benched by Spurrier for the second half – completed just nine of 20 passes for 72 yards in losing for only the third time as USC’s starter.  After throwing just eighteen incompletions through his first five games of 2011, Shaw has now misfired 26 times in his last two games.

Meanwhile one-time Heisman Trophy candidate Marcus Lattimore – who didn’t start the game after bruising his hip earlier in the week – was held to a career-low 13 yards on only three carries.

After the intermission, things went from embarrassing to downright shameful for South Carolina.  Held in check offensively for the first two quarters, Florida embarked on a ten-play, 59-yard drive to open the third quarter – a drive that was capped by a 6-yard touchdown run from Omarius Hines.  USC did block the extra point – with cornerback Vic Hampton taking it to the house for two points – but that was the last flash of life the Gamecocks’ showed. 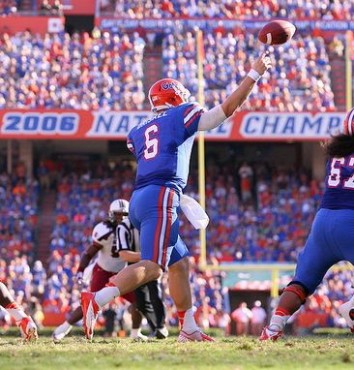 USC went three and out on its first two possessions of the half with backup quarterback Dylan Thompson in the game, and Florida capitalized with a pair of scoring drives to extend their lead to 37-8 entering the final stanza.

Thompson finished the game with even worse stats than Shaw, completing only eight of 20 passes for 83 yards with one interception.

Who will start for USC next week? Spurrier says he hasn’t made up his mind yet.

Meanwhile Florida’s Driskel finished with only 93 yards passing – his third straight sub-100-yard game – but he matched his season total with four touchdown passes.  USC also held the SEC’s No. 2 running back Mike Gillislee to a season-low 37 yards on 19 carries.

Despite the lopsided score, South Carolina actually outgained Florida 193-181 in this game – although USC picked up 86 of those yards against Florida’s second-team defense late in the fourth quarter.

Florida picked up the vast majority of its yardage during the pivotal third quarter.

So where do the Gamecocks go from here?  That’s a good question … there were moments during the first half of Saturday’s game when USC’s defense looked absolutely unstoppable, but the Gamecock offense simply couldn’t capitalize on its early opportunities.  And after the back-to-back special teams fumbles spotted the Gators an eighteen-point lead, USC basically gave up.

Not just on this game … but on its season.

That was the most depressing takeaway from this game – not necessarily the mistakes the Gamecocks made in the first half to put themselves in a hole, but the way they completely threw in the towel in the second half.

South Carolina has four games left to redeem itself – although at this point the best that Spurrier’s squad can hope for is to equal last year’s historic 11-2 season.  Speaking of Spurrier, the Ol’ Ball Coach slipped to 3-5 against Florida – the team he led to six SEC titles and one national championship during a 12-year run from 1990-2001.

USC will try to get things back on track at home against Tennessee next weekend.  After an open date the first weekend of November, the Gamecocks play Arkansas and Wofford at Williams Brice Stadium before heading on the road against arch-rival Clemson.  Head coach Dabo Swinney’s Tigers are the lone ranked opponent remaining on USC’s schedule.