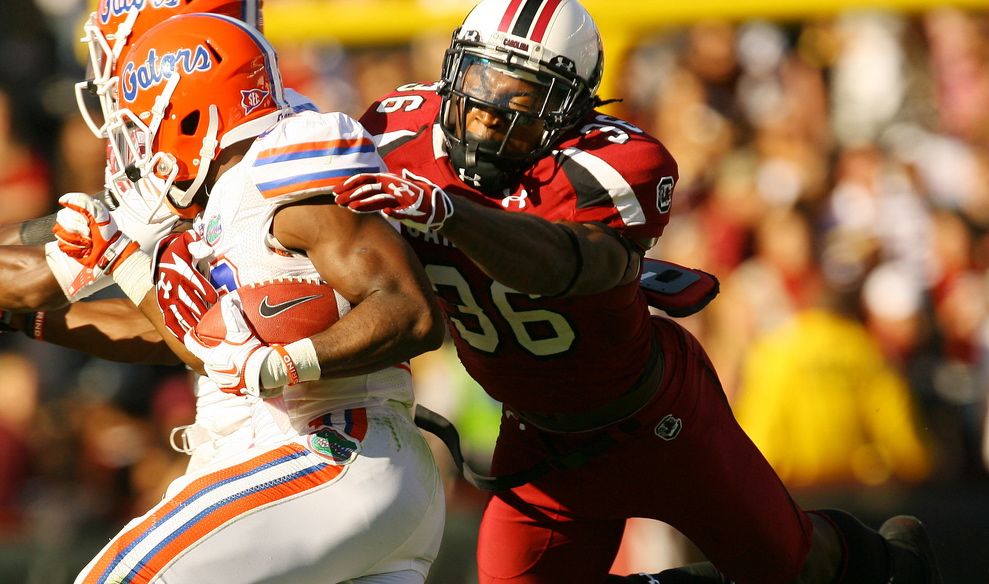 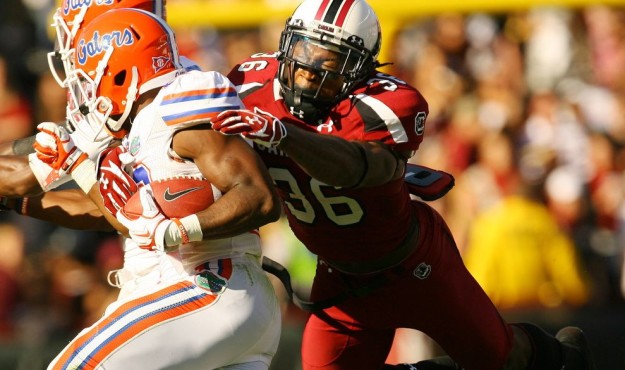 GAMECOCKS LOOK TO GET BACK ON TRACK AGAINST NO. 2 GATORS

By John Loveday || After playing mediocre football and coming up two points short against LSU on the road, the University of South Carolina football team must now flush that sour taste out of their mouths and focus on the task at hand.

It’s a doozy, too.  Second-year head coach Will Muschamp has the Florida Gators unbeaten, ranked No. 2 in the Bowl Championship Series standings and looking to win the SEC East for the first time since 2009.  To do that, they’ll likely have to run the table over the next three weeks against the Gameoccks, UGA, and Missouri.

Over that same stretch South Carolina will look to claim its second SEC East title in three years by defeating the Gators, Tennessee Volunteers and Arkansas Razorbacks.

Their first step?  Winning in “The Swamp,” something USC has done just once previously.

After winning six straight games to start the season, No. 7 South Carolina (6-1, 4-1 SEC) suffered its first defeat at the hands of LSU last week. How this team adjusts and responds to adversity will determine if this season turns out to be average, good, or great.

Florida is ranked sixth in the country in scoring defense, giving up only 12.3 points per game.  Similar to LSU, the strength of the Gator defense is their ferocious defensive line and linebacker corps.  Two weeks ago, Florida held LSU to only 46 rushing yards.  Last week, LSU held the Gamecocks to only 34 rushing yards. Unless USC offensive line coach Shawn Elliot finds some magical formula to improve the run blocking dramatically in one week, this one could get ugly.

South Carolina can’t expect to have consistent success running the football against the Gators unless they keep the defense off balance – something they couldn’t do against LSU.  The Gamecocks will need to start the game off with plenty of short to mid-range passes to force the Florida defense back.  Wide receiver screens, slants, and short comeback routes should open up the rushing attack for Connor Shaw and Marcus Lattimore (assuming he can play).

Lattimore has been slowed this week due to a hip injury – and while he’s traveling with his teammates to Gainesville, Spurrier has made it clear that he isn’t going to start the game. If Lattimore is unable to go, look for Spurrier to give freshman Mike Davis and senior Kenny Miles more carries than normal.  Davis, a high school All-American, was a Florida commit for most of the recruiting process.  After some recruiting shenanigans by Florida, Davis decided to pull his commitment and later committed to the Gamecocks.  The brother of former Clemson running back James Davis, this 5-foot-9, 216-pound freshman has loads of potential and a bright future ahead of him.

A more speedy back than Lattimore, Davis could bring a new dimension to the Gamecock offense.

The Florida offense has several striking similarities to the LSU offense the Gamecocks faced last week.  First-year offensive coordinator Brent Pease starts with the run – which has paid all sorts of dividends thanks to the emergence of senior running back Mike Gillislee. In fact, the Gator rushing attack is so productive that Florida is currently ranked second in the SEC in rushing offense. The one major difference between FLorida and LSU on offense is that the Gators are equipped with a mobile quarterback, sophomore Jeff Driskel.

Through six games Driskel has outrushed most quarterbacks in the SEC – including Connor Shaw.  Shaw has rushed the ball 76 times for 280 yards and 1 touchdown. Driskel has rushed the ball 57 times for 326 yards and 4 touchdowns. On the surface, the 6-foot-4, 237-pound Driskel would appear to be a little more durable than Shaw. A weakness for the Florida offense is their passing attack, as they are currently ranked dead last in passing offense in the SEC – a major shift in philosophy from the Steve Spurrier era.

Clearly, the Gators are a run first team.

Speaking of the run, LSU ran the ball at the Gamecocks over … and over … and over. Look for the Gators to adopt a similar philosophy on Saturday against USC.  If the South Carolina defense gives up another 200+ rushing effort to the Gators, USC’s chances of victory will decrease dramatically.  If defensive coordinator Lorenzo Ward can make adjustment this week and get his front seven focused on tackling and playing their assignments, USC will have a chance.

Were it not for kickoff returner Bruce Ellington and punt returner Ace Sanders, this USC special teams unit would be among the worst in the league. The kicking game continues to be inconsistent for the Gamecocks, as does kick off and punt coverage. If a last second field goal is needed to win the game, it’s not clear whether USC could make it happen.

On the other side of the ball, Florida’s Andre DeBose is one of the best kickoff/punt returners in the SEC. If the Gamecock kickoff coverage unit doesn’t play their assignments, DeBose will make them pay.  In close games – as this one may wind of being – special teams usually play a big part in the outcome of the game.

The fact this game kicks off at 3:30 p.m. versus 7:00 p.m. EDT could be important. All stadiums across the country get much more hostile at night – as the added time allotted for tailgating “festivities” promotes a more energized crowd.  Perhaps playing under the lights brings a new dimension to the game.  Whatever the reason, the earlier this game is played – the better USC’s chances are.

Maybe so, but the Cocks are currently 10-0 against Florida, Georgia, Tennessee, and Clemson. Not too bad.

Well I was pretty close… I didn’t think they’d suck quite as bad as they did today.

Is Lattimore even in the top 200 in rushing this year?

Put down the bong John and quit being such gamecock homer

I used to have ESPN.

Another good one, random comment posters schooling the new contributor

Thanks for the work, John…

EXPOSED…What a bunch of thugs!!! Late hits, chip blocks. Best lineman in the country is taking a break

Reports of the demise of the Chicken Curse™ have been greatly exaggerated.

USC shit the bed tonight but will still own clemsux