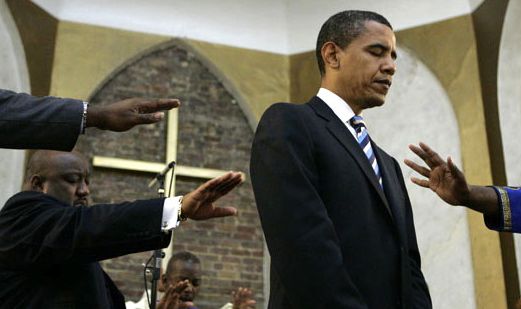 DOES SHE HAVE A POINT?

One of the South Carolina Republican Party (SCGOP)’s top staffers is questioning U.S. President Barack Obama’s Christian faith, arguing that the leader of what used to be the free world is trying “to remove God from our country.”

“I can’t help but think that our president is of some other religion than Christian,” SCGOP field director Delinda Ridings wrote recently on her Facebook page. “Personally, I believe he is atheist.”

Wait … not a Muslim?  Ridings goes onto say that she feels this way about Obama because he takes “life so lightly.” 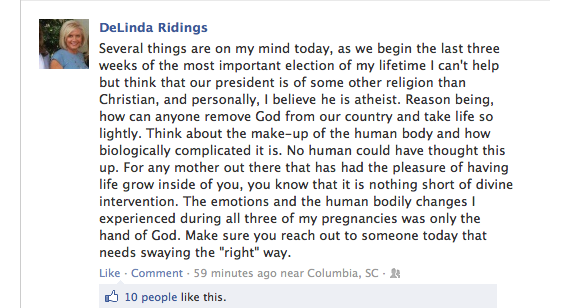 So … does Ridings make a compelling argument?  Possibly … at least until you plug the GOP’s own nominee into the equation.

This website doesn’t wear the abortion issue on its sleeve, but as we’ve noted on numerous occasions we believe that the right to life is “the most fundamental of all the liberties guaranteed under our Constitution.”  Without it, the other liberties really don’t matter all that much.

That’s why it disappoints us that GOP nominee Mitt Romney continues to be all over the map on this issue. We pointed this out to Ridings –  along with the fact that Romney isn’t a Christian, either.

She wasn’t having it.

“He says he is (a Christian) and believes in God and wants him involved in this country,” she replied.

Yeah … Romney says a lot of stuff he thinks people want to hear.  But can you trust any of it?

At the end of the day, though, we’re inclined to agree with Ridings’ basic assessment of Obama – of course we don’t particularly care one way or the other whether an elected official subscribes to a certain religion.  We’ll take an atheist willing to confine government to its core functions over a Bible-thumping, crony capitalist “Republican in Name Only” any day of the week.

In fact we believe a lot of “pressing” societal issues (including the debate over gay marriage or prayer in schools) could be solved simply by taking government out of an area where it has no business in the first place.

“Between this comment and the offending remarks made by (SCGOP chairman) Chad Connelly about how Democrats view abortions as a ‘rite of passage,’ like going to prom, it’s becoming increasingly evident that the Republican Party has gone over the edge,” said Amanda Loveday, executive director of the S.C. Democratic Party.

Thomas Peterffy Had Us …