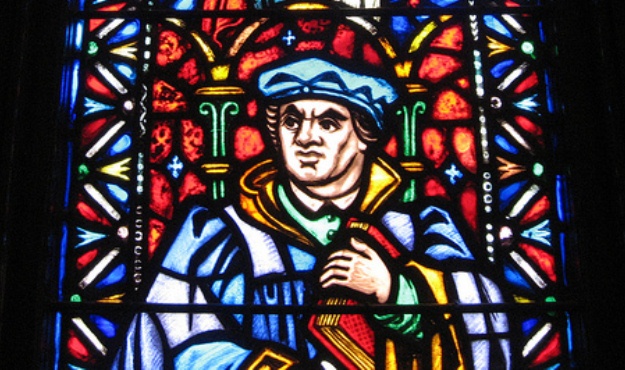 A REFORMATION DAY LESSON ON DEMOCRACY

By Larry Marchant || Last weekend many protestent churches celebrated the Reformation of the Catholic Church. But I believe people of all faiths should stop and pause, because Martin Luther’s actions have a much larger, ripple affect – extending far beyond church doctrine.

A priest and professor of theology, Luther’s frustration reached a boil – and he proposed ninety-five changes to the Catholic Church. But rather than dropping his “suggestions” in the employee suggestion box, he nailed them to the church door at Wittenberg, Germany.

Among other issues Luther protested indulgences as well as the broader notion that parishioners must make payments to secure a deceased loved one’s place in heaven.  He also questioned the church’s ban against married priests. Further, Luther believed that the Church placed far too much importance on worshiping Mary, the mother of Jesus.

After receiving Luther’s “nasty-gram,” the Pope went ballistic and called for an immediate inquiry into the audacity of this brazen professor, referred to as the “Diet of Worms.”

Luther was deemed a heretic, excommunicated from the Church, and a bounty was placed on his head. Luther ran, locking himself in a room for over a year and transcribing the Bible into German.  This did not sit well with the Church, as they insisted that the only way to know the Bible was through the teaching of Rome.

Around the time Luther finished his translation, Johannes Guttenberg invented the modern-day ink stamped printing press.  Flyers announcing the new publication were dispersed through the land, and the ability to read and interpret holy text for oneself spread like wildfire.

Disavowing the Church’s doctrine on marriage, Luther married Katherina Bora – a former nun.  Not long after, war erupted in Germany over the division of the Church and continued for several years.  Finally, the fighting stopped.  My feeling is the German royal family told the Vatican that if it refused to back off – Germany would no longer supply it gold, so the Vatican’s army retreated to Rome. But again, that’s just my take on it.

After Luther’s death, the Black Plague engulfs large cities throughout Europe, and Luther’s widow Katherine – poor and living off parishioners’ kindness – flees to the countryside to escape the plague. Severely injured in a cart accident, she died not long thereafter.

So if you hear someone talking about the Reformation, remember its importance for each of us, not just Lutherans. You see, Luther’s belief in the individual has been credited with commencing the modern democratic form of government that the Western world enjoys today.

Luther’s fundamental, revolutionary belief – that people should have the right to read and interpret the Bible for themselves – was unheard of at the time.  Two hundred years later, though, democracy is born under the same theory of the common people’s God-given rights – including free speech and freedom of the press.

So regardless of your faith or particular denomination, let us all be thankful for Luther’s sacrifice, something we too often take for granted today: the right to make our own decisions and have our own thoughts.

God bless Martin Luther, and God bless us all.

Larry Marchant is a member of Ebenezer Lutheran Church in Columbia, South Carolina.