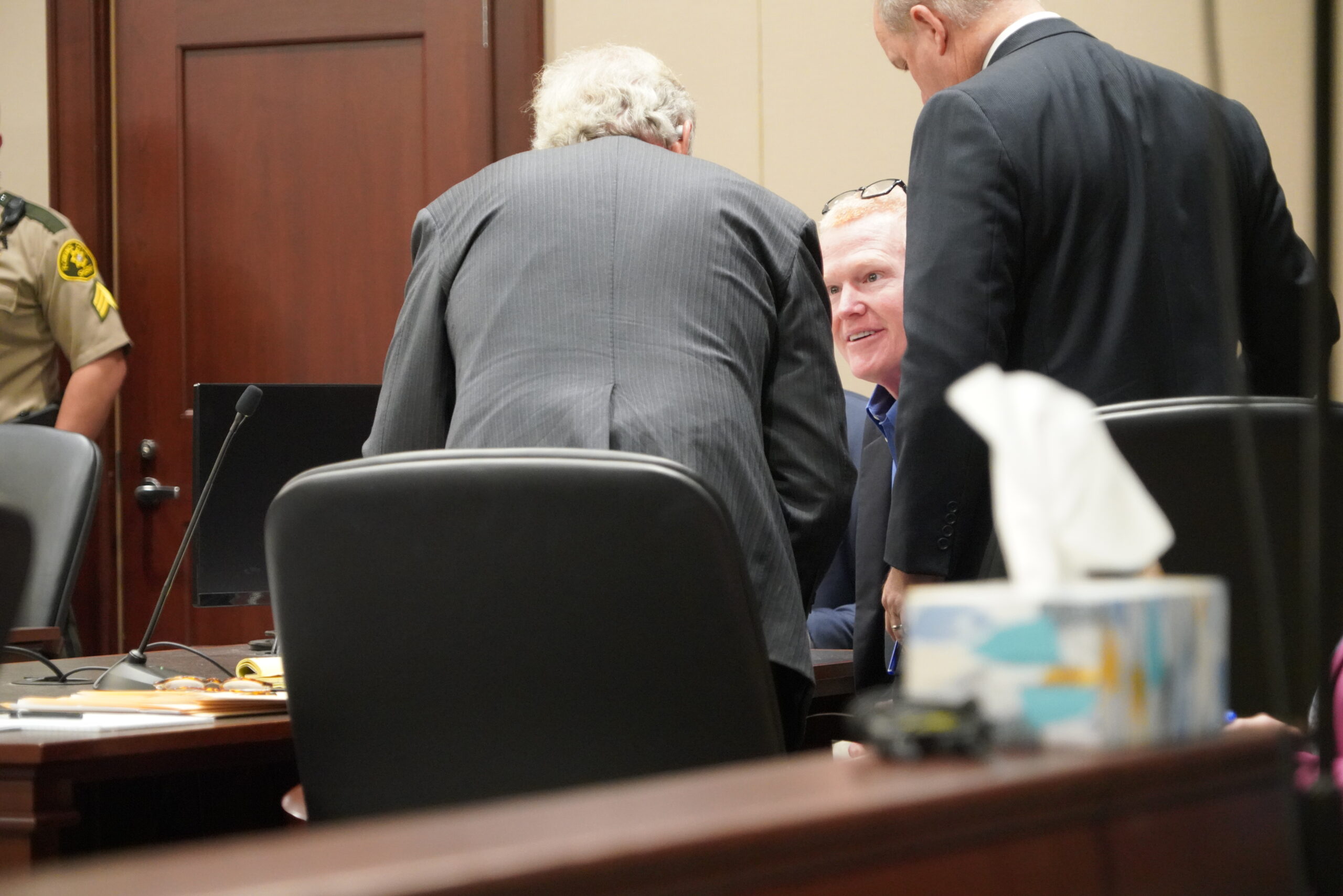 After poking what certainly appeared to be some significant holes in the evidence the state of South Carolina is preparing to submit against their client, attorneys for disbarred lawyer/ accused killer Alex Murdaugh are now zeroing in on what they have long contended is the achilles heel of the prosecution’s case – a lack of motive for the crime.

In a filing submitted in Colleton County this week, Murdaugh’s attorneys – state senator Dick Harpootlian and veteran Columbia, S.C. trial lawyer Jim Griffin – are asking the office of attorney general Alan Wilson to “file a bill of particulars stating the alleged motive it intends to present at trial.”

According to the motion (.pdf), Griffin and Harpootlian are seeking this information so they can “adequately prepare a defense and … avoid unnecessarily extending the trial by weeks.”

Assuming they are able to prove Murdaugh’s guilt beyond a reasonable doubt based on the evidence … do prosecutors need to supply a motive for the commission of these crimes?

No … but according to Harpootlian and Griffin, the state has claimed the murder charges are “inextricably intertwined” with a deluge of financial charges filed against Murdaugh related to his alleged fleecing of his former clients at the Peters, Murdaugh, Parker, Eltzroth & Detrick, P.A. (PMPED) law firm.


As of this writing, Murdaugh is staring down 90 individual counts of alleged criminal activity involving “schemes to defraud victims” of nearly $9 million.

“Until now, this state has never had a prosecution in which millions of pages of documents purportedly supporting over eighty counts of various financial crimes allegedly committed by the defendant are declared to be, in some vague way ‘inextricably intertwined’ with murder charges against the same defendant,” Harpootlian and Griffin wrote in the filing. “If the defense must wait until trial to discover what (if anything) that means, the result will be an extension of (the) trial by weeks and continuances within the trial, while defense counsel review documents and make motions.”

The lawyers went on to note that this would “risk introduction of testimony or evidence later deemed inadmissible, which in turn could create extended debate on curative jury instructions and, ultimately, avoidable appellate legislation.”

Talk about laying the groundwork for the mother of all appeals …

“It would be fundamentally unfair to allow the state to ambush Murdaugh at trial with a surprise theory about how some unproven non-violent prior bad act should be admitted as evidence he murdered his wife and son, while claiming the defense was given notice of the purported evidence just because the state dumped 1.2 million pages of documents of unknown relevance on the defense,” Harpootlian and Griffin wrote.

Murdaugh’s attorneys have been challenging the state on its theory of motive since August – one month after Murdaugh was indicted for the graphic June 7, 2021 murders of his wife, 52-year-old Maggie Murdaugh, and their younger son, 22-year-old Paul Murdaugh.

During a hearing in Spartanburg, S.C. on a Murdaugh-related civil case, Harpootlian said the state had presented “not much, if anything” related to a possible motive for the murders.

That remains the case as of this writing. As I noted in a video preview of this filing, “up to this point state prosecutors have not presented much in the way of a rationale” for the savage slayings.

“In fact, we learned more from a recent federal trial of one of Alex Murdaugh’s accomplices about his motive than we have learned from the state,” I added.

For more on that federal trial (and what it uncovered), click here …

According to the defense motion, Murdaugh is only asking the state to “articulate the motive … with reasonable particularity,” providing him with “some minimal guidance so he can prepare for trial.”

The double homicide Murdaugh stands accused of committing lies at the very heart of the ‘Murdaugh Murders’ crime and corruption saga. This still-unfolding Southern Gothic saga chronicles the fall of the “House of Murdaugh,” a powerful legal dynasty which ran the Palmetto State’s Lowcountry like its own fiefdom for more than a century.

This isn’t the first – and won’t be the last – chess move by these two veteran attorneys as we approach Murdaugh’s upcoming murder trial, set to commence on January 23, 2023 in Colleton County, S.C.

The only question? How the state will respond …

Back in October, prosecutors fired back with specificity when Harpootlian and Griffin submitted a motion demanding they provide a timeline for the killings.

What did they have to say in response to this motion? Not much …

“We won’t comment other than what we file with the court in response,” attorney general spokesman Robert Kittle said.

ANOTHER SWIPE AT THE FORENSICS …

In addition to the ostensible purpose for this filing – nailing down the state’s theory of motive for the double homicide – Harpootlian (above) dropped a potentially significant piece of information in a footnote of the pleading.

In describing examples of “alleged prior bad acts” which were “improperly admitted into evidence,” the attorney cited the case of former Indiana State Police (ISP) trooper David Camm – who spent thirteen years in jail for the murders of his wife and two young children.

According to Harpootlian’s jaw-dropping footnote, Camm was accused of these crimes “largely based on bogus blood spatter expert opinions offered by, among others, Tom Bevel.”

Tom Bevel is the Oklahoma-based forensic expert who was the subject of an extended motion filed by Harpootlian and Griffin prior to Thanksgiving. According to that filing, prosecutors were planning to submit “manipulated opinion testimony contradicted by exculpatory evidence that the state has destroyed in bad faith.”

Specifically, Harpootlian and Griffin claimed agents of the S.C. State Law Enforcement Division (SLED)  “cajoled” Bevel into changing a report he produced which originally concluded there was no blood spatter evidence implicating Murdaugh in the crime. Bevel later told SLED he was “able to filter the colors of the shirt using Photoshop” and that based on this new information, he was able to identify “over one hundred stains consistent with spatter.”

According to this new analysis, Bevel stated there was no “possible way those stains could have been created other than spatter from shooting Paul with a shotgun.”


The revelation regarding the earlier report – and the alleged “cajoling” – reportedly caught prosecutors off-guard, creating what one source described as “fresh tension” between SLED investigators and the attorney general’s office.

“This guy hurts them so they are going after him HARD,” an attorney tracking the case told me.

The real killer in the Camm case? Career criminal Charles Boney – who was “identified and convicted when, after Camm’s first conviction, unidentified male DNA found at the crime scene was finally compared against CODIS, the FBI’s national DNA database.”

That wasn’t the only major revelation contained in the footnote.

“Unidentified male DNA was also found at the scene of Maggie and Paul’s murder,” it concluded. “To date, it does not appear the state has compared it against CODIS.”

Wunderlich declined to confirm the “unidentified male DNA” – or say whether it had been tested – telling me on Tuesday evening it would be “inappropriate to comment ahead of pending litigation.”

According to my sources, the state has retained former SLED agent – and current Orangeburg County chief deputy Kenneth Kinsey – as a forensic expert in connection with this case. Kinsey was reportedly retained by the state around the time it learned of the issues with Bevel’s potential testimony.