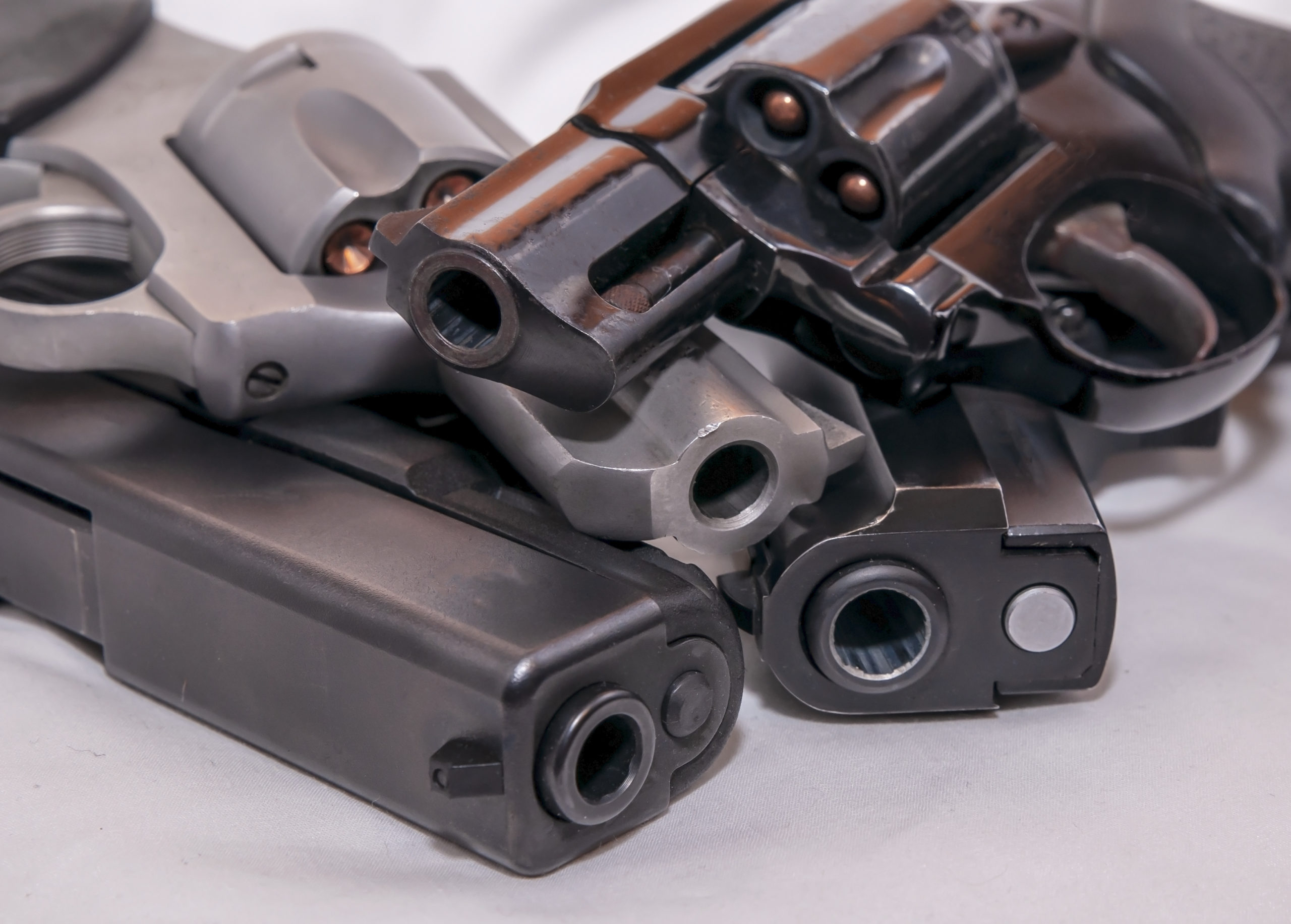 by PRIOLEAU ALEXANDER ||  America reels, as yet another mass murder has been perpetrated by a madman. To make the tragedy even more unthinkable, the shooter’s insanity was directed towards elementary-age school children.

After each of these horrific mass-murders occurs, Americans struggle with the question, “What do we do now?”

In terms of enforcing laws regarding “background checks,” the fact is someone will always slip through the cracks – or the individual being checked may not have committed any prior acts of violence. In March of 2021, there were 4.7 million background checks alone. A system that massive cannot work effectively every time—especially when run by the government.

Remember, the Texas school shooter passed an FBI background check – ergo he bought his guns with their blessing.

The first issue is the sheer number of guns currently in America. Most organizations attempting to track the number place it around 400 million. Regardless of how we got here, or whether the issue should’ve been put in check long ago … sadly doesn’t matter. We’re here. 400 million, and probably a trillion rounds of ammunition.

Second, with so many guns in circulation, it is an irrefutable fact that guns will always be available to those who want them. The cows have left the barn. How all those cows got out of the barn is a complex story, involving our European founding and the reality that as recent as 150 years ago we were still carving America out of wilderness. We literally could’ve never become these fifty United States without guns … and the government chose to never close the barn gates. Quite simply, it’s too late to do anything about those 400 million guns.

In addition, if the manufacturing of guns ended completely tomorrow, sales of used guns would still occur en masse … and plenty of them would end up in the hands of resellers who don’t care who buys them. The preferred weapon of America’s drug gangs is the AK-47, and rest assured none of them are buying them legally.

The Constitution states that the right of the people to keep and bear arms “shall not be infringed.” While modern minds might protest “they were talking about muskets,” the fact is “the musket” was modern technology back then. In the hands of a skilled rifleman, they could be reloaded and shot four times a minute.

What if Americans had turned in their muskets after the successful revolution against England? Well, the War of 1812 would’ve returned us to British rule, of course. The framers of the Constitution believed that was (and always would be) a possibility, and they granted the American people the right to own “small arms equal to those who might seek to oppress them.”

Gun control advocates press the argument, “You shouldn’t be allowed to just walk into a gun store and buy a gun.” That statement seems perfectly rational, no?

But the fact is current laws prevent that anyway. You must undergo a “universal” FBI background check, and that includes gun shows. There is no “gun show” loophole. Everyone legally buying a gun gets a thumbs up or thumbs down by the FBI.

One area the gun control advocates are correct on is the private sale of guns. I can sell one of my guns to a buddy, and that’s that. The government doesn’t know. Should private sales be illegal? The realistic answer goes back to the fact that there are 400 million guns in circulation—no entity on the planet, even the KGB x 1,000, could enforce a law like that. Making private sales illegal would just create another new unenforceable law.

The place where both sides completely agree is criminals and the mentally ill should not be able to own guns. Obviously our attempts to keep guns out of criminal’s hands has utterly failed, but what about the mentally ill?


The front line dealing with mental illness is the Emergency Room. All day, everyday ER teams deal with schizophrenia, depression, delusions, PTSD, and paranoia. They know damn well some of these people are — to use the parlance of our times — nuts.

An uninformed observer might say, “Then it’s the ER docs job to commit them.”

Okay … where? There are almost no in-patient publicly-funded mental health facilities in America. So where does the doctor commit them? Even if they can find a bed, Americans are a free people. You can’t just go around sending people to an insane asylum on a hunch. And if they could and did, both the doctor and the facility would be open to medical malpractice. The committed individual could hire a lawyer to get them out, find a for-hire psychiatrist to say they were fine all along, and off to the jury it goes.

America clearly needs to address the mental health crisis that so afflicts us as a nation, but people with mental illness aren’t helpless drones who march into a clinic or a therapy session and say, “I need to be put away, or I’m going to shoot school children.” Odds are, someone seething with rage and depression so deep they are going to commit a mass shooting won’t blurt out their intentions to someone who asks, “How are you feeling?”

The L.A. Times offered a headline that said, “Texas School Shooter Displayed Concerning Behavior Before Attack.” I’m sure he did. But, as a Gen X’er, I find much of today’s teenage behavior “concerning.” Should Goth kids be surveilled? Loners and shy kids? Kids struggling with their sexual identity? Kids who read war books? Video gamers? Young conservatives, fed up with the government? Young liberals, fed up with the government?

America has more diversity and freedom than any place in the world — which leads to the widest array of opinions and personalities. Who’s crazy? I think anyone who believes it’s acceptable to abort a healthy, third-trimester baby is certifiably insane. The person who approves of that abortion thinks I’m insane to think they’re insane.

There’s another debate regarding what kind of guns are the worst — with the anti-gun crowd insisting that “military style” “assault weapons” make these shootings too easy. The pro-gun crowd states (truthfully) that the number of law-abiding “assault rifle” owners that use them to kill another person is statistically zero. The pro-gun crowd will often want to roll into the debate about ammo ballistics and semi-automatic firing capabilities, but the anti-gun crowd wants no part of that debate — nor do most understand the topic.

“Assault rifles,” they say, “are the issue, and they should be illegal to own.”

“I won’t agree to that,” says the pro-gun crowd, “because once those guns are made illegal, you’ll just start demanding the ban of the next one.”

“Beto” O’Rourke, who once famously said, “Hell yes, we’re going to take your AR-15,” likes to grandstand as the gun control tough guy. Among his ideas are:

— Make the “Red Flag system” stronger, to stop criminals and the mentally from buying guns. Well, in case you’ve never bought a gun, it is already illegal for a criminal or a mentally ill person to buy a gun. 99 percent of the time these individuals are flagged by the FBI background check. That leaves only the people who “seem odd” or “might have a propensity to commit violence.” As mentioned earlier, who makes that call? You? Maybe me? Biden? Trump? Nancy Pelosi? Ted Cruz?

–Effective safe storage and child access prevention laws. Will the people enforcing these laws also check to make sure your cabinets are childproof? Only a complete mouth-breathing moron would fail to secure their weapons from their child, and unfortunately there’s no law against being an idiot.

–Stronger domestic violence reporting laws. In the event you’ve never actually spoken with a police officer — or seen the TV show Cops — much of their time is spent breaking up domestic violence incidents, after which the abused spouse ultimately decides not to press charges. In other words, the abused spouse deems them “innocent.” Can we stop a man from buying a gun if he’s never been convicted of a crime?

I’ve presented these facts to clear-minded people many times, and the response is usually, “What the hell do you think we should do? Nothing???”


It goes without saying we need to provide real security at schools. There are so many available solutions to better protect our children that there’s no real need to opine here. We can’t seal them off from all danger, but most of these shootings could have been prevented with some basic precautions. Of course it’s sad that we need to even consider security, but America is not the place it once was.

Beyond that, there’s not much we can do … as I said, the cows have left the barn. We have 400 million guns. I suppose we could make sentences for crimes involving a gun extremely harsh, but the threat of harsher penalties rarely deter criminals. The death penalty is proof of that. In addition, the laws would disproportionately affect young black males, so the outcry of “racism” would soon drown out the demands to “do something.”

There is, however, a light at the end of the tunnel. I hope we don’t reach the end of that tunnel while I’m among the quick, but the light is coming: At some point in the future, the United States will become cashless — in the name of convenience, of course. But the proles will soon be reminded the flow of computer information can be routed by “the guy with the biggest server.”

Laws will be passed — for instance, a law demanding you turn in your guns — and those failing to turn in their guns will have access to their money turned off. Hell, we just saw it in Herr Trudeau’s fascist money grab to punish the truckers in Canada.

Someone anti-gun probably just had their heart leap with joy — as President Biden would do that right now if he could. Turn in your guns, or lose access to your banking account!

But what about when a conservative comes back into power? And uses facial recognition software to identify “mostly peaceful protestors,” and cuts off their access to their own money?

Back and forth it will go: Every time the White House pendulum swings, executive orders will cast half of America into grinding poverty. Eventually, our rulers will have us so confused, we the people will have only one party … us versus the elites. And we’ll all be cast together into government-controlled poverty.

The rich get richer, and the poor get poorer. The rich hire armed and licensed body guards, and the proles fight with knives in the streets. Meet the new boss. Same as the old boss. There’s only one story… and the gun debate is just another version of that story. Mankind is inherently evil, and we cannot save ourselves from ourselves — if we’re proles, we bleed. If we’re elites, we decide who bleeds.

Such is the nature of things.