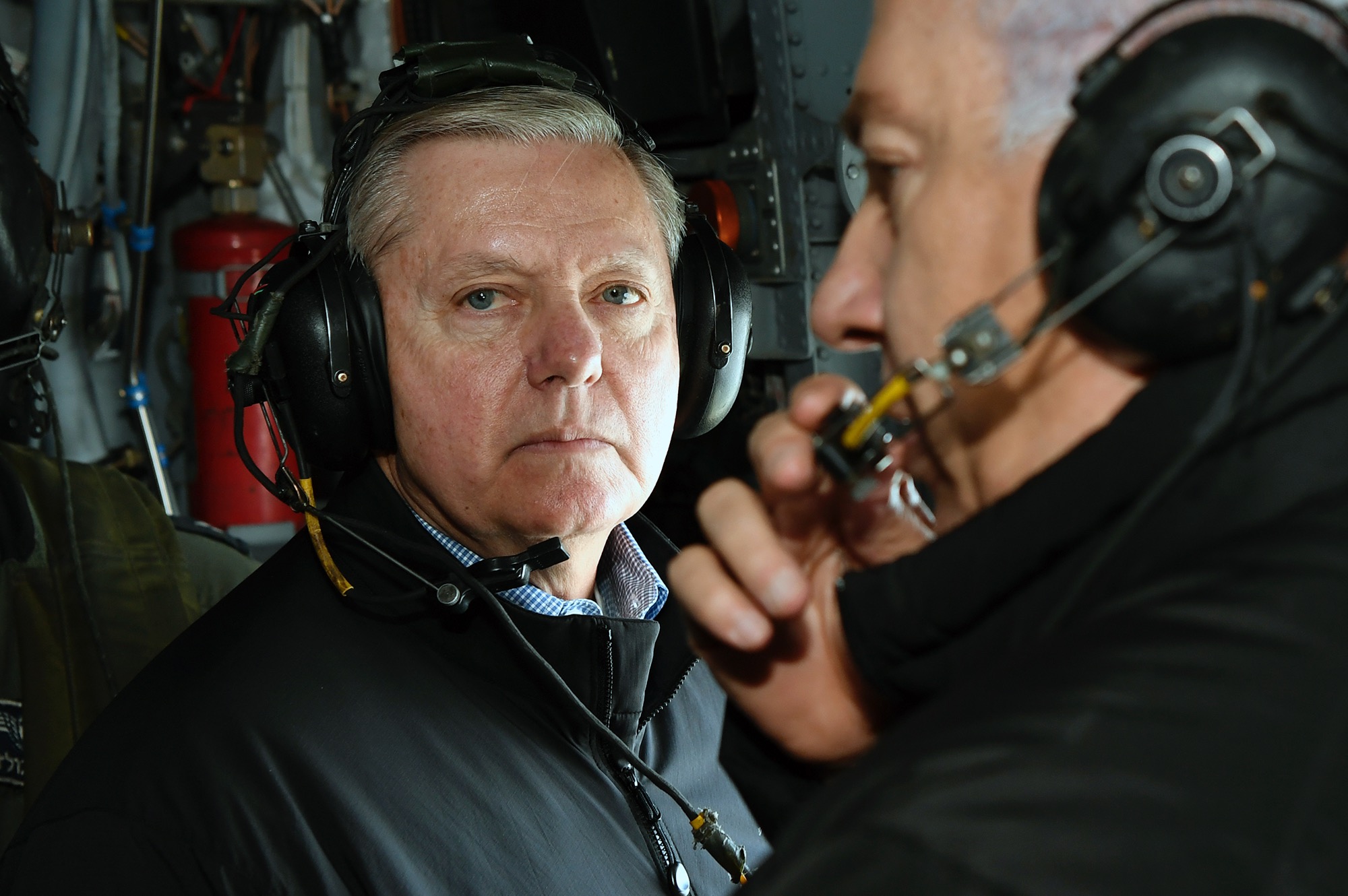 The Ides of March are here … which for U.S. senator Lindsey Graham means an opportunity to make yet another Julius Caesar reference related to Russian president Vladimir Putin.

Graham, readers will recall, urged Russians to assassinate their leader earlier this month following his invasion of Ukraine (a conflict which, informed readers know, has a decidedly American origin). More recently, Graham has called for American fighter jets to enforce a no-fly zone over Ukraine – essentially bringing the United States into direct conflict with Russia.

This morning, Graham and U.S. congressman Joe Wilson are featured in a story in The (Charleston, S.C.) Post and Courier which essentially regurgitates neoconservative talking points about the need for a more aggressive American response in Ukraine.

The story was written by “reporter” Nick Reynolds. If that name sounds familiar, he is the ostensibly impartial journalist whose one-sided “full woke” take on efforts to safeguard the integrity of women’s sports drew this rebuke from me.

Anyway, welcome to a Tuesday edition of FITSFeed, a recently launched format which focuses on news briefs, reader feedback and other stuff I probably would have posted to Twitter had that platform not decided to piss me off.

Sources are telling this news outlet there was a considerable amount of police activity at an address in Richland County, S.C. yesterday afternoon – the second time in the last week deputies and other responding agencies were summoned to the residence.

Property records indicate the home – located at 316 Silver Fox Lane – is owned by Michael T. Sauer, a well-known local veterinarian and owner of the Paws and Claws animal clinic in Lexington, S.C.

Stay tuned … we have reached out to the Richland County sheriff’s department in the hopes of receiving information on what may have transpired at this home.

UPDATE: According to a sheriff’s spokesperson, the agency “cannot provide any details on the exact location or patient information for the call we received.”

“We can’t provide a comment in this instance and can only confirm that RCSD responded to a home on Silver Fox Lane for a non-criminal matter,” the spokesperson told our director of special projects Dylan Nolan.

Thanks to Renée Wunderlich and everyone at the S.C. State Law Enforcement Division (SLED) for providing updated information on this worsening drug epidemic.

I hope everyone takes a moment to read this story …

Big story coming on the fentanyl epidemic in South Carolina …

“Reporter” Maayan Schechter of The (Columbia, S.C.) State newspaper just posted a tweet informing her followers of the news that S.C. speaker of the House Jay Lucas will not seek reelection in 2022.

Which, again, was reported first on FITSNews … yesterday.

I could say something here … but I won’t.

Done bitching about these people …

It’s official. Confirming our exclusive reporting yesterday, S.C. speaker of the House Jay Lucas just announced he will not seek another term in office in 2022. Lucas has been a member of the House since 1999 and its leader since December 2014.

“I have been a worthy servant,” Lucas told his colleagues during a brief address from the floor of the House.

Lucas was introduced by the man who will succeed him as speaker, House ways and means chairman Murrell Smith.

Yesterday this news outlet reported exclusively on a brewing leadership shuffle within the S.C. House of Representatives. Here is an update on that report with additional information regarding the status of House speaker Jay Lucas.

Stay tuned for more updates on this story throughout the day …

Bowers, readers will recall, has emerged as an ancillary figure in the ‘Murdaugh Murders’ crime and corruption saga – with his name referenced on one of the jailhouse phone calls between disgraced attorney Alex Murdaugh and his son, Buster Murdaugh.

Based on the conversation, Bowers appears to have played some role in an effort to reinstate Buster Murdaugh to the University of South Carolina law school.