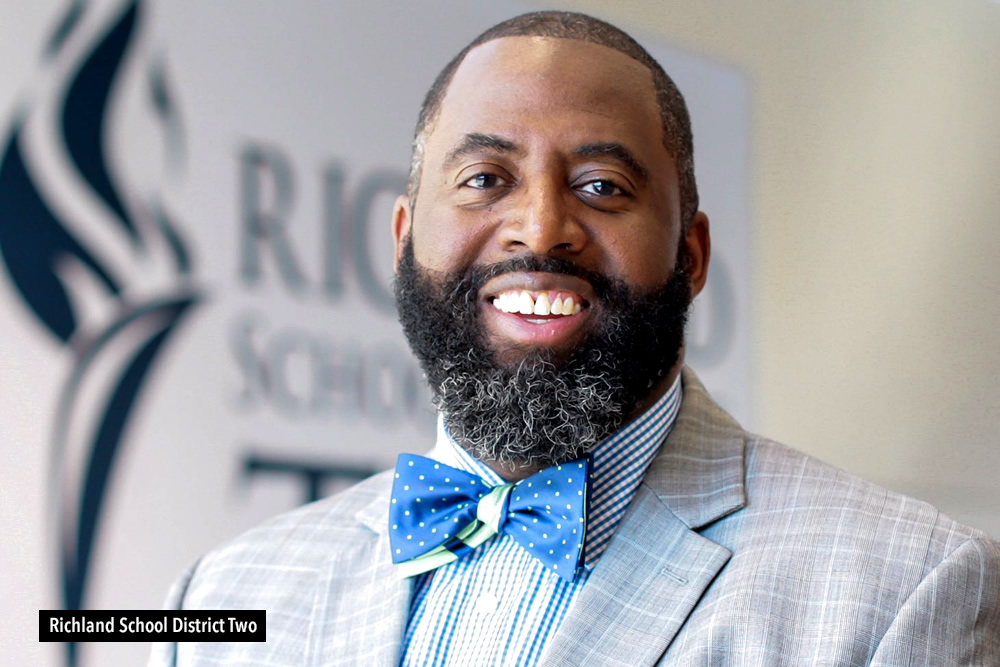 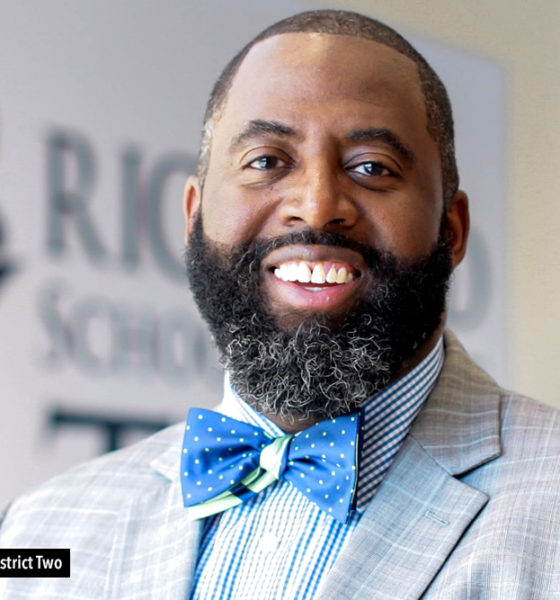 “He barreled across the room like a freight train …”

A school board meeting in the Midlands region of South Carolina devolved into a knock-off WWE event featuring the district’s top appointed official as the aggressor.

The drama went down at a Tuesday evening meeting of the board of Richland County school district two – with superintendent Baron R. Davis lashing out physically at a parent.

Tension in the district – located in northeastern Columbia, S.C. – have been rising for months as concerned parents have been questioning various school board decisions. Gus Philpott frequently attends Richland two school board meetings – and was a party to the disagreement on Tuesday evening.

Philpott has repeatedly – and publicly – criticized members of the school board. In an April 2021 guest column for a local newspaper, he alleged that school board members Amelia B. McKie and Teresa Holmes took their oaths of office prior to submitting their statutorily required statements of economic interest.

“According to South Carolina law, after you are elected, then you (1) file your SEI. Then you (2) take the oath of office, and then you (3) assume your office responsibilities,” Philpott wrote. “It’s as easy as that. 1-2-3.”

Philpott has raised these concerns, and others, at numerous school board meetings over the last few months.

According to Philpott, and other witnesses who have spoken to FITSNews, he arrived at Tuesday’s school board meeting – milling around and introducing himself to the other attendees. He talked to two strangers and also spoke with a fourteen-year-old student who was signing up to speak at the meeting – part of his habit of getting to know parents and other concerned citizens who attend these public gatherings.

Things began to go awry, however, when Philpott introduced himself to a woman he had never met before.

“I know who you are, get away, don’t talk to me,” the woman allegedly said to Philpott.

He was taken aback and confused when she began to yell at him, saying “don’t talk to me, you can’t talk to me!”

Philpott said he told the woman, “I’m not talking to you.”

Security personnel asked one of the Richland County Sheriff’s Department (RCSD) officers present at the meeting to speak with Philpott.

According to him, this conversation was “polite and professional.”

At this point, security personnel joined RCSD deputies and informed Philpott that the woman screaming at him was Pamela T. Davis, the wife of the superintendent and a teacher in the district. At this point, Richland two safety and security director Marq Claxton served Philpott with a trespass notice.

Philpott collected his belongings and left the building.


Gary Ginn, a Richland two parent who was present at the meeting, told me his version of what happened following Philpott’s ejection.

According to Ginn, the woman sitting in front of the 14-year-old (whom he didn’t yet know was Pamela Davis) began yelling “cuss words that I won’t repeat” at which point the 14-year-old student told Ginn “I can’t believe this is going on.”

Ginn told me that he couldn’t sit idly by and let an adult berate a child with profanity. He said he told Pamela Davis “ma’am, you need to sit down – I don’t know who you are, but you can’t verbally assault a student, we don’t use this kind of language in a school setting.”

The situation briefly deescalated, and district security personnel approached Pamela Davis. According to Ginn, they “coddled her” – asking what the problem was. She then allegedly pointed at the student, referring to him as a “little piece of shit.”

Ginn again protested the foul language, but was told told by security to sit down.

Ginn returned to his seat and was filling out a form to speak during the public comment portion of the meeting when he saw superintendent Davis “barreling across the room like a freight train” yelling “why are you talking to my wife?!?”

Confused, Ginn responded “I don’t even know your wife.”

School board security then restrained superintendent Davis as he barreled towards Ginn – continuing to yell “would you like to talk to me?!”

Ginn responded, “I would love to, can I make an appointment?”

Security then restrained superintendent Davis and pushed him back across the room.

Assuming the drama was over, Ginn returned to his seat to finish filling out the speaker form. At this time, Claxton approached him and informed him that he, too, was being served with a trespass notice. Ginn told Claxton this was a violation of his First Amendment rights.

When I spoke with Ginn, he was very upset because the trespass notice means he won’t be able to attend his son’s sporting events in the future.

As Ginn was being escorted out of the building he said school board member Monica E. Scott spoke up – telling RCSD deputies “if you are removing Ginn you need to remove Pamela Davis,” adding that the superintendent’s wife also “got in my face and was yelling and screaming profanity at me.”

A deputy reportedly told Scott he had to take things “one step at a time,” and that he “couldn’t do two things at once.”

Sources tell me the 14-year-old student spoke during the public comment section of the meeting. He allegedly told superintendent Davis that he had once been proud to stick up for him when others criticized him, but that what he had seen had convinced him Davis was unfit to lead the district. He asked Davis why he tells students not to fight – yet threatens others with violence.

Sounds like this student was the most responsible adult in the room, right?

Richland two’s seven-member school board has been described to me as four members who unquestioningly follow superintendent Davis – and three who resist his rule. Davis, who made $244,886 last year (not counting benefits), has allegedly taken out a gag order on school board member Lashonda McFadden, who opposes him on the school board alongside Scott and Lindsay B. Agostini.

Davis has a history of ordering district security personnel to serve parents who dare to question his leadership with trespass notices – barring them from questioning him in the future (which is documented in the Richland County incident report).

One black leader who weighed in on the incident was Stephen Gilchrist, chairman of the South Carolina African American Chamber of Commerce, a presidential appointee to the United States cilvil rights commission and a member of the black parents association in Richland school district two.

“This is not a race issue, it is an issue of leadership,” Gilchrist told me.

I concur. From my perspective, Baron and Pamela Davis acted like petulant children at this board meeting – and are certainly not fit to lead. Davis and his school board posse should know that you are supposed to read Lord of the Flies in school … not reenact it at school board meetings.

Students and parents in Richland district two deserves better than a virtue signaling clown whose own Twitter header espouses his desire to “overthrow the stereotype of the disciplinarian black male teacher” while he attempts to assault parents who voice their concerns and bars them from participating in the public discourse.

“We have to get the right people running,” Ginn told me.

He is right. Until a majority of school board members rebuke fools like Davis, this kind of intolerable behavior will continue.

If education in Richland district two – and across the Palmetto State – is ever going to improve, then parents better start paying closer attention to the kinds of people they elect to their children’s school boards. Absent that, they should consider running themselves if the only people filling these posts are self-serving imbeciles like the “leadership” currently controlling this Midlands district.

Richland School District Two disputes any statement that Superintendent Dr. Baron Davis was the aggressor or instigator in an incident that occurred prior to the school board meeting on January 25, 2022.

The two adults involved, who were escorted from the room and notified that they were being put on trespass notice, have a history of outbursts, disruptive and adversarial behavior at and following school board meetings. One individual also has a documented history of sending emails of a threatening nature to Dr. Davis.

Once Dr. Davis became aware that his wife had been harassed, and with the past inappropriate behavior of these individuals in mind, he became concerned for the safety of Mrs. Davis and others in the room. As he checked on her, he observed that she was visibly shaken. Dr. Davis then asked the second individual if he had questions to direct them to him. The individual took a step forward and responded loudly. Security personnel were nearby because of the earlier interaction, and they created a barrier between Dr. Davis and the second individual. At no time did Dr. Davis make any physical or verbal threats toward the individual. Following this, the second individual was escorted from the room and informed he would be put on trespass notice.

Unfortunately, this incident has become a distraction and overshadows the accomplishments of Richland Two teachers and students. Dr. Davis and district leaders recognize and appreciate how diligently teachers, administrators and school staff are working during these unprecedented times and ask that for the community’s continued support of the teaching and learning taking place at Richland Two schools.

Richland Two parents and community members have a right and are encouraged to be active partners, to ask questions and to express their concerns. The district facilitates numerous opportunities for input via surveys, committees, advisory groups, the district website, ombudsman, social media platforms and public participation at school board meetings. However, these conversations must be conducted respectfully and through the appropriate channels. Further, employees nor their families should be subject to emails, comments and encounters of a threatening nature when individuals disagree with a district policy or direction.

Police report filed after the incident:


Email from school board member Agostini to chairman:

‘South Carolina Man’ Sentenced In Connection With US Capitol Rioting