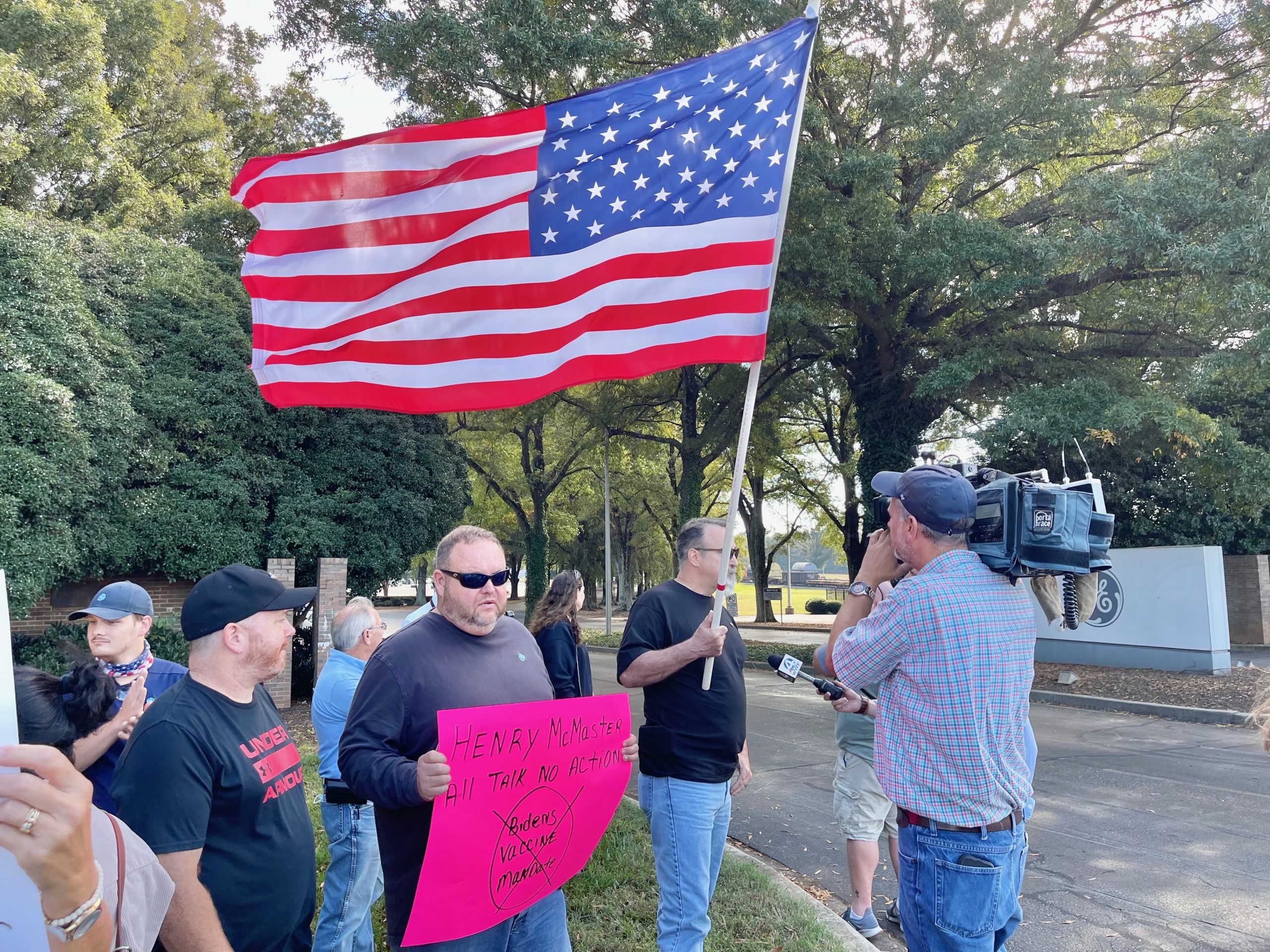 Dozens of workers employed at a General Electric turbine facility in Greenville, South Carolina walked off the job on Thursday morning in protest of a company-wide vaccination mandate – while at the same time slamming the state’s “Republican” governor, Henry McMaster, for failing to protect them from federal overreach.

The walkout is part of the escalating debate in the Palmetto State over the extent to which government (at any level) can strong-arm the private sector over its response to the coronavirus pandemic.

“The majority of the shop is against the federal government forcing anything on an individual,” one worker told WYFF TV-4 (NBC – Greenville/ Spartanburg, S.C.) in response to the mandate, which is scheduled to take effect on November 8, 2021.

The protest was endorsed by the Greenville county Republican party – which has been at war with the S.C. Republican Party (SCGOP) for months after the state party meddled (unsuccessfully) in its internal elections.

“We stand in solidarity with GE power employees,” Greenville GOP chairman Jeff Davis said in a statement. “We completely disagree with medical mandates, particular those for an injection which has caused over 798,000 adverse events nationwide.”

Davis went on to claim vaccinations had left “legions of people permanently disabled,” while causing “miscarriages, severe blood and heart issues, or even (death).”

So, to be clear: I have received both of my “jabs” – despite having had Covid-19 once (and probably twice) already. I believe vaccines to be safe and effective, and I would encourage anyone who is medically able to get them to do so. However, as I noted as recently as yesterday this personal choice must never be made compulsory – nor should we seek to punish or shame anyone who makes a choice different from our own.

“Medical decisions are unique to an individual,” Davis added. “It is not GE’s place to mandate that any person be forced to undergo a medical procedure that is risky and has caused so much harm.”

Again, I must take issue with Davis as it relates to the safety of vaccinations. I do not believe Covid-19 vaccinations are “risky.” In fact, I believe there is far greater risk in not getting vaccinated. And frankly, given what happened to one of Davis’ top allies in Greenville just two months ago, I am surprised to hear him adopt such a position.

Still, as to the ongoing debate over vaccine mandates … he and I are in complete agreement.


“Over the past few weeks, though, I have heard from far too many workers (and spouses of workers) who have been confronted with a painful choice: Get jabbed or get a new job,” I wrote just yesterday.

“Whether Covid-19 is waxing or waning – and it is currently on the wane in the Palmetto State (and nationally) – I do not believe government should trespass on individual liberty or free markets as part of its prevention strategy,” I wrote yesterday.

While GE workers were livid at their employer, they were also fed up with McMaster – who vowed just last month to fight the administration of U.S. president Joe Biden “to the gates of hell to protect the liberty and livelihood of every South Carolinian.”

When push came to shove, though, McMaster apparently could not be troubled to get involved in the GE vaccination debate …

“He said he would fight to the gates of hell but here we are a month later and he won’t get involved,” one GE worker told me.

Another worker provided this news outlet with a copy of a letter (.jpg) sent to McMaster the day before the walkout.

“I humbly request for your help and to provide an executive order for the state of South Carolina to protect those citizens who, by choice, be it religious beliefs, personal beliefs or who feel that the risks do not outweigh the benefits choose not to take vaccines at this time,” the author wrote. “I feel confident that there are many other South Carolinians, and family members of South Carolinians, who are in your voting constituency who feel similarly and are looking to you for executive aid in this situation.”

“Our governor is not consistently standing up for the workers in this regard,” he said, referring to McMaster’s refusal to take action against vaccine mandates.

McMaster’s botched rollout of Covid-19 vaccines drew criticism from both the left and the right last year, but he ultimately rehabilitated himself with GOP primary voters – and has managed to avoid “viral” negativity ever since.

GE employs more than 700 people at its 1.5 million square foot facility in Greenville, which opened in 1968 and manufactures gas turbines as well as turbines capable of being powered by wind.

“Massive yellow gantry cranes lift multi-ton rotors and stators gleaming like alien silver sunflowers,” the company boasted in a recent release. “They flip them around their axis, and stack them on shafts the diameter and length of tree trunks.”

GE has received millions of dollars in government subsidies – including huge property tax breaks – since this plant opened more than fifty years ago.