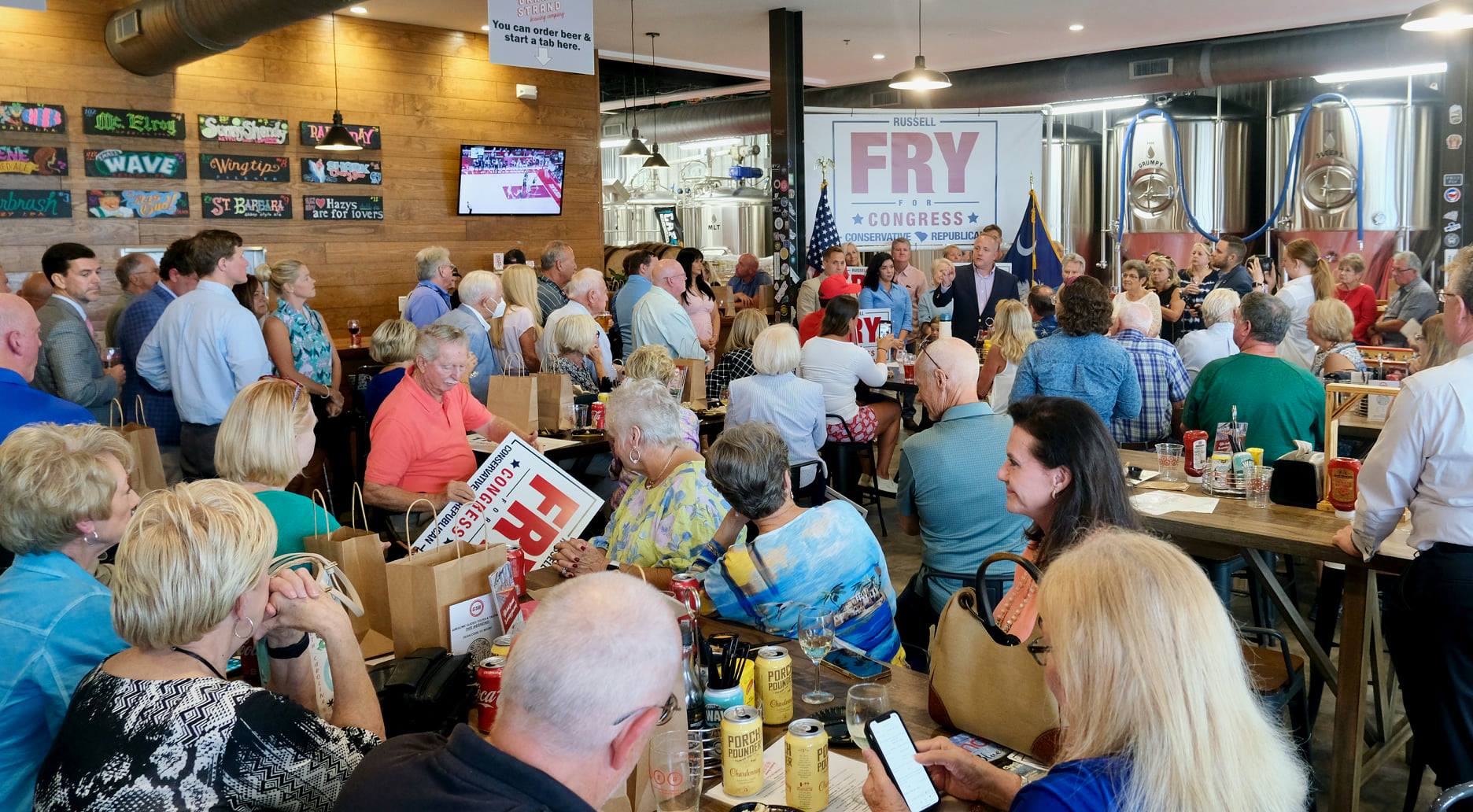 “America is worth fighting for,” Fry said at a campaign rally kicking off his bid for the Palmetto State’s seventh congressional district – a seat Rice has held since January 2013.

The 36-year-old lawmaker has represented S.C. House District 106 (.pdf) since 2015, when he won a special election to fill the seat vacated by former state representative Nelson Hardwick (who resigned in disgrace amid allegations of improper personal conduct). Fry was appointed majority whip in December 2018.

According to Fry’s spokesman J. Mark Powell, the fourth-term state lawmaker will not seek reelection to the S.C. House in 2022 – choosing to focus all of his energies on his bid for the U.S. Congress.

“I know the people and the needs of the Grand Strand and Pee Dee because I’m one of them,” Fry said, touting his district roots.

Fry also touted his loyalty to former president Donald Trump and his support for the MAGA agenda.

“It’s time we have a congressman who isn’t ashamed to stand beside president Donald Trump and the Make America Great Again agenda, someone who voted for him — and who is looking forward to voting for him again,” he said.

Another state representative – William Bailey of Little River, S.C. – formed an exploratory committee to weigh a campaign against Rice, but ultimately decided against it.

Allen has raised the most money of any of Rice’s challengers, reporting more than $500,000 in campaign contributions since announcing his candidacy earlier this year. The U.S. Army veteran – who did two tours in Iraq – has a home in Anderson, S.C. but does not have plans to move into the seventh district.

Rice defeated former S.C. lieutenant governor André Bauer in a GOP runoff election for this seat in 2012 after the two finished at the top of a nine-candidate partisan primary field that spring. Buoying his bid? An endorsement from then-governor Nikki Haley.

The 64-year-old attorney from Charleston, S.C. has not drawn serious opposition since then. In fact, Rice would have likely coasted to a fifth term in office had he not decided to join Democrats in impeaching Trump seven months ago over the latter’s alleged “incitement” of a mob that stormed the U.S. capitol on January 6, 2021.

That vote unleashed a torrent of conservative opposition … as well as a formal rebuke from his own party. Rice has doubled down on this decision. Meanwhile his wife, Wrenzie Rice, has gone even further – assailing her husband’s political opponents as being part of “the Trump cult.”

“Sometimes I wonder if this is how Hitler came to power,” Wrenzie Rice wrote in an email to one of her husband’s supporters earlier this year.

Considering Trump won the seventh congressional district with nearly 60 percent of the vote in 2020, it’s not surprising Rice’s opponents have seized on the impeachment vote as their primary weapon against him.

“Rice broke the trust of the people who elected him,” Fry said of that decisive vote.

Nor, for that matter, is it surprising to hear Rice and his allies boast of how he voted with the former president “more than 94 percent of the time” during the latter’s tenure in Washington, D.C.

As I have said all along, I am not going to judge Rice for his impeachment vote. I did not support Trump’s actions leading up to the riots, but I also did not believe the former president’s actions warranted impeachment. In fact, in the aftermath of the capitol riots I made certain this news outlet – unlike the mainstream press – took pains to defend free speech and rebuke censorship.

Still, I have also acknowledged that Rice and other lawmakers “were put in a pretty scary position by the Trump supporters who stormed the capitol.” Accordingly, I have declined to judge them for voting their consciences on that issue.

Will seventh district GOP primary voters extend Rice the same benefit of the doubt? I highly doubt it …

As I have often stated, my issue with Rice has always been his fiscal liberalism. During the most recent congressional cycle, for example, Rice ranked dead last among the Palmetto State’s GOP delegation when it came to his “pro-growth, limited government” votes – earning a 79 percent score from the national Club for Growth.