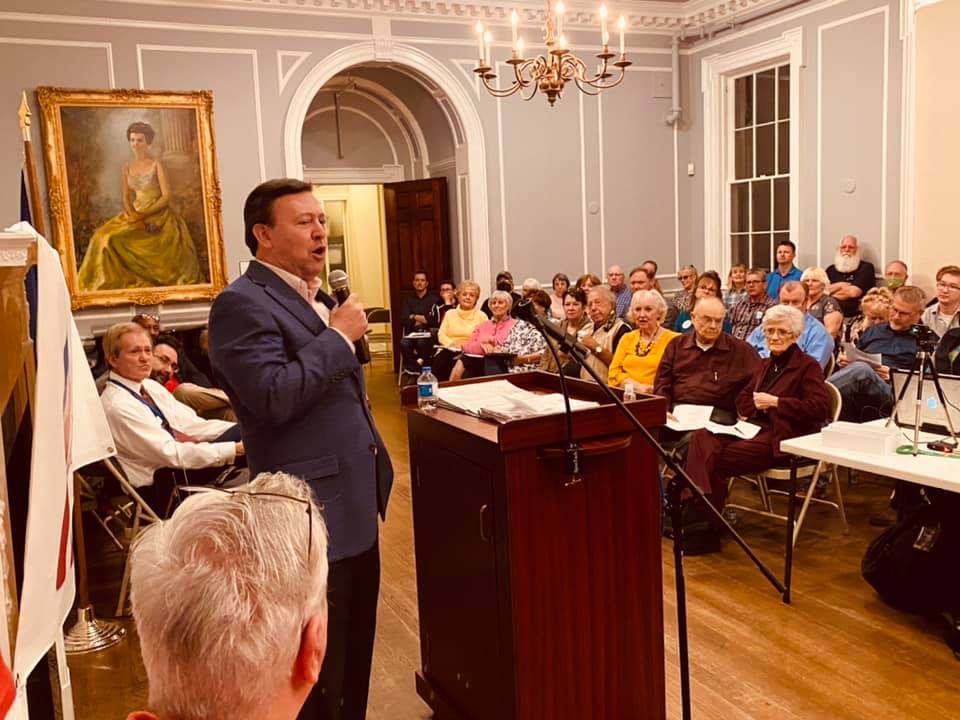 The civil war within the South Carolina Republican party (SCGOP) – and the accompanying battle for the mantle of conservatism in this critical early-voting primary state – escalated dramatically this week. Meanwhile, the outlook for future factionalism intensified following some ill-advised comments from the chairman of the badly divided state party, Drew McKissick.

McKissick’s comments were not only irresponsible … they exposed what I believe to be a fundamental hypocrisy when it comes to this ongoing intra-party infighting.

First, though, the background: As I reported yesterday evening, the top three elected leaders of the Greenville county Republican party jointly resigned their offices on Thursday afternoon – citing their inability to work with the grassroots conservative activists currently dominating the direction of the organization.

As I noted in my coverage, the resignations of party chair Jennifer Black, vice chair Stacy Shea and state executive committeeman Randy Page constituted a “major coup” for the so-called “MAGA” wing of the party – a growing assemblage of right-wing activists who feel more centrist (or “establishment”) Republicans are traitors to the true conservative cause.

These activists – many of whom are affiliated with the grassroots group mySCGOP.com – came up short in their effort to oust McKissick as party chairman two months ago, but they have exerted outsized influence within several county party organizations.

One of those parties is the Greenville county GOP – an organization which has been in turmoil following the outcome of its disputed April 2021 election. That vote was a split decision – with the so-called “establishment” capturing all three party leadership positions but the “MAGA” movement securing an overwhelming majority of rank-and-file delegates.

Or at least that is what I thought happened …

Earlier this week, my website published an article on a questionable “ballot harvesting” operation that helped Black, Shea and Page defeat their right-wing rivals three months ago. This operation was referenced in a recent report prepared by a special Greenville GOP committee – a committee whose members were appointed by Black.

While many expected the special committee would exonerate Black and her allies, it did not.

According to the report (.pdf), unknown donors to the SCGOP subsidized a controversial delegate recruitment effort in the days leading up to the county convention in April – a shadow campaign which enabled Black, Shea and Page to triumph in what critics contend was a “rigged” vote.

The report concluded that multiple “agents of the party” were responsible for this recruitment effort – including one SCGOP field operative and multiple state lawmakers, according to sources familiar with the operation.

Considering the state party was essentially caught redhanded meddling in a local party election, I expected SCGOP chairman McKissick to be a bit defensive in his comments following Black, Shea and Page’s resignations on Thursday evening.

But McKissick went completely off the deep end … unloading in a most undisciplined and unwise manner on the conservative activists who ran his hand-picked slate of candidates out of office.

According to reporter Jamie Lovegrove of The (Charleston, S.C.) Post and Courier, McKissick predicted the new leadership of the Greenville party – which has yet to be selected, incidentally – would turn the organization into “a complete dumpster fire.”


“(It will) essentially be a leper colony for the next year-and-a-half,” McKissick told Lovegrove.

Wait … did McKissick just refer to the MAGA movement in South Carolina as a bunch of lepers?

In pouring more gasoline on this conflagration, McKissick added that the state party was prepared to support rival GOP organizations in Greenville county created by “sane Republicans.”

“We will help them do that in every way,” he told Lovegrove.

Sound familiar? Regular readers of this news outlet will recall McKissick was involved in unprecedented state party meddling against fiscally conservative candidates during the 2020 GOP primary election cycle. He even backed one fiscally liberal GOP candidate against an incumbent in a contested primary election.

This leads me to what I believe is the most important point of this column … the pervasive double standard that exists within the “Republican” party in the Palmetto State in the aftermath of contentious partisan primary elections.

Whenever left-of-center GOP candidates are victorious in an intra-party squabble, conservatives are expected to (and usually do) fall in line.

Whenever the right-of-center team wins, establishment “Republicans” take their marbles and go home.

Or in McKissick’s case, they issue threats …

One of the leaders of the “MAGA” insurrection in Greenville – local tea party chairman Pressley Stutts – joined other right-wing activists last fall in endorsing left-leaning “Republican” U.S. senator Lindsey Graham. As I noted in my coverage of these endorsements, Stutts and his allies backed Graham at “a pivotal moment” in his reelection bid. In other words, they were “team players.”

Now that Stutts and his tea partiers have prevailed in an intra-party spat, though, they are “lepers.”

To be clear: I am no “Republican.” I am an independent, free-thinking libertarian who supports individual freedom and free markets – a voter who had candidates from four different parties on his 2020 ballot. So, what ultimately happens to the “Republican” party – at the local, state or national level – is of utterly no consequence to me.

The GOP can self-immolate for all I care … especially seeing as its legislative “super-majorities” (and its total executive branch supremacy) in South Carolina have proven roughly as effective as tits on a bull when it comes to achieving positive outcomes on behalf of citizens and taxpayers.

While I have no dog in the SCGOP fight, I do believe McKissick’s temper tantrum (and “leper” quote) was an incredibly irrational and short-sighted approach to resolving this particular conflict … one that is going to come back and bite him in the ass repeatedly in the weeks and months to come.

Bigger picture? His response is the latest example of a deep-seated hypocrisy within the GOP establishment which demands (and usually receives) allegiance from the right whenever its equivocating quislings succeed – but refuses to return the favor when they go down in defeat.

Of course “do as I say not as I do” is the GOP default setting on all manner of issues, isn’t it?