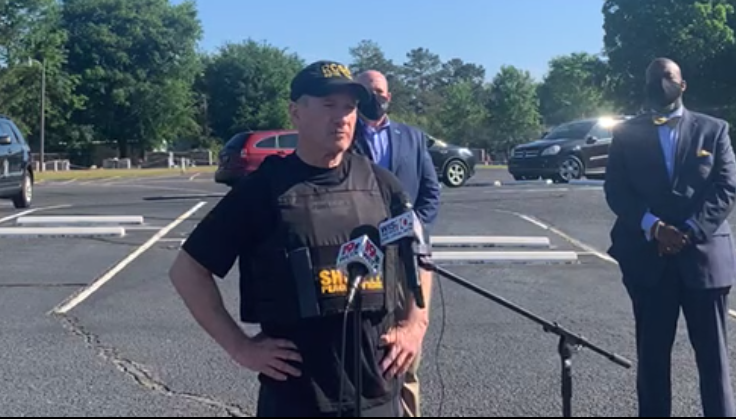 Jovan Collazo, a 23-year-old soldier-in-training from New Jersey, was arrested following the incident, according to officials. He was charged with 19 counts of kidnapping, along with other charges.

Collazo was known as a quiet trainee who didn’t show any problems in the three weeks he was training at Fort Jackson, Commanding General Brig. Gen. Milford H. Beagle Jr. said Thursday.

The terrifying incident started around 7 a.m. in Fort Jackson when Collazo, armed with a rifle, escaped post by jumping a fence, according to Richland County Sheriff Leon Lott.

Beagle said that Army officials believe that Collazo didn’t intend on harming anyone but “just wanted to go home. He took a rifle that didn’t have any bullets in it.

Military officials believe Collazo brought his rifle with him as a way to buy more time before Army officers noticed he was missing as he was escaping from Fort Jackson.

Collazo, wearing Army fatigues, ran toward I-77 to flag cars down for a ride.

At some point, the trainee forced his way onto Richland Two school bus that was transporting Forest Lake Elementary students at the bus stop on Eagle Park Road and Percival Road in Columbia.

Collazo armed with a gun, told the bus driver he didn’t want to hurt anyone and needed him to drive to the next town, according to Lott.


Collazo brought the 18 children to the front of the bus, but “got a little frustrated” after the kids started asking him a lot of questions, Lott said.

The kids were held hostage for six terrifying minutes.

He then pulled over in a church parking lot and let the children and bus driver off the bus, according to Lott.

Click the video below to view a clip of security footage from the bus..

Multiple people spotted Collazo at Percival Road and I-77, where he was arrested by Richland County deputies.

Lott said that the bus driver deserved credit for keeping the children safe. Lott called him a hero.

“He didn’t overreact,” Lott said. “He kept his cool enough that kept the situation calm.”

Richland Two officials said Thursday they will offer counseling to the Forest Lake students for as long as they need it.

Fort Jackson‘s top official accepted responsibility for the incident Thursday and said the Army will be looking at ways to prevent problems in the future.

“This is something that was a failure with regard to me and in terms of our accountability, procedures and processes,” Beagle said. “So, for me this was a key failure in our accountability processes that I will fix going forward because the outcome potentially could have been much worse.”