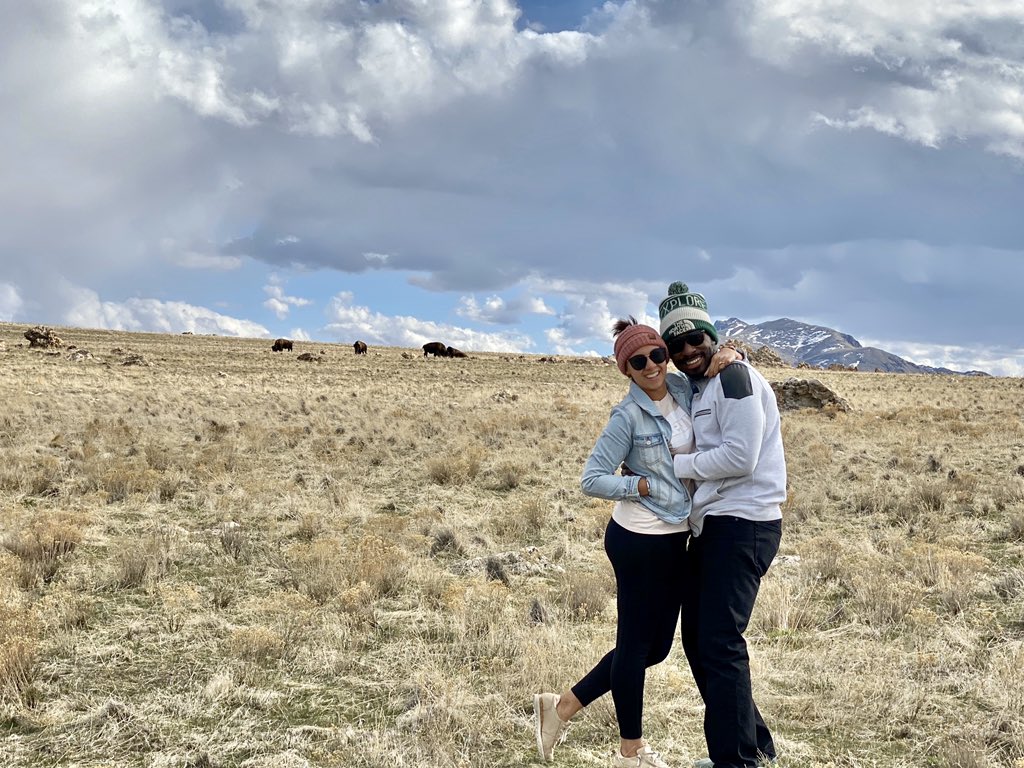 Former University of South Carolina football star Marcus Lattimore and his wife, Miranda Lattimore, say they were falsely accused of trafficking drugs after being pulled over by officers of the Nebraska State Patrol near the town of Kimball, Nebraska earlier this week. The incident – which is under investigation – took place on Wednesday morning as the couple were returning to their Columbia, S.C. home from a trip to Las Vegas, Nevada.

On Tuesday, Miranda Lattimore tweeted that she and her husband had “previously planned a cross-country trip and decided to still go through with it as it would be safer driving in rural areas of the country than flying into an international airport.”

During the controversial traffic stop in the American heartland, the Lattimores say officers subjected them to an “unspeakable” display of racial profiling – while falsely accusing them of trafficking cocaine and heroin across the country.

“I’ve been racially profiled before, but the events that just went down in Kimball, Nebraska were unspeakable,” Miranda Lattimore tweeted. “I can’t even begin to describe the numbness I felt when an officer asked my husband and myself to step out of our vehicle because I was ‘shaking.’”

At one point during the incident, an officer allegedly told Lattimore to “claim your drugs.”

How did all of this start?

“We were pulled over for going 80 (miles per hour) in a 75 (miles per hour) zone,” Miranda Lattimore tweeted. “Yes, we were speeding. But that does not warrant being taken out of our car, patted down, separated and put into two different vehicles, interrogated, accused of trafficking drugs and then we had to wait on a K-9 unit to come inspect our vehicle. An hour later, we weren’t even given a speeding ticket. Five police officers and a K-9 unit all for going five miles over the limit.”

Marcus Lattimore tweeted that at age fifteen he had been subjected to a racially motivated “stop and frisk” detainment. Five years later, he said he was “accused of stealing” from a local Dollar General store.

“Accused of trafficking 30 pounds of cocaine and heroin,” the 28-year-old Duncan, S.C. native said in his tweet.

Marcus Lattimore told officers there were neither drugs nor weapons in his vehicle, but a search was conducted by NSP officers regardless – ostensibly because his wife was observed “shaking.”

NSP acknowledged the incident – and the ensuing investigation.

“We are aware of the allegations involving a traffic stop that occurred this morning near Kimball,” the agency noted in a tweet. “NSP takes complaints seriously and has a thorough process to diligently review each case. NSP is in contact with the motorists involved and the review process is already underway.”

“We are still shaken up but we are moving on,” Miranda Lattimore tweeted. “We’ve filed a formal complaint with (the Patrol) and they have taken this very seriously. Thank you all for your concern and also, please note this is just Twitter. The whole story isn’t here and so many other stories aren’t shared.”

Marcus Lattimore played three seasons at South Carolina from 2010-2012 – amassing 2,677 rushing yards and a school-record 38 touchdowns. He also had 767 receiving yards and three touchdowns prior to suffering a career-ending injury to his right knee during a game against the Tennessee Volunteers on October 27, 2012.

One of the most beloved Gamecock players of all-time, Lattimore was drafted in the third round of the 2013 NFL draft by the San Francisco 49ers but never played professional football due to lingering complications from his knee injury. He spent the past two years as South Carolina’s director of player development under head coach Will Muschamp – resigning in January to “to devote more time to personal and professional opportunities,” according to a news release from the Gamecock program.

News of the traffic stop prompted outrage on social media.

“I’m sorry for you and your wife,” Kenny Brown tweeted. “It’s disgusting to think this still happens in 2020. I am hoping for justice.”

Others offered encouragement to the Lattimores.

“Marcus you have always been an amazing role model for my children,” Jena Walldorf tweeted. “I am so sorry that happened to you.”

We will keep our readers updated on the status of the Nebraska investigation, including the release of any bodycam or dashcam evidence related to this controversial traffic stop.