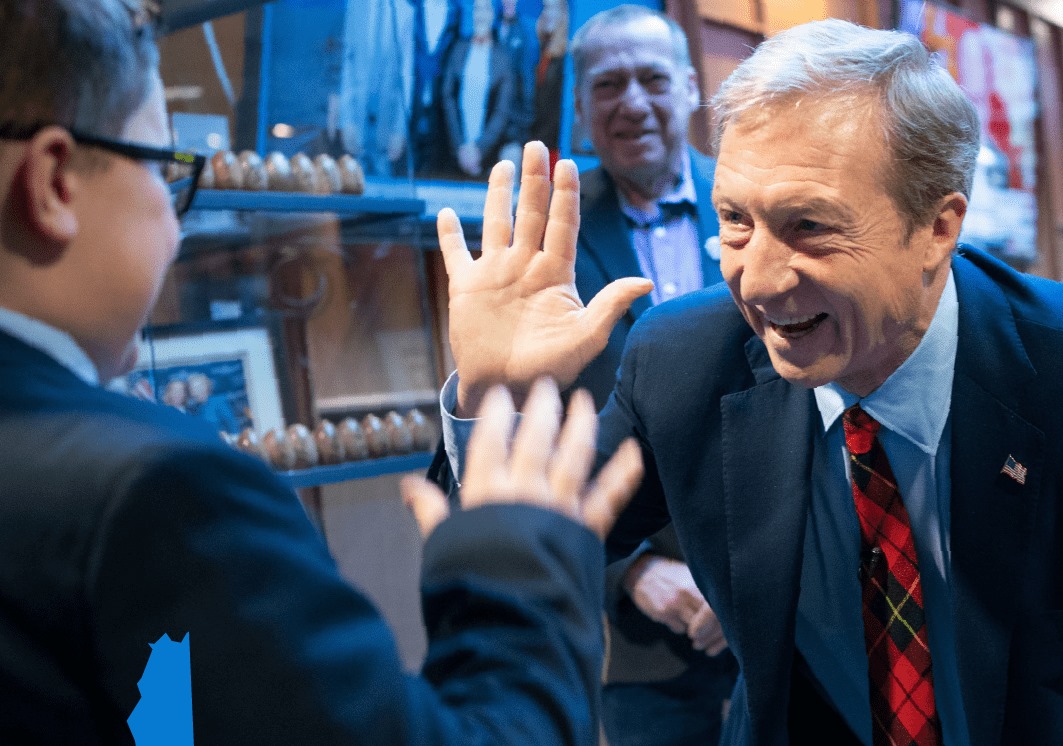 This news outlet does not have a favorite in the 2020 “First in the South” Democratic presidential primary tomorrow. We have made it clear, however, that we do not like liberal billionaire Tom Steyer – who has made it his mission to shamelessly purchase as much black support as he possibly can in South Carolina in an effort to maintain relevance in a crowded national race.

Something about that rubs us the wrong way …

“How brazen is Steyer’s attempted buying of the black vote in South Carolina?” we wrote earlier this month. “Not since fictitious sports agent Jerry Maguire screamed ‘I am Mr. Black People!’ has anyone been less subtle in their pandering.”

In addition to his nauseatingly transparent, overtly opportunistic “outreach” efforts with black voters, Steyer is also hinging his campaign on the notion of environmental justice for all Americans.

“Save the world. Do it together.”

But are Steyer and his South Carolina supporters really serious about saving the world? Or is that just more hypocritical pandering for votes?

And is their failure to live up to that credo about to have potentially pernicious consequences on some of South Carolina’s poorest black citizens?

We were very curious to see an exclusive story in this morning’s editions of The (Columbia, S.C.) State newspaper from Sammy Fretwell regarding the planned relocation of a chemical manufacturing operation from Mexico to Orangeburg county, S.C. – home of Gulbrandsen Chemicals Inc.

Specifically, Fretwell reported that Gulbrandsen plans to begin manufacturing pentachlorophenol – “a potentially caner causing material” and “highly toxic chemical banned by up to 168 countries” – in Orangeburg county after authorities in Mexico shut down a production facility to comply with a global ban.

Pentachlorophenol (or “penta”) is used as a coating on wooden utility poles and fences. According to the U.S. Centers for Disease Control and Prevention (CDC), it is “a synthetic substance, made from other chemicals, and does not occur naturally in the environment.”

It has been classified by the U.S. Environmental Protection Agency (EPA) “probable human carcinogen.”

Applying poles with “penta” reduces degradation and extends their durability from five years to anywhere between 25 and 50 years, industry sources told Fretwell. However, his story didn’t do a deep dive into a host of cleaner, better (and safer) alternatives to the substance – many of which can similarly extend the durability of wood without the potentially harmful side effects.

“Penta is the worst, which is why it is banned in nearly 170 countries,” one source familiar with the situation told our news outlet. “It has a dramatically elevated cancer risk.”

Fretwell’s story – which was published less than 24 hours before polls open in early-voting South Carolina – also failed to draw an obvious connection between this company and its intended location, which just so happens to be the back yard of three Steyer supporters (including two of his most prominent black backers in the Palmetto State.

We are referring to state representatives Gilda Cobb-Hunter, Jerry Govan and Russell Ott – all of whom represent parts of Orangeburg county yet none of whom have spoken out against the Gulbrandsen facility’s plans to manufacture “penta” there.

Seriously … not so much as a whiff of “not in my backyard” indignation.

So let’s make sure we have the facts straight here: Three elected officials who are supporting the most radical pro-environmental presidential candidate America has ever seen are not uttering so much as a syllable in opposition to the location of a potentially dangerous chemical plant in their own backyard?

That is some rich hypocrisy …

Obviously, the national narrative here is easy to write … we just wrote it.

But Steyer will be leaving South Carolina as soon as the votes are counted tomorrow night. He can soar off on his private jet to the next assemblage of impressionable progressive suckers.

Cobb-Hunter? Govan? Ott? Their nightmare on this is just beginning …

Orangeburg county is two-thirds black. One-fifth of its population resides below the poverty line. In other words, these are the exact people Steyer and his supporters say they want to help …

So why aren’t they helping them?

Seriously: Where is the “environmental justice” for Orangeburg county?

Stay tuned … we are just beginning to dig into this story.

SC Inmate Who Was Raped In The Shower At Psychiatric Hospital Sues SCDC, Lawsuit Says

2020 ‘First In The South’ Democratic Presidential Primary: The Oracle Speaks