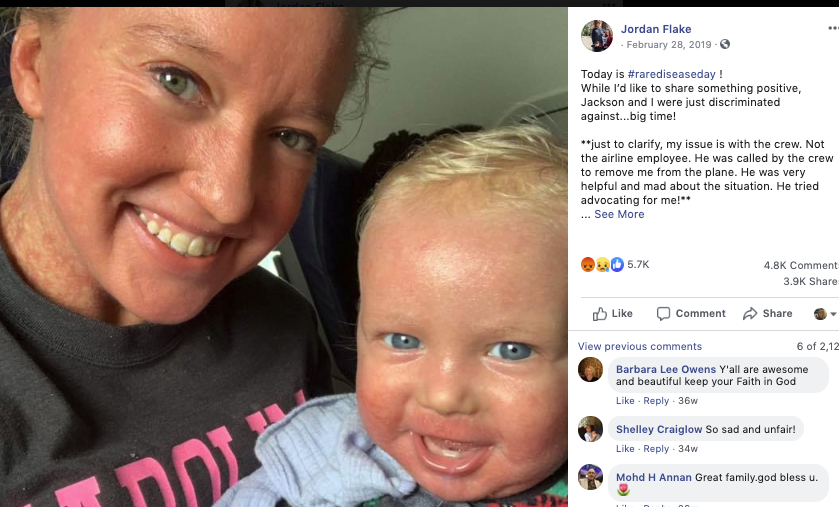 Nearly a year after she was kicked off a flight with her then 1-year-old baby because of their rare skin disease, a Lexington County, South Carolina mother is suing American Airlines.

On Feb. 28, 2019, Flake was scheduled to fly with her son back hom from El Paso, Texas, where they were visiting Flake’s husband, a U.S. Army sergeant who was about to be deployed to Iraq, the lawsuit said.

Both Flake and her son Jackson suffer from ichthyosis, which is a genetic, non-contagious skin condition “characterized by dry, scaling skin that may be thickened or very thin,” according to the First Skin Foundation.

After the mother and son got settled in their seats, an American Airlines employee —who was called in by the flight crew — approached Flake and asked her “about her rash” and asked if she had a letter from a doctor giving her the OK to fly.

“I explained to him that it was called Ichthyosis and it was a genetic skin condition,” Flake wrote on Facebook in a viral post that day, which happened to be Rare Disease Day.

After telling the employee she didn’t need medical clearance to fly, the man did a quick internet search and then approached the flight crew to discuss the mother and child’s condition, according the lawsuit.

The American Airlines employee returned and told Flake that they had to get off the plane immediately.

Flake and her son were then escorted off the plane in front of all the passengers, according to the lawsuit. They couldn’t get their luggage and had to stay in Texas another night before they were eventually able to fly back to South Carolina the next day on a different airline.

“I have never been so humiliated in my life!” Flake wrote on the viral Facebook post. “Happy Rare Disease Day! Quit being ignorant and take the time to listen to people! I shouldn’t have to explain myself.”

Flake has suffered from ichthyosis since childhood, the lawsuit said. She said she “had never been so humiliated and embarrassed in her life as when she and her son were identified by American Airlines employees as having a medical condition or disease that made them unfit to associate with and travel with other passengers, and calling that condition to the attention of other passengers.”

“I should never feel ashamed of myself for the way I was born,” she wrote in a blog post on Love What Matters. “This was unacceptable and uncalled for. I have never been asked to show a letter. I have never been told by a doctor that I had to have documentation stating I wasn’t contagious, or whatever they were assuming. In 2019, it’s time we stop discriminating. Ask questions, and listen.”

In the blog post written before the lawsuit, Flake said her issue was with the airline crew, not the individual who was told by the crew to remove them from the plane.

“If anything comes out of this, I hope it’s that whatever individual put this into action realizes they were wrong and unkind, and will think twice next time,” Flake wrote.

Days after the post went viral last year, American Airlines issued a statement of apology, according to Fox Carolina.

“Our goal at American Airlines is to create a welcoming environment for all of our customers.  We sincerely apologize to Ms. Flake and her son for the experience they had yesterday, and our team has begun an investigation into the matter.  Our Customer Relations team has already spoken to her directly and upgraded them on their flights.”

Columbia attorney Thomas Barlow is representing Flake in the case.