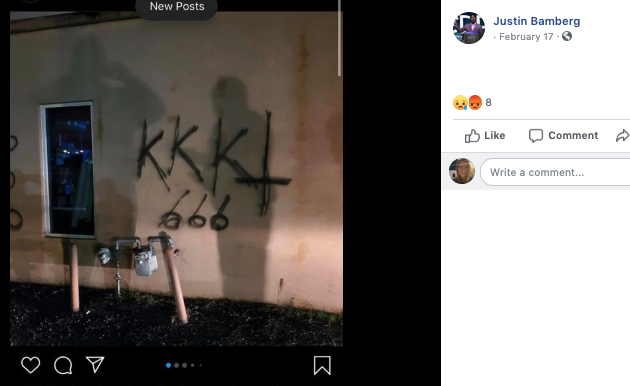 An Orangeburg, South Carolina hookah lounge was spray-painted with racist symbols Sunday evening and police are calling it a hate crime, the Times and Democrat first reported.

State representative Justin Bamberg (of Bamberg, S.C.) tweeted photos of the business vandalized with “KKK,” 666” and an inverted cross markings on the Cloud 9 Hookah Lounge and Bistro. Though hateful, the symbols are somewhat contradictory. The KKK calls itself a Christian organization and the two other signs symbolize the antichrist.

“Absolutely disgusting and purely ignorant that these men have to deal with this,” Bamberg said, adding that one of the owners is a 24-year retired veteran.

Two black brothers own the business located on Russel Street in Orangeburg.

According to the Times and Democrat, an Orangeburg Department of Public Safety officer discovered the vandalized business with spray paint on every side of the building Sunday evening.

Hundreds of people have shared their strong reactions T&D story on social media.

“Racism is very real,” one person wrote on the post.

“Is the Hate ever going to stop?” Another person commented.

“The struggle continues,” one commenter said.

Orangeburg Department of Public Safety officials are investigating it as a hate crime until proven otherwise, the Times and Democrat reported.

However, South Carolina is one of four states without a hate crime law. Lawmakers hoping to change that are pushing a bill this year proposing a hate crime statute.

The Tribune News Service reported that hate crimes in the Palmetto State increased by 70 percent from 2013 to 2017.

While hate crimes can be reported by different law enforcement agencies across SC, only the FBI can pursue hate crime charges in South Carolina, the Tribune News Service reported last year.

“There are so many situations that we can call upon where hate has plagued our state. Not the country but our state,” Perry Bradley of Building Better Communities, a group advocating for the bill, previously told Buzzfeed news. “So what we’re looking to do now […] is to bridge that gap of unity between the African American community and the Jewish community to fight something that is so prevalent today.”