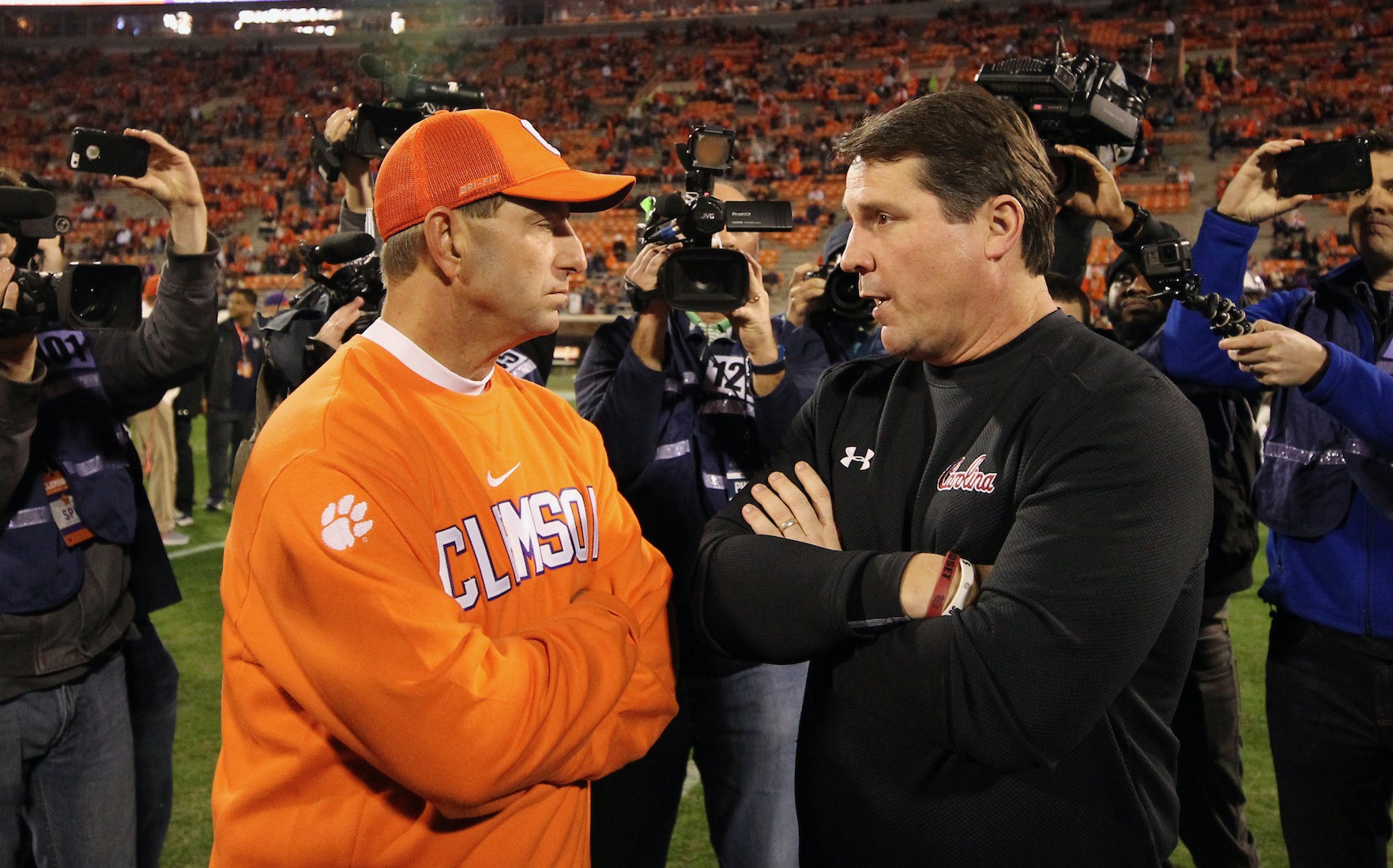 The phrase ‘throwing shade’ has become part of the prevailing lexicon, so we suppose we might as well embrace it. But there is a difference between “solid shade” (i.e. well-wagered trash talk) and “silly shade,” which is what embattled University of South Carolina head football coach Will Muschamp served up this week.

Not long ago, Muschamp was whining about “negative recruiting” against his program by other schools – specifically Georgia and Clemson.

“We faced a lot of negativity outside our campus … some on our campus,” Muschamp said in December after announcing his program’s early signees for 2020. “When you don’t have the year you want to have, you deal with a lot on the recruiting trail. About 90 percent of it is not true from some of our lovely competitors.”

Our friendly advice to Muschamp (who has shown himself to be quite thin-skinned when it comes to criticism)?

If you don’t want other programs to “negatively recruit” you … don’t go 4-8.

Credit where credit is due, though: Muschamp staved off a recruiting disaster this year, punctuated by this week’s formal signing of five-star Columbia, S.C. prospect Jordan Burch. The 6-foot-6, 255-pound defensive end is the No. 8 player in the nation, according to 24/7Sports – and his decision to stay home and play for the Gamecocks was a huge win for Muschamp and his recently reshuffled staff.

Burch is by far the best player Muschamp has recruited during his four years as Gamecock head coach, and he is expected to make an immediate impact in 2020.

In celebrating Burch’s announcement, however, Muschamp (above) – who only kept his job last year because South Carolina couldn’t afford to fire him – seized the opportunity to make a buffoon out of himself.

“It’s a great way to close out our 2020 signing class with Jordan Burch deciding to stay home and play for the University of South Carolina,” Muschamp said in a statement released by the school’s athletics department. “He is a wonderful person and I’m excited that he will be part of the Gamecock family. We really appreciate his mother, Henri, trusting us and sending her son to the in-state school. Jordan is an explosive athlete, extremely smart and versatile player who can do a lot of things on the football field and I can’t wait to coach him.”

The in-state school? Did Muschamp seriously just say that?

Yes, he did. In fact, his official statement (as provided to members of the media) emphasized the word “the.”

Does Muschamp have a case to make in support of such a statement? Duh. No. In fact, we can barely even refer to it as “aspirational” in light of the widening chasm between South Carolina and Clemson.

South Carolina did manage to rattle off five straight wins over the Tigers from 2009-2013 under former head coach Steve Spurrier, but Clemson proceeded to reel off six in a row (and counting) to answer the Gamecocks’ streak.

We wonder: Was Muschamp referring to academics?

No, because the data is just as bad there for “the” in-state school. According to the latest U.S. News and World Report national college rankings, Clemson is tied for No. 70 on this list while South Carolina is tied for No. 104. Meanwhile on StateUniversity.com, which ranks colleges in large part on the basis of incoming students’ SAT or ACT scores, Clemson currently clocks in at No. 139 while South Carolina ranked No. 198.

So no … South Carolina is not “the” in-state school on that front, either.

Again, we are pleasantly surprised by Muschamp’s ability to successfully recruit talented athletes following the dumpster fire that was the 2019 season. However, while the Gamecocks are currently in possession of the nation’s No. 17 (Rivals) or No. 18 (24/7Sports) recruiting class for 2020 – it is worth considering how its opponents for the upcoming season fared.

Meanwhile SEC East foe Florida ranked No. 8 on both lists, while another SEC East foe Tennessee ranked No. 7/10 – buoyed by a season-saving come-from-behind win over the Gamecocks in late October.

In other words, South Carolina’s recruiting class isn’t even in the top half of its own division.

Don’t mistake us: We certainly hope Muschamp takes advantage of his (latest) opportunity to turn things around in Columbia. He certainly has the talent to do so, and it would make for an amazing story were he able to make good on his promise to take the Gamecock program “where it hasn’t been before.”

But comments like these directed toward Clemson’s program are laughable. And make Muschamp (and his program) appear petty.

Ideally, college football coaches wouldn’t feel the need to talk trash about their rivals. Or if they did, our hope is they would at least be creative about (like Spurrier). This? This is “silly shade.”

Baseball Legend Darryl Strawberry Coming To The Midlands Next Week