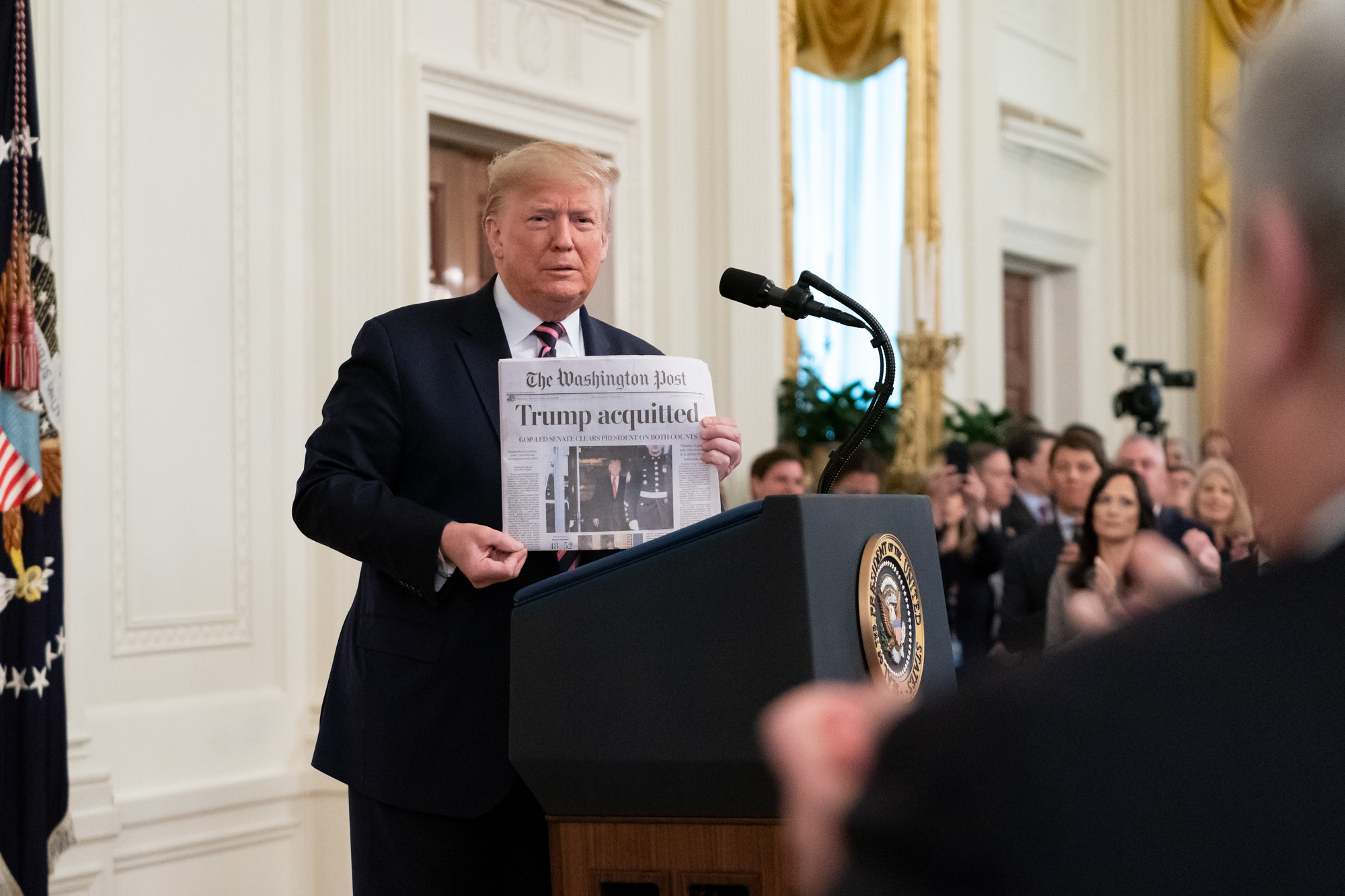 by ROBERT ROMANO || President Donald Trump has been locked in an unprecedented struggle with intelligence agencies and a rogue Justice Department that sought to destroy him, his campaign and eventually his presidency, since before he was elected – an effort not only to disenfranchise and demoralize the 63 million Americans who voted for him in 2016.

In many ways it was the greatest attempt at voter suppression in American history. It began as a campaign talking point. Republicans are committed Cold Warriors, and in 2016, Donald Trump said he thought the U.S. and Russia could get along better, and so, his political opponents and the national security apparatus in Washington, D.C. sought to portray him as being “cozy” with Russian President Vladimir Putin. This would theoretically drive a wedge between Trump and his supporters, and cause Republicans to back a more establishment candidate.

Trump came across as a statesman in foreign policy who might be able to broker new agreements that could help to keep America safe and out of war.

In the general election, the narrative was weaponized by the Hillary Clinton campaign and the Democratic National Committee, who in 2016 hired via law firm Perkins Coie, the opposition research firm Fusion GPS, who hired former British spy Christopher Steele, to concoct allegations against Trump and his campaign, that they were Russian agents and that they had conspired with Russia to hack the Democratic National Committee and put the emails on Wikileaks. None of the allegations were made public at the time even as they circulated power circles in Washington, D.C.

Taking on a life of their own, the allegations were then passed on to the FBI and the Justice Department, who initiated top secret surveillance of the Trump campaign beginning in Oct. 2016 and not ending until after Special Counsel Robert Mueller was appointed in May 2017.

Still, the “cozy” with Putin meme would be played again and again on the campaign trail by Clinton publicly. But it backfired. Trump successfully painted Clinton as a warmonger who might get us into World War III.

Turns out that was not too far off the mark. The false allegations against Trump being a Russian agent have nearly incapacitated the ability of not only President Trump, but future presidents as well, to deal effectively and flexibly with Russia, especially when a deal might keep us out of Armageddon. Summits, once a highly effective foreign policy tool for American presidents, are now subject to over-the-top allegations of treason.

And it was all completely avoidable, we now know from Justice Department Inspector General Michael Horowitz. After Trump won the election, in Jan. 2017 before the President was sworn into office, the FBI finally got around to interviewing one of the primary sources used in the Steele dossier, who ended up contradicting Steele and creating a void of evidence for the most serious charges leveled by Steele. Their key witness had folded and so they had a choice to make to end the investigation right then and there and hope nobody found out, or to proceed into the breach and carry on a rogue investigation of Trump into the new administration they knew was seriously flawed.

We all know what happened. They carried on the investigation and hid the exculpatory evidence not only from the President but the entire country. They sat on it. They wrongly targeted Michael Flynn, Jeff Sessions and others. Former FBI Director James Comey lied to the President’s face about the extent of the investigation and thank goodness President Trump fired him for it, or else we might not have ever found out what really happened.

Really, if it was not for the fortitude of one man, President Trump, to stand up for the Constitution, his office and the American people, and grave, irreparable damage might have been inflicted on the republic – a dark alternate reality where the national security apparatus selects the President and political opponents are destroyed with malicious fantasies fabricated by secret political ops.

Instead, it all backfired. Comey was fired and although it led to Special Counsel Robert Mueller’s appointment, it also led to Mueller finding there was no conspiracy between the Trump campaign and Russia. Mueller punted obstruction of justice to Attorney General William Barr and then-Deputy Attorney General Rod Rosenstein who found no crime.

The impeachment that followed – over the President’s freezing of military assistance to Ukraine while he considered both the national security implications and corruption in Ukraine – was a dagger at the heart of not just this President, but every president to keep us out of World War III.

A brief history lesson: In 2014, the Obama administration including Vice President Joe Biden pushed then-Ukrainian President Viktor Yanukovych out of power because Yanukovych opposed a trade deal with the European Union. The government was overthrown and the trade deal was adopted, but not before it led directly to the secession of Crimea and eastern provinces in Ukraine, which were taken over by pro-Russian forces. Suddenly there was a civil war.

When Trump (above) ran for office, Steele or his sources concocted the allegation that the Republican Party Platform had been altered at Vladimir Putin’s behest to soften language on arms to Ukraine. So thoroughly convinced that Trump was a potential Russian agent, once elected, Congress forced U.S. arms to Ukraine – an amendment by the late Sen. John McCain who was fed the dossier by Steele via a surrogate – into the budget and made it a litmus test. If Trump questioned the arms or paused the assistance to Ukraine, even if it was meant to prevent an unintentional, catastrophic war, it proved he was a Russian agent.

But the only reason for the aid to Ukraine was to counter Putin’s master plan of the Manchurian Candidate Trump as a Russian agent. It was a countermeasure for a fictitious big lie.

In our right minds, we probably would have never sent military assistance to Ukraine but for the Steele dossier lies. The Obama administration never did.

And it is unclear how “vital” – quoting the now-failed articles of impeachment – the aid even is to Ukraine, when the Javelin missiles have not been used once on the eastern front of the Ukraine civil war. Instead, the anti-tank missiles are sitting in a warehouse in western Ukraine, far away from any fighting, as revealed by Foreign Policy Magazine’s Amy MacKinnon and Lara Seligman in October.

That’s what we are turning the country inside out over: Unused missiles in a civil war we never would have gotten involved with but for a conspiracy theory originally cooked up as a campaign talking point for Hillary Clinton.

No other president could have withstood this assault on our constitutional form of government and the basic ability to conduct foreign relations. President Trump is standing up for the Constitution, his office and the American people to secure liberty for everyone and to keep us out of war.

But the damage has been palpable. For years to come, this will create a real obstacle for this President and future presidents to deal with Russia diplomatically. Future presidents might cower from Russia hawks in future administrations who might use similar blackmail to strong arm policy, leading us potentially into a unnecessary conflict.

Under similar circumstances, with such allegations of treason pervasive against an administration, incidents like the Cuban Missile Crisis might not be able to be resolved peacefully, making this madness, this national or at least partisan hysteria about Russia a bona fide threat to national security. In the nuclear age, presidents must have the ability to deal diplomatically with other nuclear powers.

Believe it or not, President Trump might be the only person who can fix this. That is why he deserves the support of every American, regardless of party and who they end up voting for this year, that his administration and Attorney General William Barr get to the bottom of this failed deep state coup and what really happened, and if possible to repair relations overseas even with our adversaries – so that this never happens to any president ever again. There is simply too much at stake.