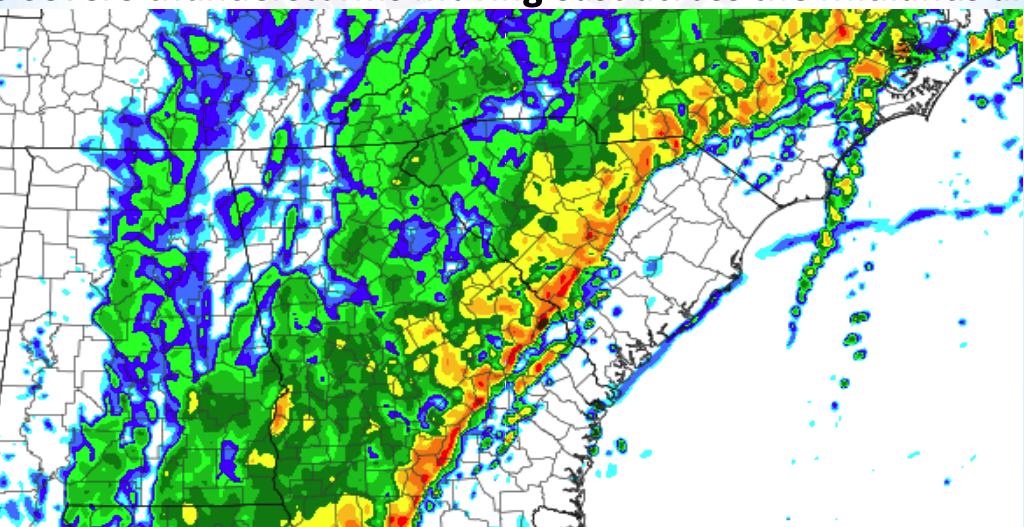 Severe storms with “the juice to produce 60-70 mph wind gusts, lightning, and tornadoes” are expected to move across the Midlands today, according to South Carolina climatologist Mike Malsick.

A “slow-moving cold front” is set to produce a strengthening line of storm cells over the Midlands this afternoon, Malsick said in his Thursday morning South Carolina Department of Natural Resources weather briefing.

Schools across the Upstate, Midlands and Lowcountry closed early Thursday in anticipation of the severe weather.

As of 12:20 p.m, The National Weather Service in Columbia issued a Tornado Watch following SC counties effective until 8 p.m.:

In the Upstate, the following counties will be in a Tornado Watch until 5 p.m.:

“The fun really begins to hit the fan this afternoon after 1 p.m.,” Malsick said in his morning weather update. “Storm cells will strengthen and coalesce over the Midlands from Aiken to Lancaster near 3 p.m. reaching the I-20 corridor/Columbia by 4 p.m.”

Just before 2 p.m., the NWS Greenville-Spartanburg issued flash flood warnings for the following upstate counties in effect through 7 p.m. tonight: Laurens, Chester, York and Union. The storm has already dumped 5 inches of rain in parts of Greenville County.

While heavy rains and flash flooding threaten the Upstate today with an additional several inches of rain Thursday, forecasters at the National Weather Service in Columbia are most concerned with damaging straight-line winds from this powerful storm.

The thunderstorms could be strong enough to take down trees and power lines in the Midlands and the Upstate, according to the latest SC forecast.

Flash flooding is still a possibility in the Midlands, however. A flash flood watch has been issued for the following counties effective through this evening: Aiken, Chesterfield, Edgefield, Fairfield, Kershaw, Lexington, McCormick, Newberry, Northern Lancaster, Richland, Saluda, and Southern Lancaster.

Columbia, Aiken, Orangeburg and Florence are expected to see 2 to 3 inches of rain in the next day, according to the National Weather Service. While areas along the coast like Charleston and Myrtle Beach should only see between 1 and 1.5 inches of rain.

“…. This line of strong storms or squall line, your choice, continues southeast during the afternoon reaching Charleston by 7ish and  completely exiting the coast after midnight.,” Malsick said in his weather briefing.

Minor to moderate river flooding is expected over the weekend, the NWS Columbia said. Heavy winds are predicted across the Midlands through Friday, with Lake Wind Advisory conditions with gusts around 30 mph or higher, the NWS Columbia forecast said.

Another Day, Another Ridiculous Race Card Played In South Carolina