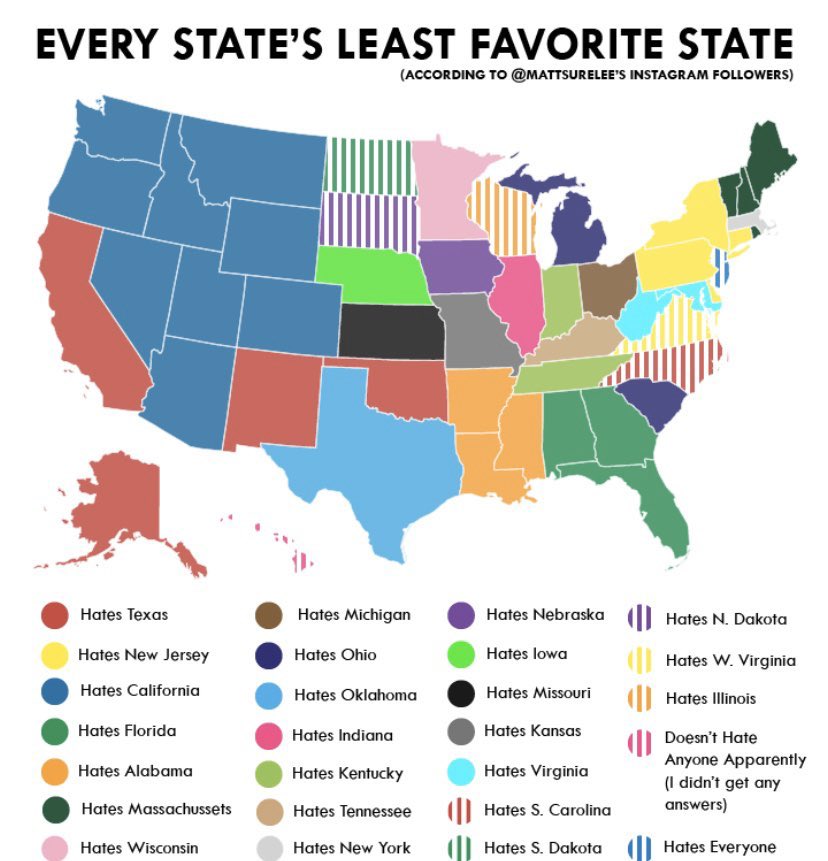 A map titled “every state’s least favorite state” that went viral on Twitter this weekend has everyone outside of the Palmetto State asking one big question: Why does South Carolina hate Ohio?

The map was made by creative genius Matt Shirley, who is known for his refreshingly honest and hilarious charts (like this pie chart showing the supply and demand of catcalling or this graph that accurately explains how we all feel on Sunday nights).

Shirley asked his 323,000 Instagram followers what their home state’s least favorite state is, and then made this magical map that went viral quickly on Twitter because all of us love to trash talk on our enemy states, apparently.

Most of the state enemies made geological and historic sense (like Kansas hating Missouri — not only are they next-door-neighbors, but the hatred dates back to the Civil War when Kansas was a free state and Missouri was a slave state).

Shirley wrote on Instagram that “it was amazing how unanimous these answers were, even with Flordia and New Jersey.”

A whole region of states including Alabama, Georgia and Florida — yes Florida — voted Florida as their least favorite state.

Then a whole region of states —New York, Pennsylvania, Delaware, and Connecticut — voted that they hated New Jersey.

And New Jersey people “hate everyone” according to the map (LOL).

But let’s get back to South Carolina, shall we?

“What’s up with South Carolina not liking Ohio?” Shirley wrote.

Instagram answered — and the majority who replied said it has to do with Ohio transplants invading the Palmetto state. Several said they are “bad drivers!” and accused Ohioans of adding minivans to the traffic problems.

“It’s because there’s a common trope of Ohioans coming up to South Carolina and driving up costs and making it harder to drive around,” a commenter said.

“Having grown up in SC, I can confirm our dislike of Ohio. Worst drivers ever. And they all drive minivans,” one person wrote

“Everyone from Ohio moves to SC and Ohio is the worst. Ever,” said another.

Some suggested this is a coastal-concentrated hatred.

“Both Myrtle Beach and Hilton Head’s populations are like 40 percent Ohioans at any given time. The interior of the state is far less passionate about their hatred of Ohio, in that they hate Ohio about as much as the rest of us do, which is a fair bit.”

“Lots of Ohio transplants in SC, especially in Charleston,” one person commented

Having lived on Hilton Head Island for four years now, I have witnessed the Ohio invasion, but I haven’t been here nearly long enough to hate any group of transplants. There’s a band on Hilton Head called “Not from Ohio” making fun of the fact that you’re unique on Hilton Head if you’re from anywhere besides Ohio. There are multiple Ohio-friendly bars supporting Ohio sports teams. You’d be hard-pressed to find a Hilton Head resident who didn’t know a friend or neighbor from Ohio.

Some people guessed that the hatred also has to do with football, because Clemson and Ohio State often face off in the playoffs.

And speaking of hating, there were a handful of comments on this post talking smack on Myrtle Beach.

“Because everyone from Ohio thinks Myrtle Beach is the nicest Beach which is a horrible abomination against beaches,” one person wrote.

“So many tourists who love Myrtle Beach which is SC is fondly called “Dirty Myrtle.” They can’t drive and have terrible taste and accidents. It’s perfectly justified,” another person said.

Specifically, some said they were more annoyed with people from the Buckeye State because they’re “trying to turn SC into Ohio.”

“They moved down here in droves, clearcut and fill the marshes, build cookie cutter tract housing, and change the culture for the worst — if you ask many native Carolinians.”

This hatred does not go both ways, by the way. Ohio people voted that Michigan is their least favorite state (probably because of football).

“Ohioian here. Was shocked to see SC Hates us because they are 100 percent not on their radar,” the Ohio native wrote.

According to a 2010 Charleston City Paper article titled “Ohioans have invaded the Lowcountry… and some folks wish they would leave,” this one-way hatred isn’t anything new.

In the early 2000s, a couple Charleston residents created “GoBackToOhio.com” which “inspired the RiverDogs to host the wildly popular Go Back to Ohio night,” the news site reported. The site is now shut down.

Another Charleston resident sold “Go back to Ohio” bumper stickers. Like the comments on Instagram, Charleston residents angry with Ohioans weren’t upset because they moved here. Their anger is more about Ohioans’ alleged inability to embrace the culture.

“People that bitch about grits, sweet tea, and South Carolina drivers, among other things, can go the hell back to whatever hole they came from and leave my beautiful state alone,” Tradd Bastian told the Charleston City Paper. “…if a person moves to a place, they should assimilate to that new environment. I wouldn’t expect to move to Ohio and set up bars that are for Clemson fans.”

This sentiment is evident all over the Internet. On a city-data.com forum post, one person from Ohio asked if South Carolina really hated outsiders. A person who moved from Ohio to Charleston replied:

“A lot of people from Ohio move to SC for some reason, I guess because it’s the straightest shot to the ocean.

“*Some* (not all) Ohioans stand out in various ways by

Their words, not mine.

Anyways, Surelee has created a bunch of less controversial maps with his same polling methods. According to his followers, Greenville is the best city in South Carolina and Greer is the worst.

‘He Is Incapable Of Being Honest’: SC Sheriff Accused Of Misconduct