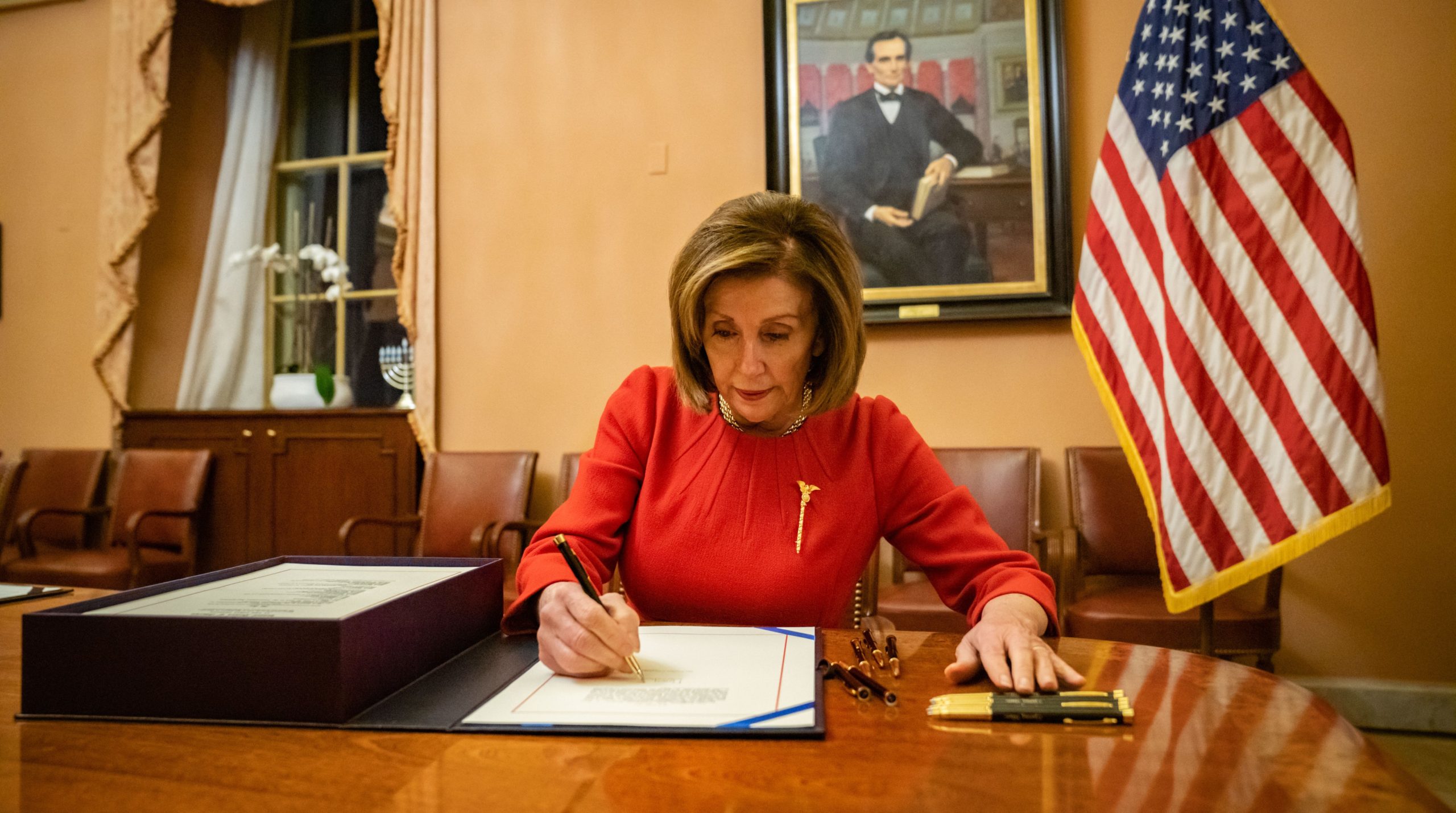 by ROBERT ROMANO || Does House Speaker Nancy Pelosi (D-Calif.) have a heretofore unnoticed, unconstitutional power to hold up an impeachment that has already been voted on?

That appears to be what she wants the American people to believe. That, articles of impeachment passed by the House, including H. Res. 755 that impeached President Donald Trump, are not actually “passed” unless and until she transmits it to the Senate.

The Speaker of House of Representatives – a constitutional office in Article I of the Constitution – cannot unilaterally defy the will of the House, and prevent legislation from being submitted to the Senate after it has been duly passed by the House. This is a work of fiction. Nothing in either the Constitution or House or Senate rules grants such power to the Speaker to “sit” on impeachment, thereby would prevent Senate action on such. It exists in the imaginations of liberal law professors.

In fact, House rules are very clear that the Clerk of the House must certify passage of legislation by the House, under Rule II(2)(d)(1): “The Clerk shall…  certify the passage of all bills and joint resolutions.”

Similarly, the Clerk under Rule II(2)(d)2) “shall examine all bills, amendments, and joint resolutions after passage by the House … to see that they are correctly enrolled…”

However, the Articles of Impeachment were neither a bill nor a joint resolution, they were included in a simple resolution, H. Res. 755.

According to Congress.gov, a simple resolution is “[a] matter concerning the rules, the operation, or the opinion of either House alone… Simple resolutions are considered only by the body in which they were introduced. Upon adoption, simple resolutions are attested to by the Clerk of the House of Representatives or the Secretary of the Senate and are published in the Congressional Record.”

Which is all the Constitution requires. The Constitution, under Article I, Section 2 states: “The House of Representatives… shall have the sole Power of Impeachment.” By that standard, President Trump is impeached.

Article I, Section 3 states: “The Senate shall have the sole Power to try all Impeachments. When sitting for that Purpose, they shall be on Oath or Affirmation. When the President of the United States is tried, the Chief Justice shall preside: And no Person shall be convicted without the Concurrence of two-thirds of the Members present. Judgment in Cases of Impeachment shall not extend further than to removal from Office, and disqualification to hold and enjoy any Office of honor, Trust or Profit under the United States; but the Party convicted shall nevertheless be liable and subject to Indictment, Trial, Judgment and Punishment, according to Law.”

So, very clearly, under the Constitution, the House has sole power to impeach, and the Senate has sole power to try all impeachments. There is nothing in there about transmitting anything to the Senate. All that is required for there to be a trial in the Senate is for the House to have acted to impeach an official, including the President, and, semantics aside, that threshold has clearly been met.

Rule II outlines the ceremony for the managers to present the articles, which when completed, “the articles shall be exhibited, and then the Presiding Officer of the Senate shall inform the managers that the Senate will take proper order on the subject of the impeachment, of which due notice shall be given to the House of Representatives.”

Pelosi’s theory of “holding” up the Senate trial, if there is one, is that under the aforementioned Senate rules, a Senate trial theoretically cannot begin until it receives this notice from the House. But that is not what the rule says. It says when the Senate receives notice from the House that it has appointed its impeachment managers – the traditional form for presenting the articles to the Senate – then the Senate shall inform the House that is ready to receive them for the purpose of exhibiting the articles and then conduct the ceremony.

But the Senate does not have to play along. Even if the rule precluded a Senate trial without the House naming managers or the ceremony being conducted — it doesn’t, but let’s pretend that it does — the Senate could just override the rule in the same manner it has overridden a 60 vote requirement on reaching cloture on confirming judges and executive branch officers.

Either way, the Senate can sidestep Pelosi’s ploy by simply informing the House that is ready to receive the articles, or the Senate could just declare it is proceeding to consideration of impeachment via the trial and notify the House of such and that it downloaded the articles off of the House’s website. For it to be otherwise would be for the Senate to convey, via its own rules, new powers upon the Speaker to keep the nation under the specter of impeachment for months or even years like a Sword of Damocles, proceeding to a trial a time of her choosing.

Now, this could all be a delaying tactic to forestall a Senate trial until after the New Year, giving members time to enjoy their vacations. Or it could be Pelosi’s intent is to delay the trial indefinitely because the case is too weak and the prospects of conviction too slim. In that case, then the tactic would appear to be to allow more time for the House to amass information that might be beneficial to their side at trial, or more time to apply pressure on weaker Republican Senators.

Suffice to say, Senate Majority Leader Mitch McConnell (R-Ky.) would be unwise to help create such an awful precedent. He should just proceed to the trial, whether Pelosi is ready or not. The fact is, for better or for worse, the House has already voted to impeach President Trump. What’s done is done. If the case is that weak, then moving for a swift dismissal should be a short order. Let’s get this trial over with.