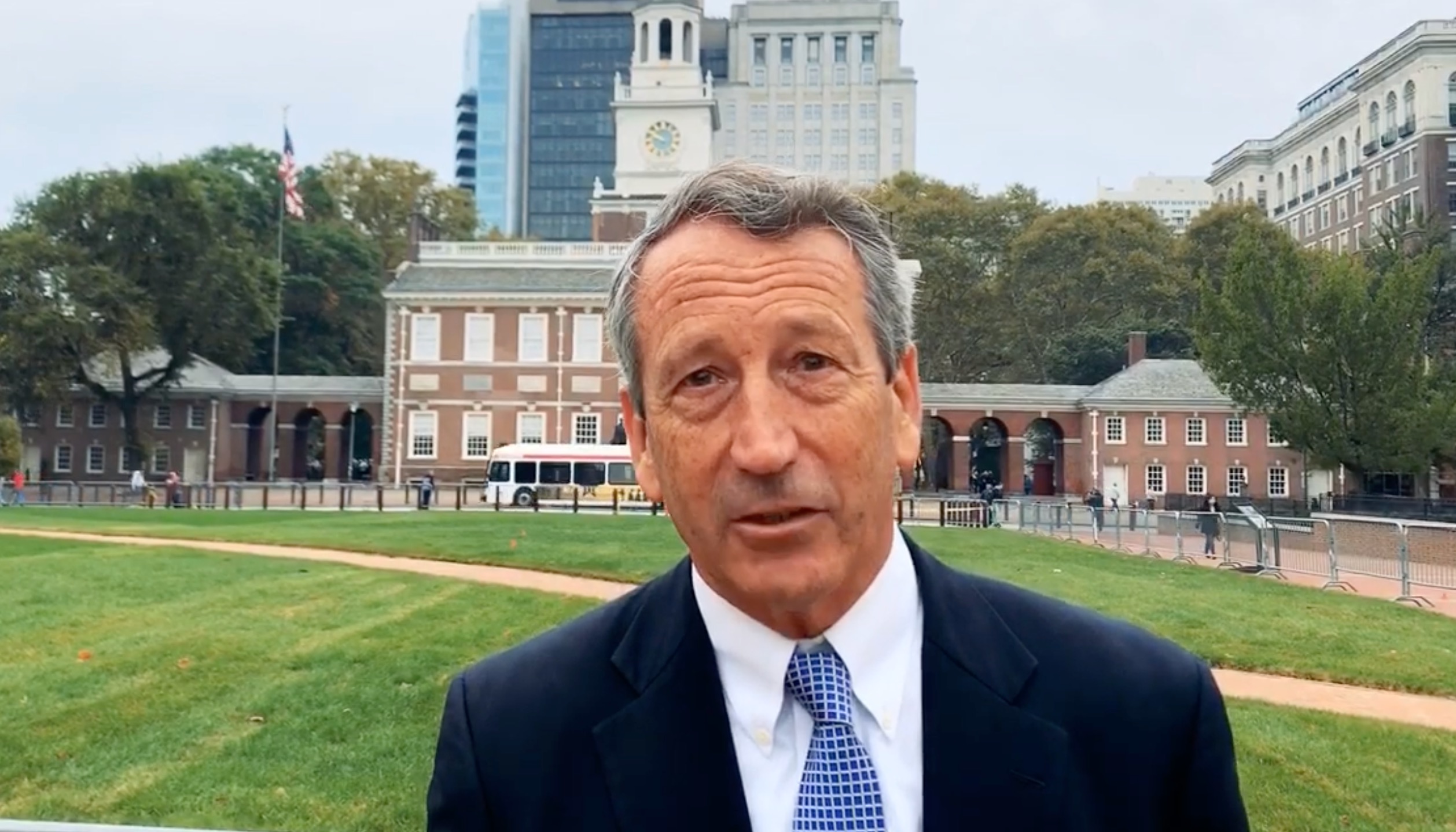 Former South Carolina governor Mark Sanford kicked off his 2020 presidential campaign outside of Independence Hall in Philadelphia, Pennsylvania on Wednesday … in front of one reporter. That’s right … one reporter.

“It didn’t really feel like a press conference,” noted Anna Orso of The Philadelphia Inquirer. “I was the only reporter there.”

And other than Sanford’s two volunteer aides, no one other than the press attended the event.

Carrying a check for one trillion dollars – signifying the current federal budget deficit – Sanford launched his “Kids, We’re Bankrupt and We Didn’t Even Know It” tour in the hopes of “sparking a needed conversation.”

America is indeed bankrupt. And a conversation as to the reasons why is indeed very necessary.

Are the “kids” listening, though? For that matter, is anyone listening?

“When (Sanford’s press conference) began, the only others around besides his two aides was a family thirty yards away with a selfie stick and a group of students from Paris who wanted to know why he had such a big check,” Orso continued. “Besides me, press conference attendees included two photographers – including an Inquirer photographer – and a 6ABC cameraman who showed up briefly.”

This news outlet speculated at the outset of Sanford’s long shot candidacy that there would be no shortage of media oxygen for GOP challengers to U.S. president Donald Trump. Apparently we were wrong about that … insofar as it relates to the Philadelphia media market, anyway.

In a video posted to YouTube, Sanford said he chose Independence Hall because it was “sacred ground.”

“This is where it all began,” Sanford said, gesturing to the historic 1753 structure that hosted the Second Continental Congress from 1775 to 1783 and the Constitutional Convention in 1787. “It’s amazing to think that the founding fathers were right here – in that building behind me – in 1776 (for) the Declaration of Independence and 1787 in the building and creation of our Constitution.”

In his interview with Orso, Sanford recalled Trump’s election day endorsement of his primary opponent, Katie Arrington, as the decisive factor in his first-ever electoral loss last spring. Prior to the 2018 GOP primary for the first congressional district, Sanford had not lost a race in his 24-year political career – including six congressional races and a pair of gubernatorial bids.

“He took a gun and shot me in the head,” Sanford said of Trump, “and that’s the end of that.”

Actually, Sanford has shot himself in the head plenty of times … and continues to be a definitionally imperfect messenger as a Quixotic presidential candidate. In fact, we have previously excoriated Sanford as a “definitional hypocrite” on the fiscal issues his presidential candidacy is seeking to raise – slamming him in no uncertain terms for his allegiance to the status quo in Washington, D.C. during his second turn in the U.S. congress.

“Seriously … are we to take instruction on fiscal matters from a guy who voted for liberal former U.S. speaker John Boehner?” we noted yesterday. “And then insisted Jesus made him do it?“

Sanford represented the Palmetto State’s first congressional district in Washington, D.C. from 1995-2001 and again from 2013-2019. In between, he spent two terms as governor of South Carolina from 2003-2011 – a stint marred by his infamous extramarital affair and subsequent implosion on the national stage in 2009. He is one of three GOP candidates challenging Trump – along with former Massachusetts governor Bill Weld and former congressman Joe Walsh of Illinois.

Sanford’s announcement tour moves to Harrisburg and Pittsburgh later today before embarking on the rest of its 11-state, 3,500-mile itinerary.

Will Lewis Appears In Court On Motion To Dismiss Testimony, Evidence