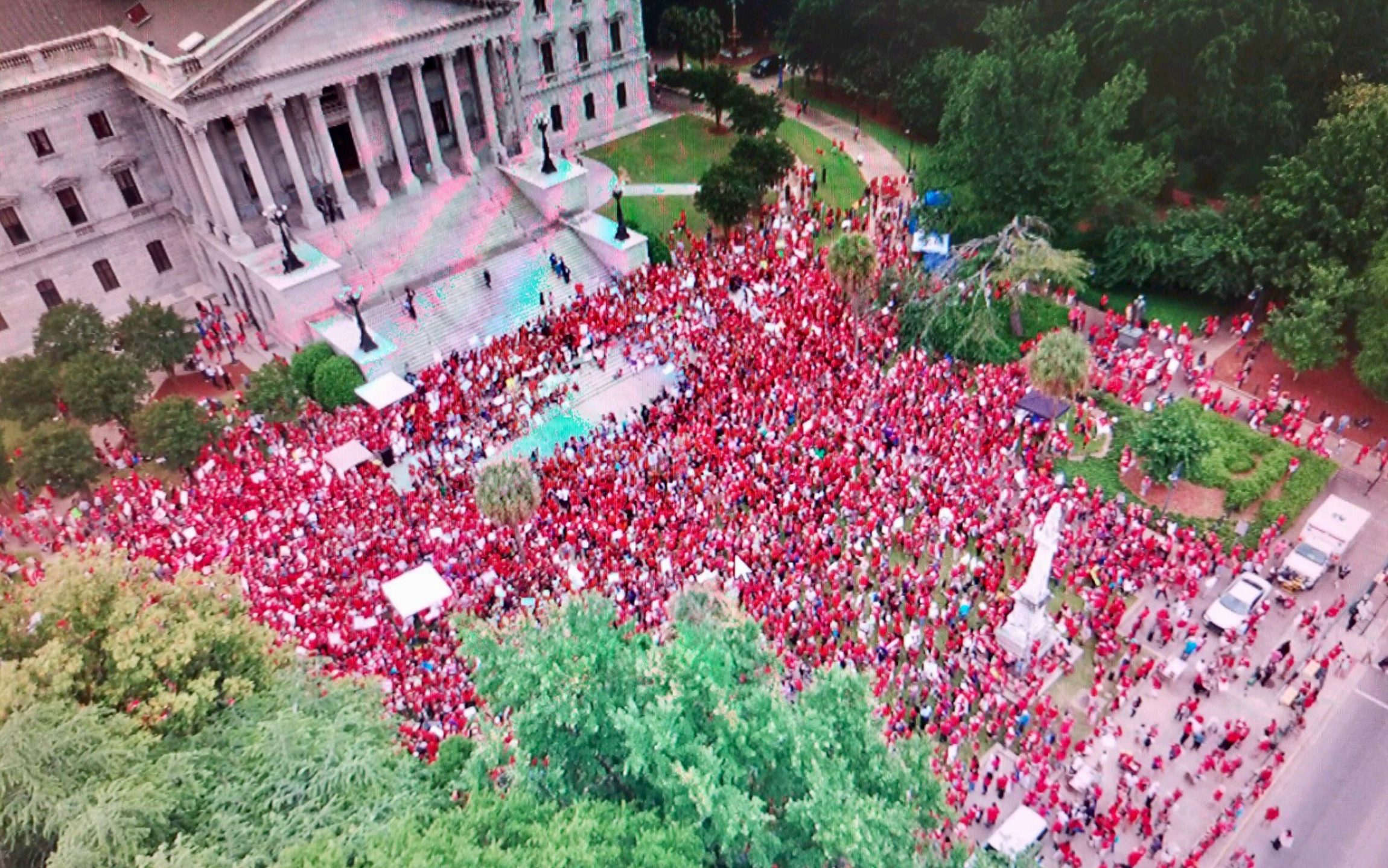 by CHARLES HALL || Happy May Day, dear comrade! It was refreshing to see the proletariat out in force in Red Square on May 1, although it seemed as though they were celebrating the downfall of the Tsar – savoring a victory as opposed to starting a battle.

All the red made me misread the scene. It was May Day, but it was not the proletariat – it was teachers. Also, it was not Red Square – it was the South Carolina State House. Still, the image of 10,000 teachers in red sure brought on flashbacks of my childhood. Every May, seeing the Soviet army march through Moscow showcased communist strength. Fortunately, I also remember that the Red scare failed.

Another memory of my childhood were the Canon camera commercials starring Andre Agassi which reminded us “Image is everything.”

And the image portrayed by last week’s rally was one of a group trying to form a socialist movement.

Before I go further, I must preface this writing by stating that I am a student currently pursuing a bachelor of science degree in history. I plan to follow that with a master’s degree in secondary education.  You see, I have wanted to be a teacher since I was sixteen years old. I must also disclose that I participate in political civil disobedience and discourse as an activist on a regular basis. I disclose this to say while I agree we need reforms in our education system in South Carolina, we need to be more observant of image.

I want to address three pieces of imaging that came across wrong in the teacher rally. First, the use of red. Second, the date. Third, walking out of the classroom.

Red is has commonly been used as a color of strife. Originating in the French Revolution, red started being used to symbolize workers who died in the struggle against capitalism. In a lot of countries, red is seen as the color of “social democracy” – better known as socialism. Ironically, in our state’s history the color red was the color of “Big Red” or the flag that flew over the Citadel cadets as they fired the first shots of the civil war.  As a civil rights advocate I avoid the color myself because of the negative confrontational aspects. To me, the color is more symbolic of the blood shed by christian martyrs around the world.

You may notice I opened this column with “Happy May Day Dear Comrade.” I found it highly ironic that the date selected was the date the former Union of Soviet Socialist Republics (USSR) chose to celebrate as its victory day. It is also International Workers Day – a holiday celebrated by labor unions.

A couple of other things came to mind with the timing of this rally. First, the rally was held at least two weeks too late – as any proposed legislation must pass a chamber by a certain date in order to be considered by the other chamber prior to the end of that year’s legislative calendar. The rally was held with well before that date – with only a handful of legislative days remaining on this year’s calendar.

Secondly, at the time the rally was held the state budget had already been voted on in each chamber and was headed to a conference committee. Two of the issues raised by teachers are handled through the budget process.

Simply put, outside of being a public relations stunt the rally was held way too late in the year. Finally, going back to optics it makes little sense to use a union tactic when teachers (as public employees) do not have the ability to participate in collective bargaining.

My last contention deals with these teachers walking out of their classrooms. This was a union-style strike action – with teachers holding what could be (and should be) considered an organized one-day strike. Teachers in our public schools cannot be members of a union. While there is no state law prohibiting union membership by public school teachers, a teacher can not be a member because the state right-to–work law exempts the government from the definition of an employer subject to collective bargaining. This was affirmed in a 2000 S.C. supreme court ruling.

As for the demands made by teachers at the rally, I support them – although I would point out that a teacher pay raise was already approved in the state budget. I will call upon our legislature to next year live up to its own noblesse oblige and fully fund our students. Smaller classroom sizes are also needed as we are seeing a growing number of students who require more one-on-one instruction time due to learning disabilities. A better mental health system is also needed in our entire state – not just our schools. Furthermore, I would like to offer up that we need to privatize the state’s school bus system. There is no reason for the state to own and maintain its own fleet outside of hurricane evacuation. But these are issues for further discussion in another writing.

The South Carolina “Red Scare” is how I will remember Wednesday May 1, 2019. I will also remember it as the day when teachers lost the high ground optically. Wearing a color of rebellion while holding a strike on International Workers Day ruins the image of teachers – and for a teacher, image is everything.  For a teacher, image is power. Shirking their noblesse oblige to participate in a rebellion