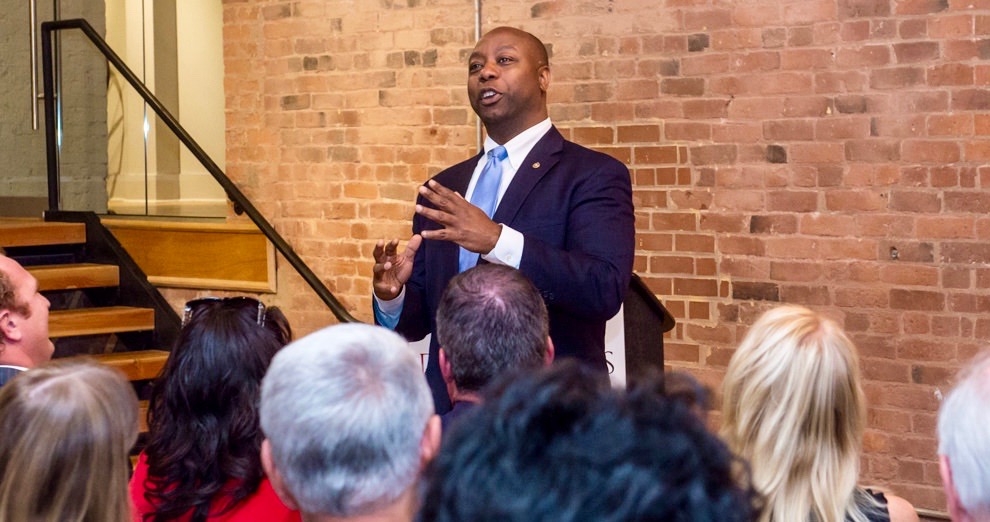 Scott voted on Wednesday to advance Farr’s nomination to the floor of the chamber – although he made it clear at the time he was undecided as to how he would vote on the nomination itself.  Scott’s initial vote drew contempt and derision from the left.  Now he is facing similar venom from the right.

As we noted in our prior coverage, Farr’s nomination is controversial because of his role in drafting a 2013 voter identification law in North Carolina that the U.S. fourth circuit court of appeals later struck down as unconstitutional.  According to the court, the law “target(ed) African Americans with almost surgical precision” and “impose(d) cures for problems that did not exist.”

Additionally, Farr represented U.S. senator Jesse Helms of North Carolina after the latter’s 1990 reelection campaign mailed 150,000 postcards to residents in heavily-black districts informing them that “residency requirements were strict and vote fraud was punishable by imprisonment.”  In a recently unearthed memo, the U.S. Department of Justice (DOJ) concluded at the time that these postcards were “designed to intimidate and threaten black voters throughout the state of North Carolina.”

This news outlet’s founding editor, Will Folks, criticized Scott mightily four months ago when he blocked the nomination of Ryan Bounds to fill a seat on the über-liberal U.S. ninth circuit court of appeals.

Naturally we are about to tee off on Scott again, right?

In Bounds case, we believe Scott’s vote was wrong – and unfair.  More than a quarter century ago, as an undergraduate student at Stanford University, Bounds had the audacity to suggest that political correctness in America had gotten out-of-control and that “race-focused groups” often did more to stoke division and intolerance than they did to alleviate it.

“I submit that the Multiculturalistas, when they divide up by race for their feel-good ethnic hoedowns, engage in nearly all of the fundamental behaviors of groupthink,” Bounds wrote in one of his college editorials.  “The existence of ethnic organizations is no inevitable prerequisite to maintaining a diverse community – white students, after all, seem to be doing all right without an Aryan Student Union.”

We wholeheartedly endorse that contention …

Bounds had absolutely nothing to apologize for, in our estimation, but he apologized nonetheless … saying he regretted “the obnoxious tone and misguided sentiments” expressed in his remarks.  He further vowed to display “appropriate sensitivity to the views of others – particularly those from marginalized communities” if appointed to the bench.

Scott was unmoved … and sank his nomination anyway.

In the case of Farr, Scott is standing on much firmer ground when it comes to his opposition – even if we continue to believe he reached the wrong decision.  Ultimately, though, it is his decision.  And whether we agree with his logic or not, in this case it is much harder to say his objections weren’t legitimate.

“Unlike Bounds, we would be hard-pressed to argue that Scott is outside of the lines if he winds up opposing Farr,” we wrote yesterday.

Accordingly, you will hear no such argument from us … although we do believe Scott made the wrong decision.

Got something you’d like to say in response to one of our stories? Please feel free to submit your own guest column or letter to the editor via-email HERE. Got a tip for us? CLICK HERE. Got a technical question or a glitch to report? CLICK HERE. Want to support what we’re doing? SUBSCRIBE HERE.
Banner: U.S. Department of Housing and Urban Development

What Happens To Joe Cunningham If Nancy Pelosi Wins?