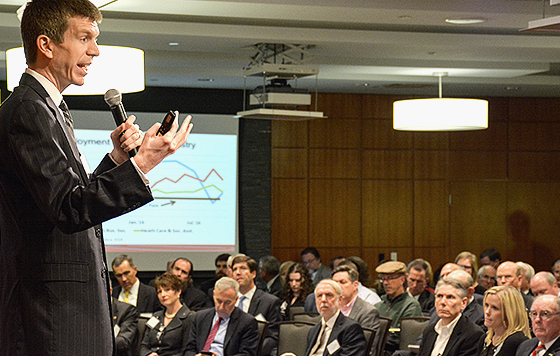 South Carolina’s economic outlook will be the topic of discussion at an annual event sponsored by the University of South Carolina’s Darla Moore School of Business next week.

Over the last thirty-seven years, the gathering has “brought public and private sector leaders an unbiased – and reliable – economic forecast for the coming year,” according to organizers.

“After a decade of expansion, what’s next for the U.S. and South Carolina economy?” is the question the gathering seeks to answer.

Wait … a decade of expansion?  Could have fooled us looking at income levels … or the size of the state’s work force relative to the working age population.

Maybe some people have seen economic expansion over the past decade, but according to the metrics that matter – work and wages – most middle class residents of the Palmetto State are still struggling.

Anyway, the event – which charges attendees a $75 registration fee – will take place on December 4 (this coming Tuesday) at the USC Alumni Center located at 900 Senate Street in downtown Columbia, S.C.  A lunch and networking reception will be held from 11:45 a.m. EST until 12:45 p.m. EST – which is when the conference begins.

A particular focus of this year’s event?  So-called “opportunity zones” created via the 2017 tax law.

Earlier this year, the U.S. Treasury Department approved nearly 9,000 such zones – economically “distressed” areas in which investors are being encouraged to park their capital gains earnings in exchange for tax breaks.

“Equity investments in real estate and business may qualify for significant federal tax incentives,” organizers noted.  “Our panel will share ideas for building economic development opportunities in the state.”

We bet they will …

Last month, the Internal Revenue Service (IRS) introduced its first set of proposed regulations for these zones.  These regulations immediately prompted concerns as to whether these tax breaks were genuinely intended to promote “opportunity” and investment in the designated “distressed” areas – or if they were just another handout to big corporations and wealthy investors.

“There is a serious risk that opportunity zones will foster a lot of investor interest, without substantially benefiting the communities,” noted tax analyst Steve Rosenthal in a recent column for Forbes.  “Only robust reporting will tell us whether this increasingly generous tax program is achieving its stated ends of drawing new capital into economically struggling communities and improving the lives of their residents.”

Needless to say we will keep a close eye on this issue as it comes to the fore in the Palmetto State.  In the meantime, those looking to sign up for this economic outlook conference can do so by clicking here.