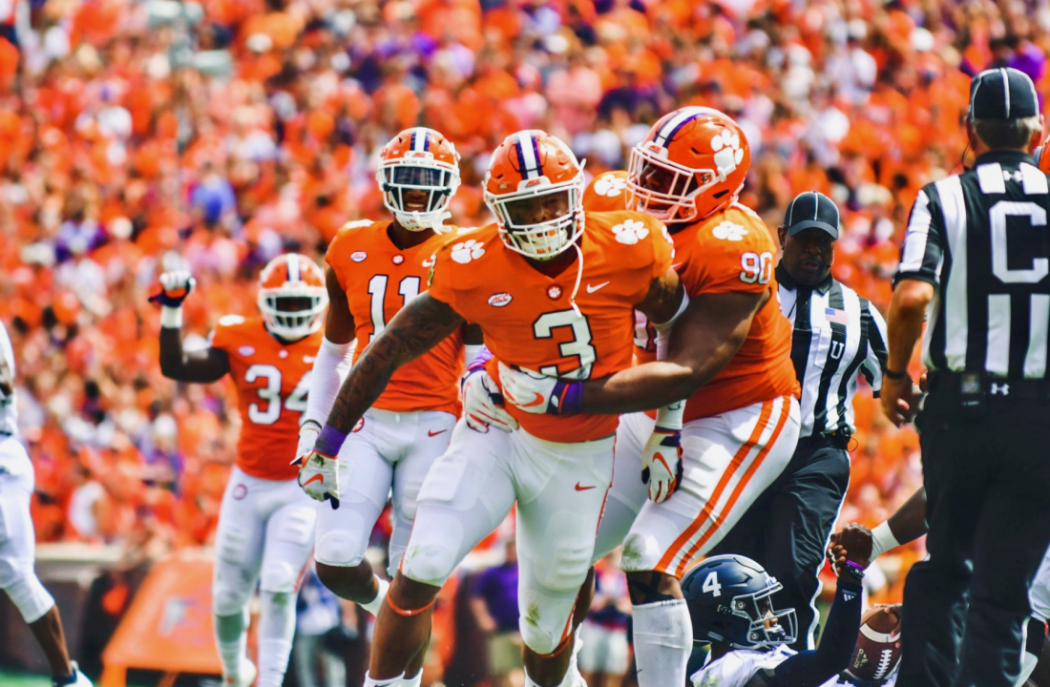 An impressive 79,844 fans showed up for the game – which wound up being the only major college football contest played in the Carolinas on a wet, worrisome weekend.

The University of South Carolina canceled its home game as a result of Florence, but Clemson (3-0, 0-0 ACC) responded to the situation by moving its kickoff forward three hours.  It was the right call, too.  After a sluggish first quarter, the Tigers proceeded to steamroll the helpless Eagles of the Sun Belt Conference – with the weather cooperating right up until the end of the game.

Using a balanced offensive attack and both of their top two quarterbacks, Clemson amassed 595 total yards (309 on the ground and 286 through the air) and got virtually all of its playmakers into the the stat sheet.

Senior quarterback Kelly Bryant started the game for Clemson, improving to 15-2 since taking over for 2017 first-round draft pick Deshaun Watson last season.  Bryant completed seven of ten passes for 68 yards with no touchdowns and one interception.  He also ran six times for 27 yards.  And while it obviously wasn’t his best game statistically, it didn’t need to be.

True freshman Trevor Lawrence – the former No. 1 national recruit – came up big when his number was called, completing 12 of 19 throws for 194 yards with one touchdown and one interception (his first at the collegiate level).  The 6-foot-6, 215-pound quarterback saw almost all of the action in the second half after Bryant sustained a chest bruise on a hard fall in the second quarter.

“We ended up finishing well,” Lawrence said after the game. “We stalled on a few drives but, for the most part, we moved the ball well.  We are trying to get better in all areas.  We are focusing on more specific plays and are trying to be more consistent.”

Third-stringer Chase Brice also got in on the action, completing both of his passes for 24 yards in mop-up duty.

On the ground, it was a banner day for the Tigers’ top running back.  A week after “showing the money” to the Texas A&M Aggies, sophomore running back Travis Etienne reeled off a career high 162 yards on 16 carries – including a pair of touchdowns. 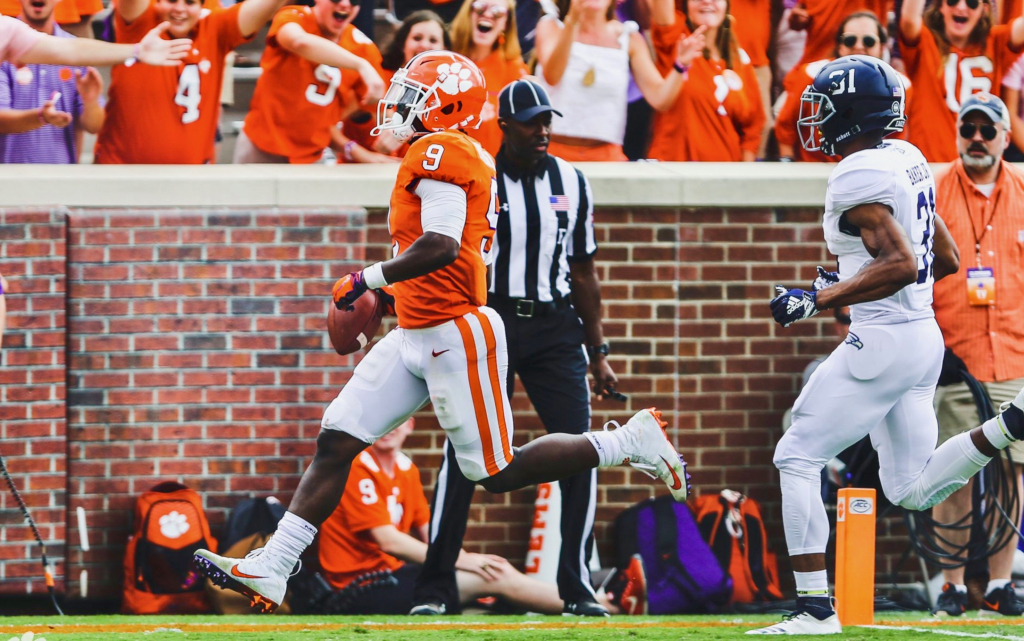 Graduate senior tailback Adam Choice and junior Tavian Feaster also found the end zone for the Tigers, who are able to rotate running backs like they rotate signal-callers.

“I feel like we all complement each other,” Etienne said of his fellow tailbacks.  “We can do different things with the ball and, when we rotate, we are all fresh and play our best.”

Among the receiving corp, freshman wide receiver Justyn Ross led the way with three receptions for 103 yards – including a 57-yard touchdown reception from Lawrence.  All told, fourteen Tigers caught passes on Saturday.

On defense, coordinator Brent Venables’ All-Americans showed their stuff – with defensive ends Clelin Ferrell and Austin Bryant both registering two sacks and multiple tackles for loss.  Ferrell now has five sacks and 6.5 tackles for loss on the season to lead the team in both categories.  In a preview of things to come, true freshman Xavier Thomas – another of Clemson’s heralded recruits – registered the first sack of his collegiate career in the game.

“I just loved the attitude,” Venables said after the game.  “We played a bunch of guys, and everybody got in there and did well.  Regardless of who you’re playing, it still comes down to details in alignments and eyes and footwork.  Again, it just requires you to be very precise. You have to do a lot of little things because they’ve got angles and leverage on you.”

Clemson opens conference play next week on the road against Georgia Tech, which has lost back-to-back road games against South Florida and Pittsburgh.  That game will kickoff at 3:30 p.m. EDT from Bobby Dodd Stadium in Atlanta, Georgia.

Dabo Swinney Wins Another Coach Of The Year Award