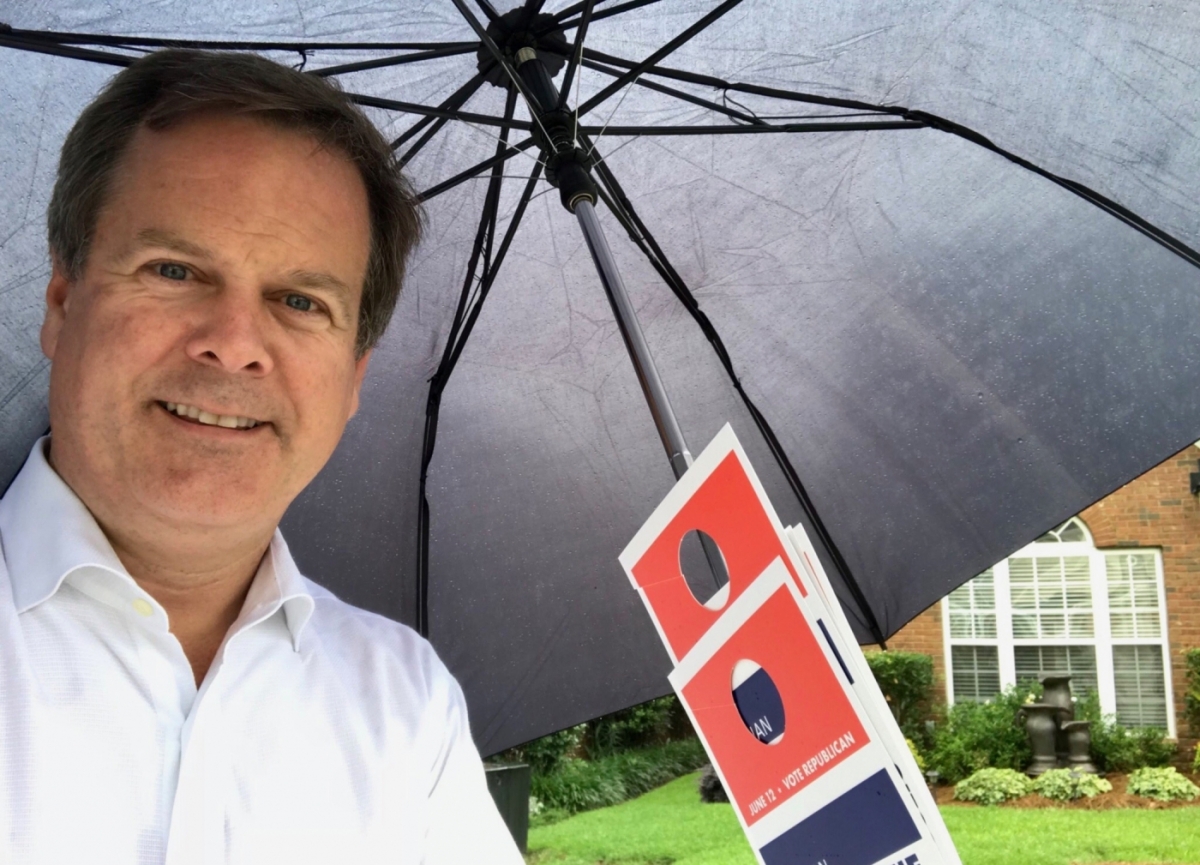 FISCALLY LIBERAL “REPUBLICAN” WANTS TO HAVE HIS CAKE AND EAT IT, TOO …

It’s no secret the fiscally liberal “Republican” covets the S.C. Senate district vacated this week by veteran state senator John Courson – who resigned as part of a plea deal related to the ongoing #ProbeGate investigation into corruption in state government.

Courson, another liberal “Republican,” had held the seat for more than three decades.

Will Ballentine follow through on his aspiration to fill those shoes?  Especially now that such a campaign has become an “either/ or” proposition for him?

By that, we mean Ballentine cannot continue to seek reelection to S.C. House District 71 (map) – a seat he has held for more than thirteen years – while campaigning in the special election for the seat vacated by Courson.

At some point, he will have to choose …

How come?  Because both elections are scheduled to be held on the same day … and state law prohibits individuals from running for two offices at the same time.

Most strategists would probably counsel Ballentine to take the plunge and declare himself as a candidate for the Senate seat – but there’s a problem with that idea.  Well, there are several problems with it, actually.

First, uber-influential Columbia, S.C. attorney Dick Harpootlian is likely to mount a bid for this seat.  That means an experienced, well-funded Democrat is likely to throw in (and make no mistake, Harpootlian will go all in) for a district that was won by Hillary Clinton in 2016.   Oh, and in what could be a blue wave election, no less.

That bodes poorly for Ballentine … who would likely struggle to turn out his GOP base given his proximity to the #NukeGate debacle, South Carolina’s spectacularly failed command economic intervention in the energy industry.

First, Ballentine voted for the now-notorious Base Load Review Act (BLRA) – which socialized more than $2 billion (and counting) of investment risk associated with the failed V.C. Summer nuclear power station expansion.  This year, he voted for an anemic “solution” – a partial, temporary “repeal” of the hated law that fails to make ratepayers whole (and which could conceivably deny them a nice payday as part of a proposed private sector deal).

Expect Harpootlian to “nuke” him with those votes …

More troubling for his immediate prospects, Ballentine now finds himself confronted by a brutally compact (and complicated) calendar when it comes to plotting his pathway forward.   First, he faces GOP voters on June 12 in the primary election for the House seat he currently holds – an election in which he is favored.   Ten days later, though, filing opens for the Senate seat he covets.

How on earth does a candidate bail on voters just ten days after asking them for their support?

This time frame could become even more compressed if Ballentine’s House race goes to a second vote.

Assuming Ballentine fails to claim more than fifty percent of the “Republican” vote on June 12, he would find himself in a runoff election against a GOP rival on June 26.

Four days after that, on June 30, filing for the Senate seat would close.

In other words, Ballentine could conceivably claim the GOP nomination for this House seat on a Tuesday – and then file to run for the Senate no later than Saturday of the same week.

Here’s why all of this matters: If Ballentine chooses to run for the Senate after winning the GOP primary for his House district, “Republicans” would be left without a nominee in that race.

Wait … there’s no way anyone else could step up and become the GOP nominee?  Nope.

State law allows political parties to substitute nominees in certain situations, but not when a politician bailed for what he believed to be greener pastures – which is exactly what this is.

We reached out to Ballentine in the hopes of getting him to commit to one race or the other … which he declined to do.

“I’ve been working for months on this House race and that’s got my full attention,” Ballentine told us.  “I can’t take anything for granted.  Two opponents and eight days to go, and it’s been a tough race, but I’m not going to let out-of-state special interests take this seat away.”

Okay … we don’t really care about “out-of-state interests” but whatever.

We challenged Ballentine on this issue directly, asking him as follows: “If you are going to seek that (Senate) seat – shouldn’t you let voters choose someone who is going to fill the current one you hold?”

Once again, he declined to commit.

“I’m not gonna get distracted over this with seven days to go,” he told us.  “I’m out working hard up until 7:00 p.m. Tuesday (when polls close) and not taking anything for granted.”

Ballentine owes it to voters in S.C. House District 71 to make a decision on his future plans before he stands before them on June 12.

If he wants to run for the S.C. Senate, he should drop out of the House race now and let the remaining candidates battle it out for the GOP nomination.  If he decides to stay in the House race, then he should promise voters he will not seek the Senate seat vacated by Courson.  At least not now.

Winning a party’s nomination and then abandoning it days later (without any opportunity for the party to choose a replacement) is simply unfair to voters.

Ballentine’s slogan is “people, not politics.”  He now has an opportunity to live up to those words by doing the right thing in this situation …

So far, though, he’s putting his own politics over the people he claims to want to represent …