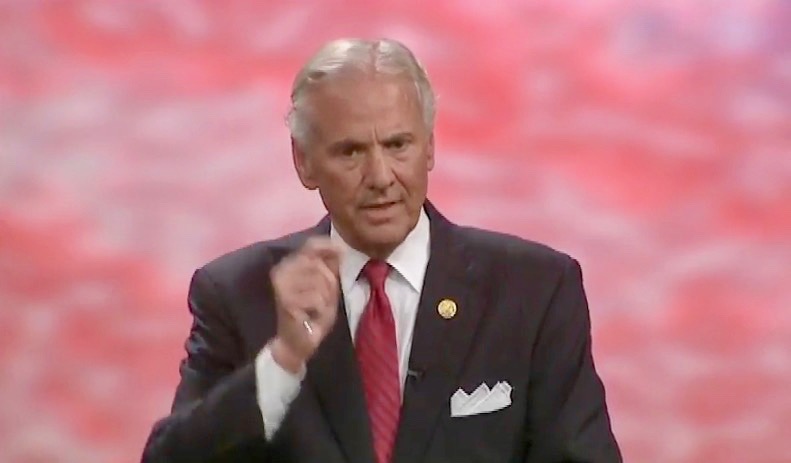 All five “Republican” candidates for governor of South Carolina appeared onstage at Clemson University on Wednesday night – hoping to distinguish themselves in the first of two clashes scheduled prior to the June 12 partisan primary elections.

Eh … to say we were unimpressed is an understatement.

This wasn’t a debate, people.  This was a piss poor display of rote memorization – five people pandering to the lowest common denominator of the state’s GOP base using hackneyed platitudes and self-aggrandizing anecdotes.

Seriously … was there an authentic moment in this hour-long charade?  We didn’t catch one …

Upstate businessman John Warren reminded us for the umpteenth time that he is a “conservative, a Marine and a businessman.”  Lowcountry labor attorney Catherine Templeton trotted out her familiar “the media call me a conservative buzzsaw” line (actually that’s what Templeton calls herself, the “media” think the term is stupid).

In keeping with the recycled stump speech rhetoric, lieutenant governor Kevin Bryant threw out his tired “I’m a politician and a drug dealer” joke – referencing his day job as a pharmacist in Anderson County, S.C.  Amazingly, though, none of Bryant’s opponents challenged him on the millions of tax dollars he’s raked in as a “drug dealer.”

“Political malpractice to leave that fruit on the vine,” one Palmetto political strategist told us.

There was a lot of “political malpractice” in this debate.

Incumbent Henry McMaster?  He guffawed incessantly about being endorsed by U.S. president Donald Trump – which is basically the extent of his moribund campaign’s messaging.

McMaster also bragged on multiple occasions about how he “sent troops to the border” – as if South Carolina was the tip of the spear of a Mexican invasion or something.

We wouldn’t suggest it, but if you feel the need to punish yourself you can watch the debate in its entirety here …

Yeah … it’s a lot like that Paul Simon and Art Garfunkel lyric about “going to the candidate’s debate.”

“Laugh about it, shout about it, when you’ve got to choose … every way you look at this you lose.”

(Here’s the Lemonheads’ version of that classic for those of you uninitiated).

As far as we’re concerned, this entire affair was stilted, scripted (albeit poorly) and soulless.  As such, it offered very little in the way of a legitimate look at the GOP gubernatorial hopefuls – most of whom simply regurgitated familiar talking points in response to softball questions from panelists.

In fact several of the questions weren’t even accurate – like when Gavin Jackson of state-owned S.C. Educational Television (SCETV) bemoaned the “underfunding” of critical needs in state government.

“State agency budget requests consistently show important and critical needs in the state are underfunded, such as transportation infrastructure, the underfunded base student cost and prison security issues, just to name a few,” Jackson asked during the debate. “Is it proactive to rally against a gas tax increase and also cut taxes when there are so many critical needs that are underfunded in South Carolina?”

That’s not a question, people … that’s a talking point.  And no, we’re not even remotely surprised it came from a “reporter” in the employ of a taxpayer-funded outlet.

Here’s the thing about Jackson’s “question.”  State budgets are not underfunded, they have been growing by billions of dollars in recent year.

Infrastructure funding?  The base budget for the S.C. Department of Transportation (SCDOT) doubled from 2010 to 2015 – and that was before a massive borrowing bill passed in 2016 and before the infamous gas tax increase was approved last year.

Base student cost?  That figure is just a fraction of education funding in the Palmetto State.  In the current budget, taxpayers are shelling out a record $16,211 per student, per year for the worst government-run education in America.

(Warren claimed during the debate this figure was $13,000, but he neglected to include bond money).

In other words, Jackson’s question was a complete and total fabrication.

Of course former lieutenant governor Yancey McGill responded by saying it was “a good question.”

Speaking of McGill he needs to drop out of this race … like yesterday.  Every time he opens his mouth, those of us unfortunate enough to hear what proceeds from it get dumber.  Seriously: Doesn’t he have some family drama he needs to attend to, anyway?

Anyway, McGill gets credit from us for not falling down or falling asleep during the debate.  Or dying.

Same goes for McMaster, who actually managed to string together a few coherent syllables during the hour-long exchange.  In fact, given the low expectations of him heading into this debate McMaster was arguably the star of the show (even if it required him to repeat himself and look down at his notes half the time).

McMaster was fortunate, though.  The genteel forum provided for limited interaction between the candidates – i.e. the sort of exchange where he is most vulnerable.  In this debate, there was none of that.  In fact each of the GOP hopefuls politely cut off their rehearsed remarks off mid-sentence when moderator Charles Bierbauer called “time.”

The only real “heat” generated during this debate came during a discussion of abortion – when Warren ripped into McMaster for endorsing pro-choice “Republican” lawmakers (and ripped into Templeton for voting for a pro-choice Democrat in 2010).

Warren’s broadside was the only real punch thrown during the debate – and it came right as Templeton had delivered her most personal, compelling anecdote (about refusing to even consider aborting one of her babies despite news of a potential prenatal complication).

Speaking of Templeton … what was up with that eye makeup, sister?

Don’t get us wrong, this news site’s notoriously caddish founding editor Will Folks absolutely loved it … but our guess is it might have been a little bit too “come hither” for the socially conservative Upstate.

Bottom line?  Templeton’s eye makeup aside, no candidate stood out in this forgettable forum.  No major blows were thrown, meaning none landed.  Meaning no numbers moved.

It was a wash … expect perhaps for McMaster, who managed to avoid the sort of embarrassing misstep that could have further narrowed his rapidly shrinking path to victory.