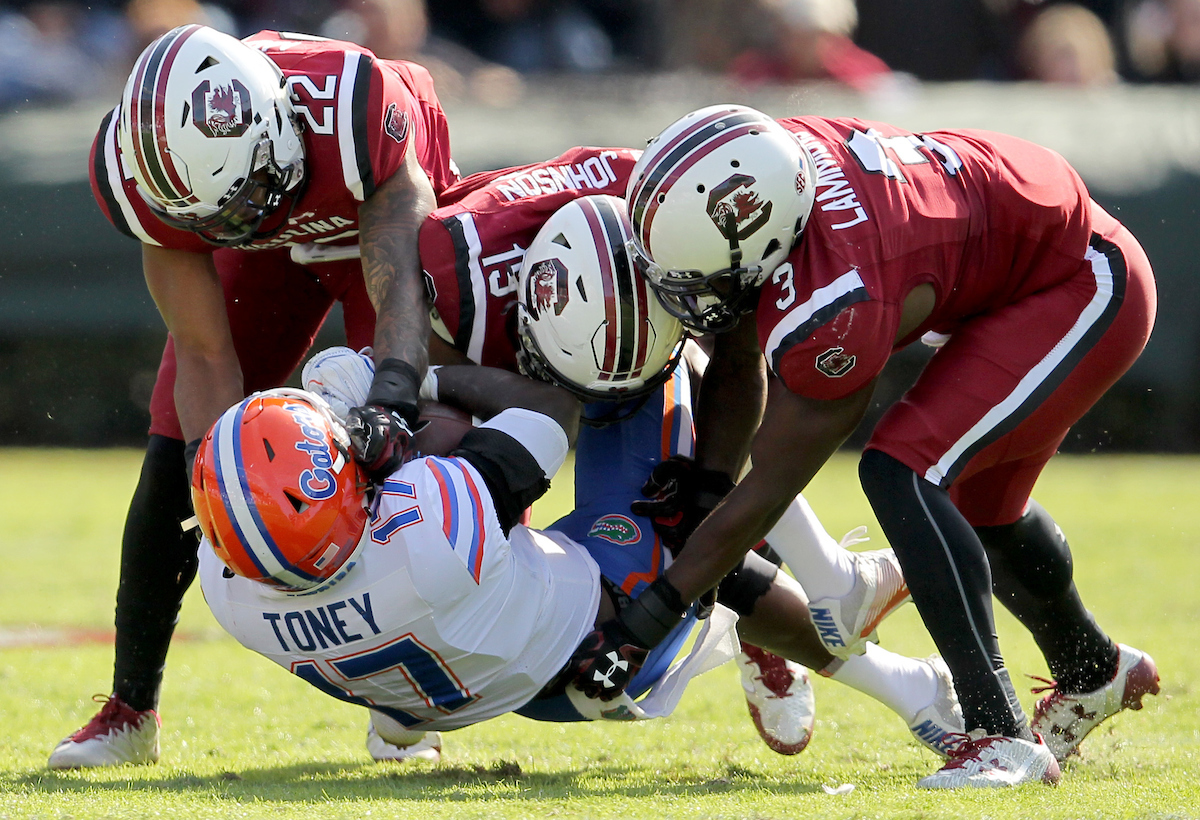 Do they deserve it?  Probably not … but long-suffering Gamecock fans will take it, even if their team does resemble the Keystone Kops at times (especially on offense).

The Gators (3-6, 3-5 SEC) committed three turnovers of their own in this topsy turvy matchup – including a lost fumble on what appeared to be a game-tying #PickSix against Gamecock quarterback Jake Bentley in the first quarter.

Bentley – who turned in arguably the most erratic start of his career – was picked off by Gator freshman cornerback CJ Henderson after a miscommunication with wide receiver Bryan Edwards.  After making the interception, Henderson cut to the middle of the field and was racing for what appeared to be a game-tying touchdown.

He fumbled just before breaking the plane, though, and running back A.J. Turner scooped up the ball and advanced it 24 yards for a South Carolina first down.

It was one of many bizarre back-and-forth plays in an ugly 28-20 South Carolina win watched by an announced crowd of 79,727 at Williams-Brice Stadium.

Another bizarre play took place early in the fourth quarter when Bentley appeared to be going down in the end zone for a safety.  On his way to the turf, the sophomore signal-caller threw up a desperation heave that seemed sure to be intercepted.  Instead, tight end Hayden Hurst made a spectacular one-handed grab despite having a Florida defender draped all over him.

The throw should have been a #PickSix.  It wound up being a Gamecock first down.

“At the end of the day we won,” Bentley said after the game.  “It’s better to learn from something with a W.”

Bentley completed 19 of 29 passes for 249 yards with no touchdowns and a career-high three interceptions.  The 6-foot-3, 220-pound Opelika, Alabama native now has five picks in his last two games after throwing just four in his first eight games (and none in his last four starts).  He did make up for his mercurial aerial exploits with a pair of touchdown runs – giving him four rushing scores in the last three games.

Since taking over the reins of the Gamecock offense midway through the 2016 season, Bentley is now 11-6 as South Carolina’s starting quarterback. 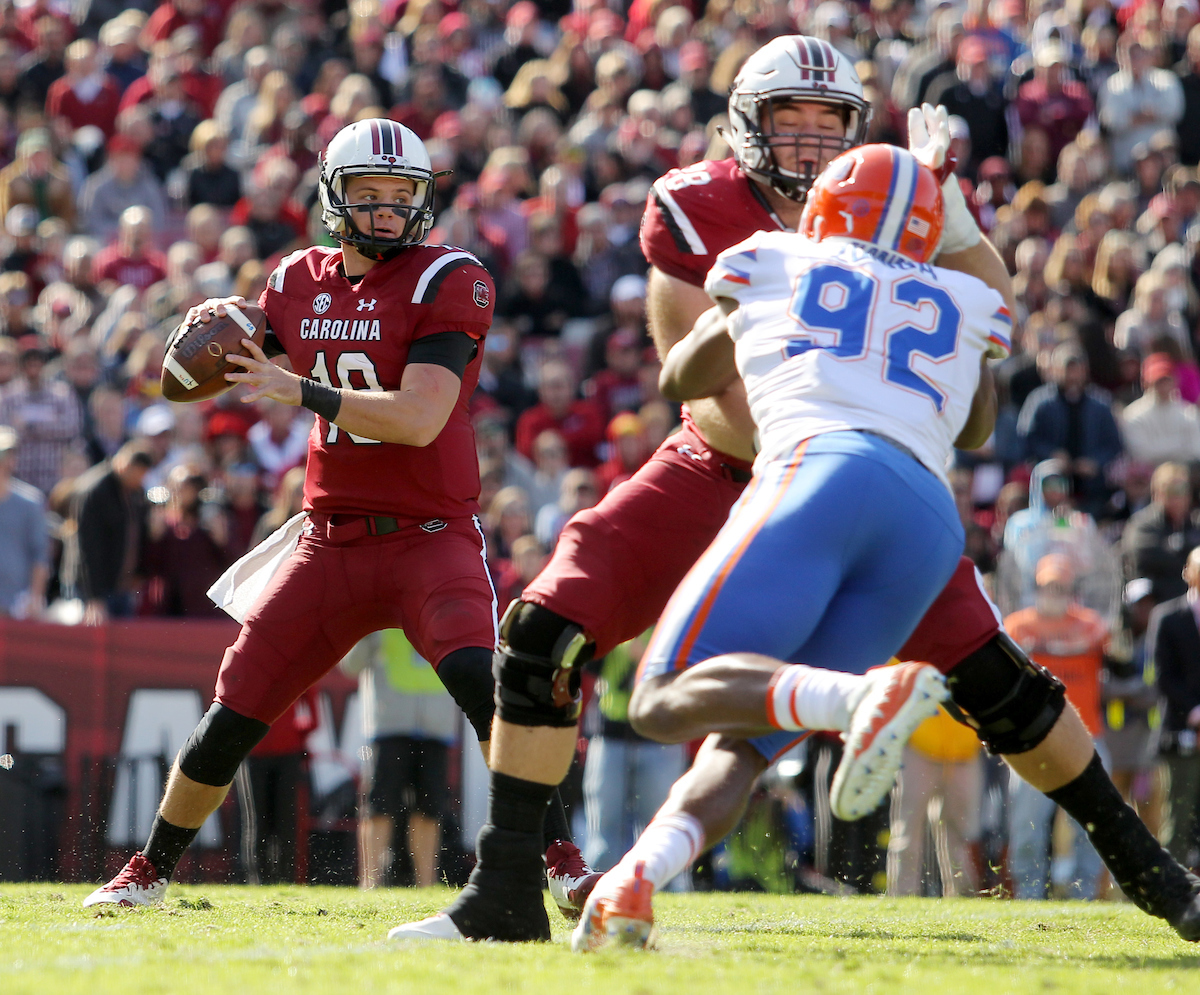 South Carolina was able to overcome Bentley’s miscues thanks to the reemergence of its ground game – which gashed a Gator defense missing several of its top performers.

After reverting to early-season form in a 24-10 loss to top-ranked Georgia last week, the Gamecocks rushing attack amassed a season-high 220 yards on Saturday against the injured-riddled Gators.

Turner ran for a career-high 136 yards on 22 carries, while another redshirt sophomore – Mon Denson – picked up a career-high 61 yards on 13 carries.  Denson’s total included touchdown runs of 12 and 24 yards.

“We’ve got a lot of injuries on this football team,” Shannon said after the game.  “We had a lot of guys play injured today.” 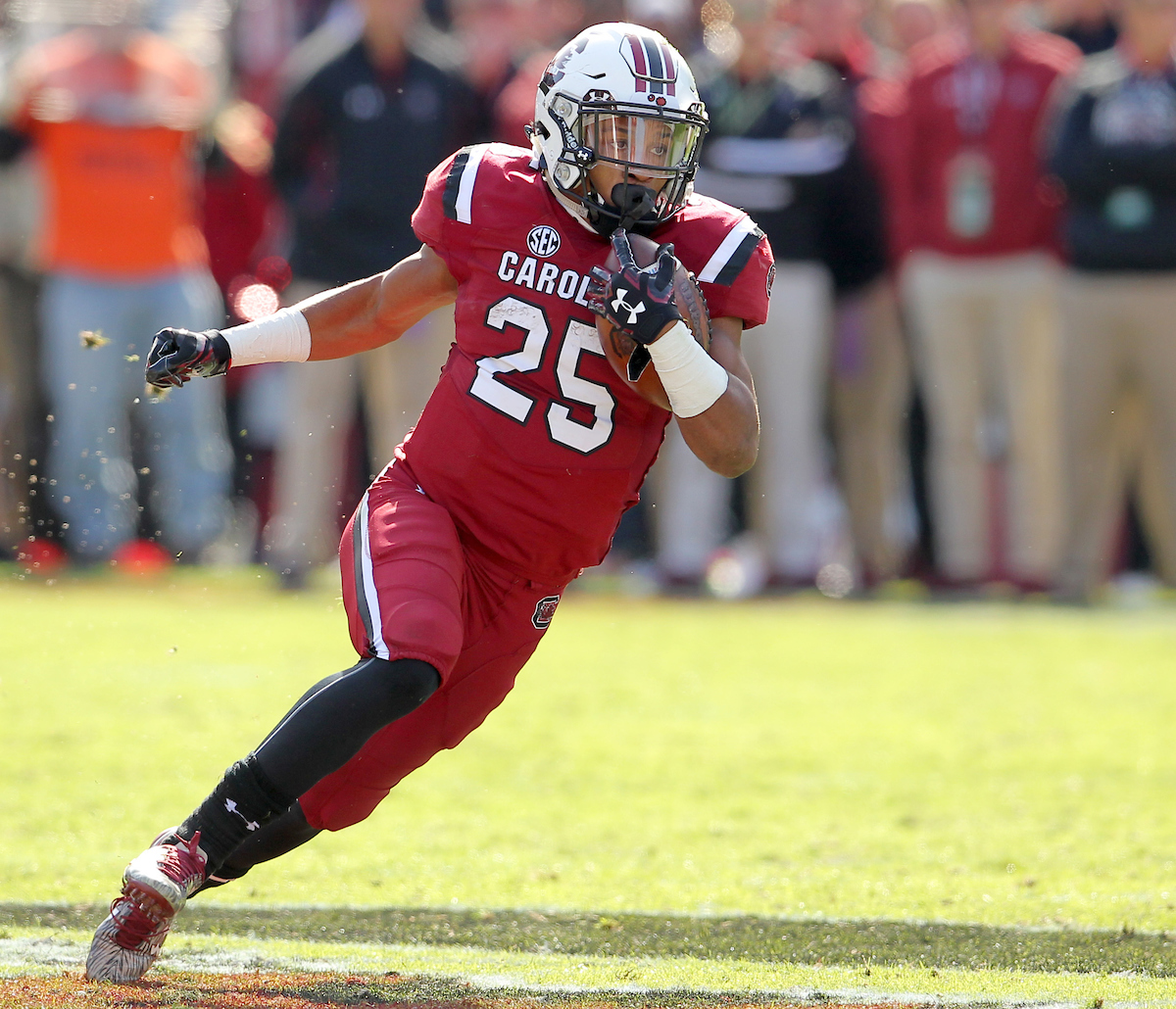 South Carolina’s best performances came on the defensive side of the football, though.

Courtesy of the University of South Carolina’s athletics communications office, here are the official stats from Saturday’s game …

Muschamp’s team will go for its eighth win of the season next week against the Wofford Terriers of the Southern Conference.  Wofford, an FCS team, is 9-1 and clinched its conference title on Saturday with a road win over VMI.