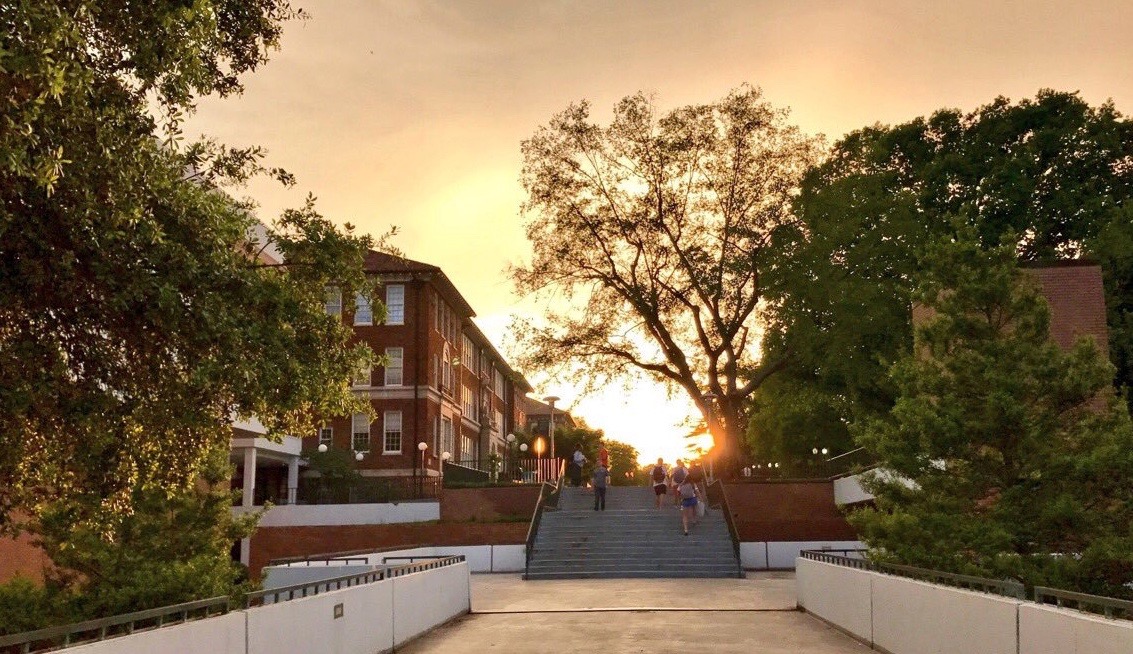 We honestly don’t know what’s happening at Clemson University lately.  The school has gone completely off the deep end when it comes to political correctness and the embrace of rabidly leftist ideology.

Thankfully a few of South Carolina’s elected officials are standing up to the madness (most notably Senator Katrina Shealy), but the institution seems to be hopelessly lost of late.

Last month, Bart Knijnenburg – an assistant professor of human-centered computing at Clemson – wrote on his Facebook wall that “all (T)rump supporters, nay, all Republicans, are racist scum.”

Knijnenburg also endorsed the far left’s call for violence in the name of eradicating this “Republican” racism.

As we noted in our coverage of the Knijnenburg dust-up, Clemson has been a breeding ground for leftist insanity in recent years.  Last year the school booted a man from its campus for praying.  Prior to that, there was a major dust-up between a liberal professor and the school’s football coach, Dabo Swinney, over the latter making positive references to slain civil rights leader Martin Luther King, Jr.

That’s right … Swinney got in trouble for praising King’s legacy.

Oh and who can forget the infamous “Banana Bandit.” Or the school’s “Taco Tuesday” fiasco.

One of the leading liberal agitators on campus?  Student body vice president Jaren Stewart – who is reportedly preparing to launch his candidacy for the top post in student government.

A native of San Diego, Stewart has been involved in a number of incidents on campus – including a “sit-in” protest during the saying of the pledge of allegiance at a recent student government meeting.  According to Stewart, he and his fellow protesters sat and remained silent during the pledge as a way of drawing attention to the “catastrophic air of racism” at the school. 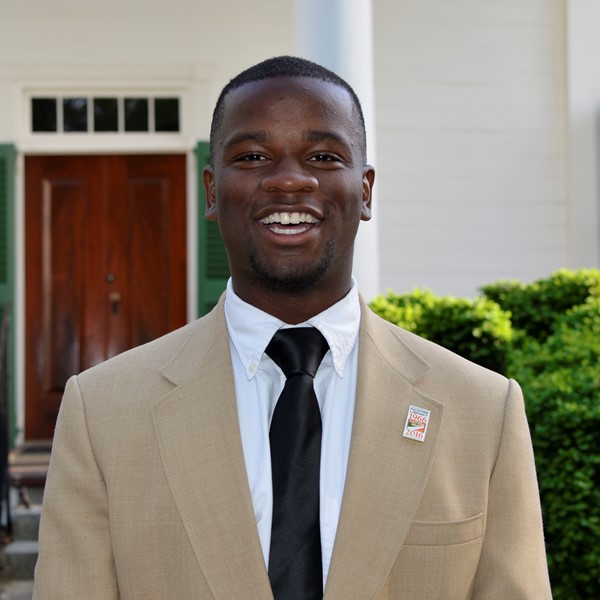 “The social exclusion and isolation is very real and very damaging to students here,” Stewart told The (Anderson, S.C.) Independent-Mail.  “We understand the motif that there’s a Clemson family – and it doesn’t include everyone.”

Join us for the senate session of Monday, September 25th. https://t.co/wOYzKyVPKi

We understand Clemson’s uncomfortable past, but its present is nothing short of full-blown PC insanity.

In fact, one letter writer recently wrote to this news site accusing the school of “fostering dependent children rather than encouraging personal growth learned through experiences outside the students’ normal comfort zones.”

Anyway, Stewart might want to reconsider his candidacy in the aftermath of allegations leveled against him in his capacity as a student government leader (and as a resident assistant on campus). 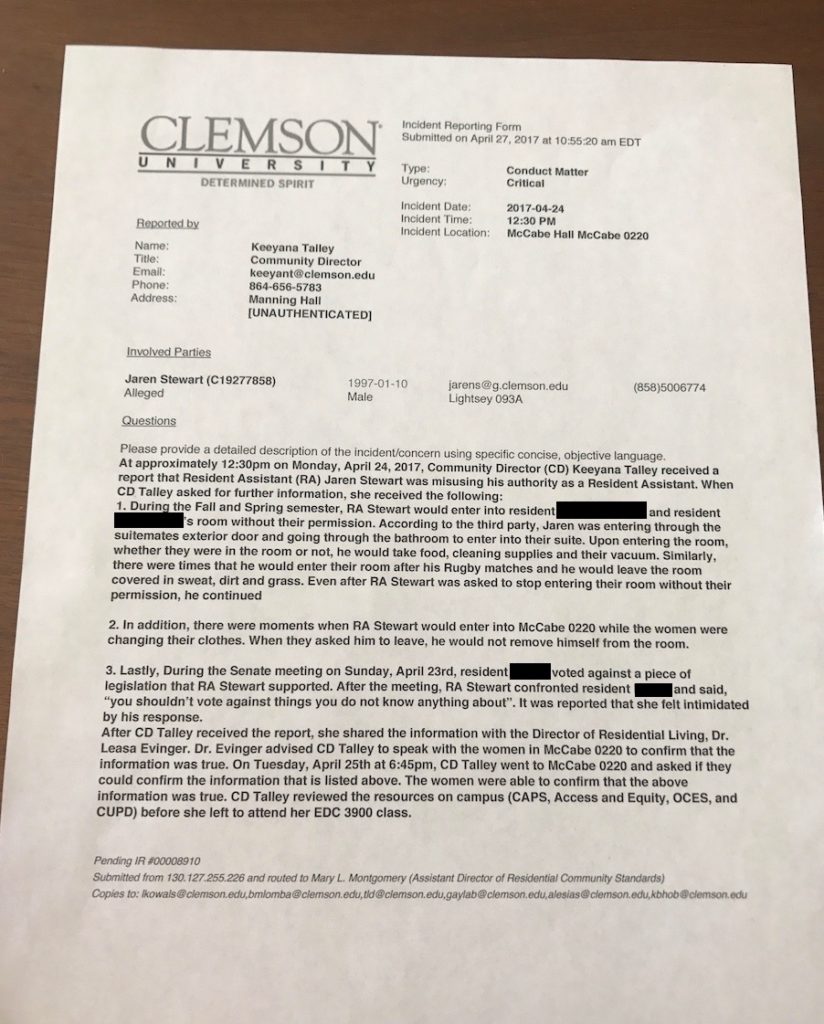 According to this document, dated April 27 of this year, Stewart not only threatened fellow members of student government who voted in a manner that displeased him – he also entered into the rooms of female students without permission and absconded with their possessions.

Additionally, the document stated that “there were moments when RA Stewart would enter into (the room) while the women were changing their clothes.  When they asked him to leave, he would not remove himself from the room.”

The incident reporting form – submitted by Clemson community director Keeyana Talley – referred to the conduct matter involving Stewart as “critical,” and noted that the individuals referenced within the report confirmed the accuracy of the allegations contained therein.

It’s not immediately clear whether Stewart was removed from his role as a resident assistant following these allegations, which were made known to multiple Clemson bureaucrats including the school’s director of residential living (Leasa Evinger), director of housing and dining (Kathy Hobgood) and director of community and ethical standards (Alesia Smith).

It appears as though he was, but the school has not issued any sort of notification or warning related to his alleged conduct.

Clearly Stewart has not forfeited his role on student government … nor restrained his ambitions to become Clemson’s next student body president.

Obviously there are multiple sides to every story, and supporters of Stewart rushed to his defense in the aftermath of the allegations against him.

One of Stewart’s defenders, Clemson student Jonathan Larkin, wrote an open letter on April 29 expressing dissatisfaction with “how quickly (Stewart) was removed” from his role as resident assistant.

“I will admit that I am not fully aware of what he is being accused of, but I will firmly stand behind him in support that he did not do it,” Larkin wrote. “I have never seen him do anything that could possibly get him fired, and I cannot even begin to imagine what he is accused of.”

Larkin added that Stewart was “not capable of doing anything that would jeopardize my high standing opinion of him.”

At minimum, it seems clear to us Clemson’s administration – which is always looking for “teachable moments” in the culture war currently being waged by the far left – failed to properly address this incident.  At worst, it covered up serious allegations which – if true – should have led to the immediate expulsion of the student in question.

US Marshal Named For South Carolina