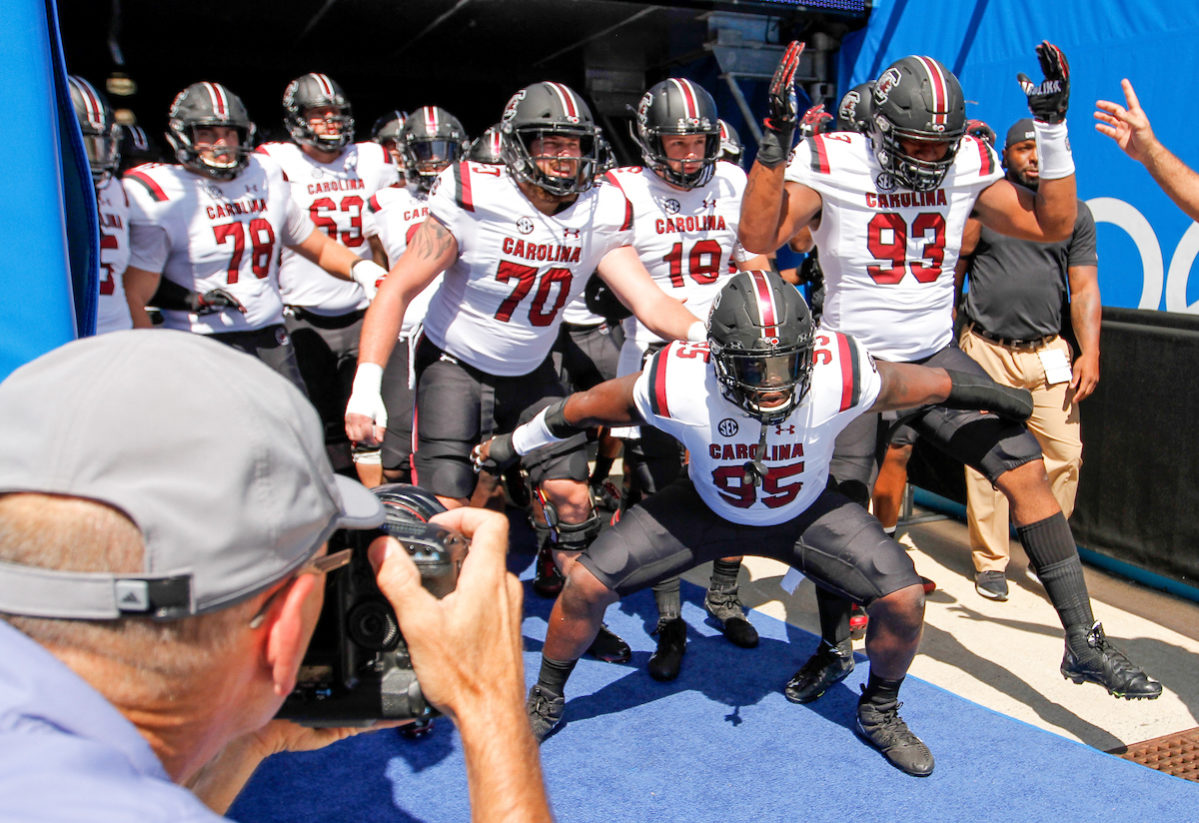 In case you missed our Week 1 #FITSPicks, we had an absolute blast with the new format …

In the inaugural installment of this new feature, our panel of experts offered up predictions for both of the Palmetto State’s in-state, season-opening matchups as well as three of the best Top 25 tilts on tap.

This week we welcome two new gridiron soothsayers to the fold – our intrepid and drop dead gorgeous ex-columnist Liz Reardon (welcome back Liz!) and the author of our favorite college football Twitter account, Woody Whitehurst.

Liz is a Columbia, S.C. marketing professional and die-hard University of South Carolina Gamecock fan, while Woody – as his twitter bio explains – is a “dynamic combination of Clemson’s most athletic and chill QBs all in one neat package.”

These two guest pickers join our founding editor Will Folks and Pee Dee prognosticator Brant Branham in picking games this week … and who knows, hopefully we can talk them into coming back and playing again next week.

Also a shoutout to our Big 10 brother, Martin Steinborn, who will hopefully be able to join us again for next week’s picks!

To the Week 2 matchups … 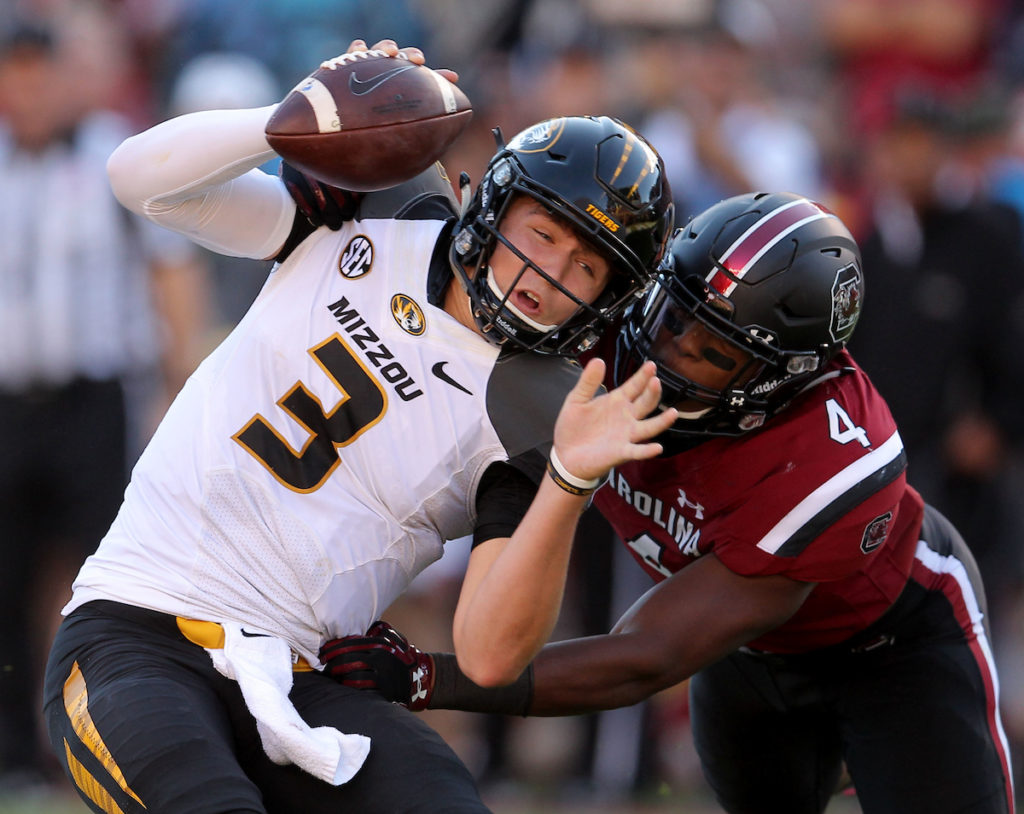 Always seems like the further a team travels the poorer they play.  Of course the Tigers looked BAD on defense last week.  Mizzou claims to be the “show me” state, but they haven’t shown me nearly enough to pick them over an improving Gamecocks team.  I’ll take the team from Columbia – Columbia, S.C. that is.

I honestly think this game is a toss up, but there is no way I would EVER bet against my Gamecocks. Our defense is still struggling, but Jake Bentley and Deebo Samuels get it done on offense and bring home the Cup!

I was actually really impressed with South Carolina and quarterback Jake Bentley last week, but we all know what happened the last time this team took the field against Tigers …

South Carolina gets another special teams touchdown in this game and hangs on down the stretch as its defense manages a stop or two in the fourth quarter.  At least that’s what I hope happens.  This is the second straight must-win game for Will Muschamp, and I think he gets it. 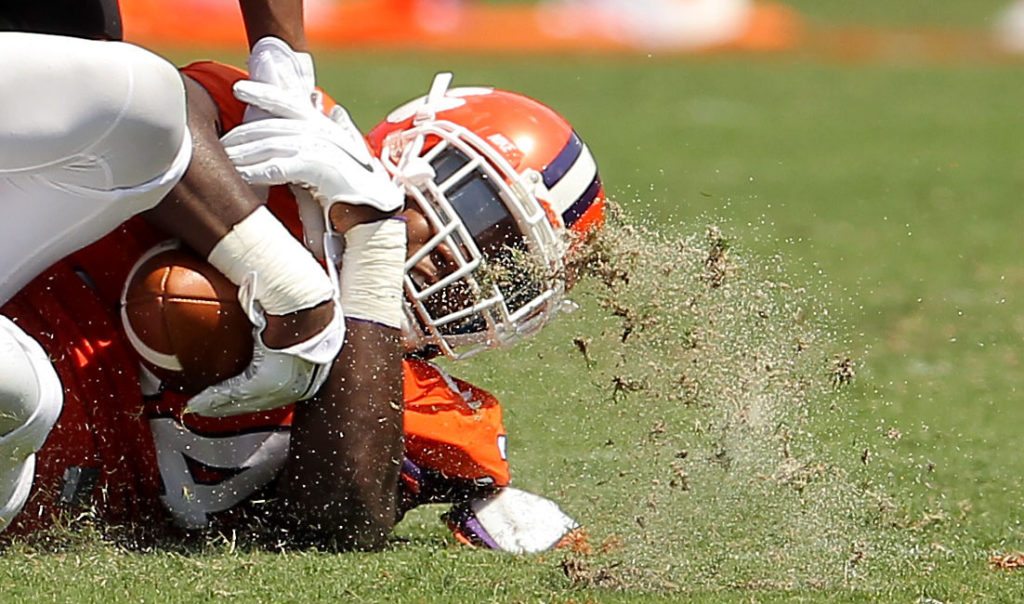 Clemson has won the last three in this series – which dates back to 1899.  I see the big battle here being whether Clemson’s defensive line – with future NFL’ers Christian Wilkins and Dexter Lawrence and stop a big (235 pounds) and fast Kamryn Pettway who should be fresh and hungry after missing last week’s game due to suspension.  I think Kelly Bryant outplays Jarrett Stidham at quarterback and seeing as Clemson has won 17 straight in the month of September, I’ll take the Tigers (the ones from Clemson) here.

Maybe it’s wishful thinking, but I predict it’s going to be a close one.  Clemson probably has the edge just by being at home.  And unfortunately, I think they find a way to win.  But there is no way I would EVER bet on Clemson, so I’ll take Auburn and the points.

Just a couple of agriculture schools with pretty good football programs.  It’s hard to beat Clemson at home and Auburn is just so damn jealous of that lake.

Kamryn Pettway isn’t Bo Jackson, but he led the Southeastern Conference in yards per game last year and his size and speed at the running back position will give Clemson’s vaunted defense a true test.  Clemson has Brent Venables, though, as well as sufficient talent and depth on defense to pull out a close one. 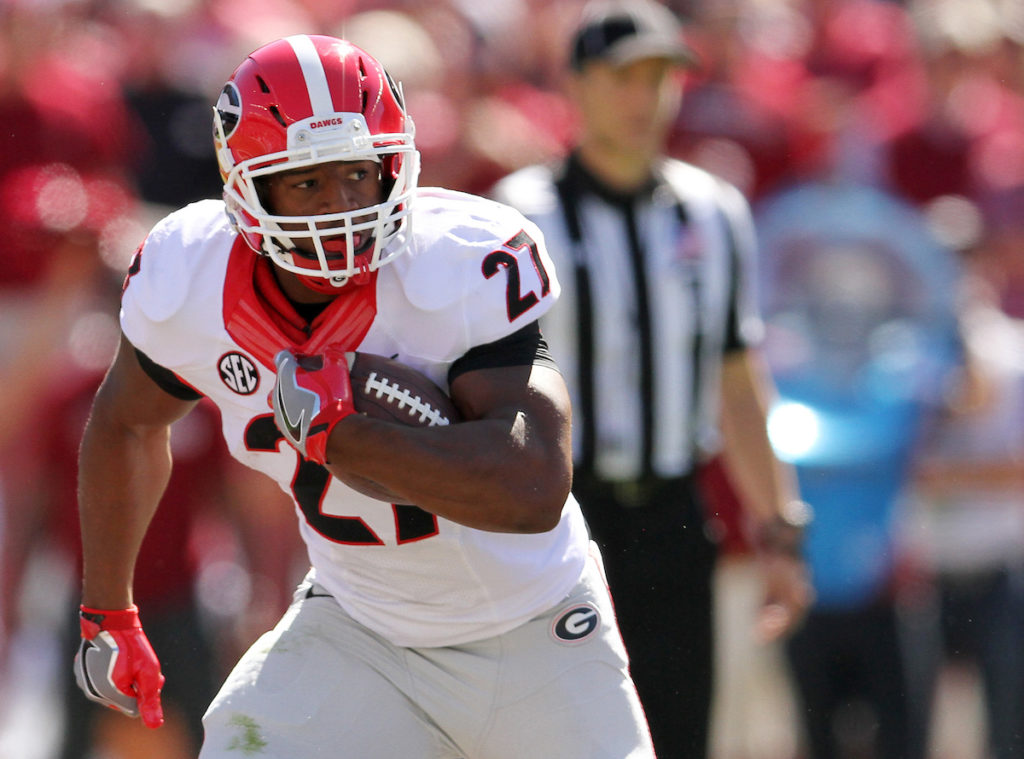 Should be a good battle between Notre Dame’s strong offensive line and the Dawgs’ good D-line. I think Georgia’s new QB can handle the South Bend atmosphere.  Probably not going to be a lot of TD’s, with all due respect to Touchdown Jesus.  Take the Dawgs to win straight up.

If there was a way for both of these teams to lose today -that would be my ideal scenario. I have no love lost for either program, I think Georgia’s defense is too much for the always overhyped Irish. It should be close.

If there’s one thing that brings Gamecocks and Tigers together, it’s our disdain for Georgia fans. Wish they could lose by 100 points, but 3 is good enough to do the job.

Georgia is without star quarterback Jacob Eason but I think backup Jake Fromm (who has the best Twitter handle in college football) performs capably in his stead.  Also, Notre Dame is always overrated.  The Dawgs pull away in the second half to win this one comfortably. 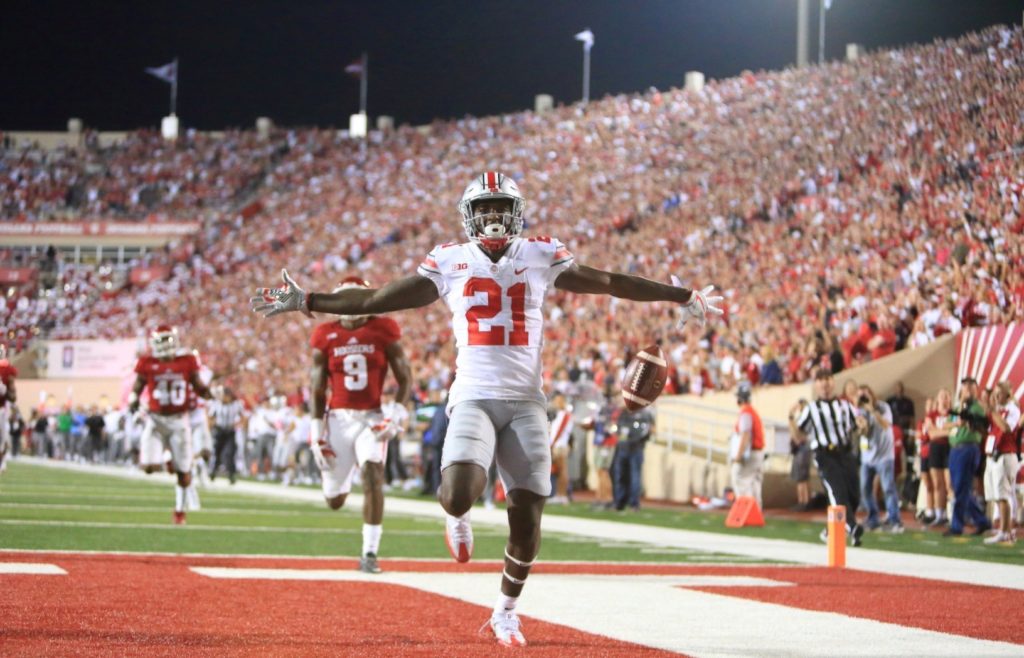 Lotsa peeps talking about the two quarterbacks Baker Mayfield and J.T. Barrett, but I see this as a matter of who wins at the line of scrimmage.  The Sooners return all five offensive line starters and Buckeye’s D-Line is loaded with talent.  Take the points but the Buckeyes win straight up.

I despise Ohio State and Urban Meyer – but 7.5 points is a lot for a team who struggled early on against Indiana.  I think it’s closer than that, but OSU squeaks out a win.

My general hatred of 10th year senior Baker Mayfield makes this hard, but Oklahoma has what it takes to outscore the Buckeyes.  Have your Urban Meyer sad pizza meme ready.

Urban Meyer spent the week bitching about Texas’ coach Tom Herman.  Talk about an unnecessary distraction.  Wasn’t Baker Mayfield the quarterback that pop star Katy Perry had a crush on a few years back?  No?  That was Trevor Knight, wasn’t it?  Either way the Sooners stun the Buckeyes on the final play of the game in a shootout at the Shoe. WWKPD?  Pick OU. 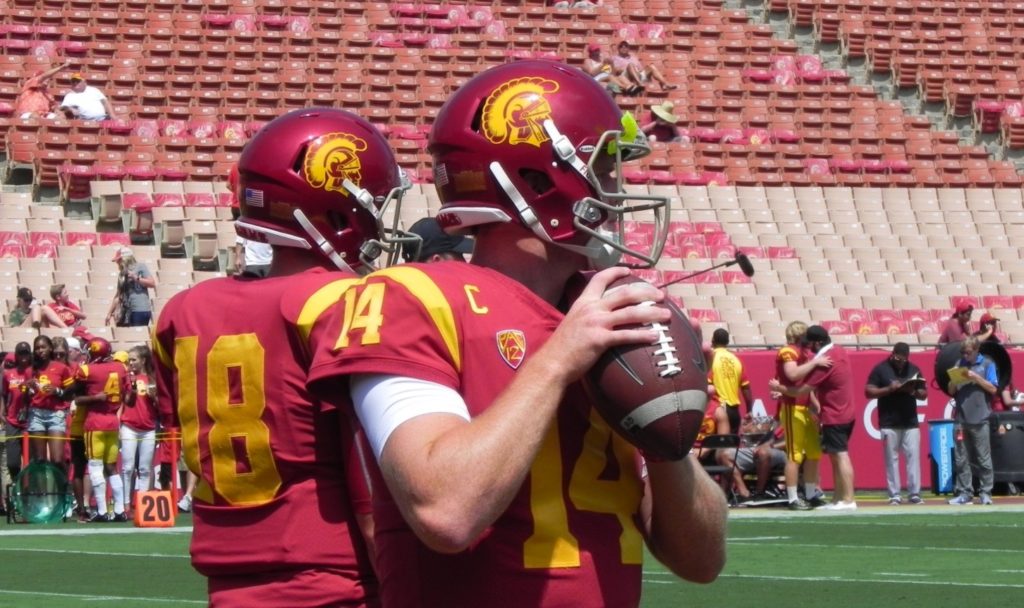 The Cardinal has won the last three against the men from Troy, but I see Southern Cal quarterback Sam Darnold bouncing back after a slow start in week one.  Southern Cal wins going away, with a long trip back to the farm from Tinsel Town for Stanford.

This is a road game for the underdog Stanford, but I’m still taking them in what could be a shootout. The line moved a solid 5 points this week in their favor. Hmm.

Is the real USC finally back? Maybe, but Stanford head coach David Shaw is pals with Dabo Swinney and that’s a good enough reason to pick them in my book.

I watched the ESPN 30-for-3o on Southern Cal the other day and it reminded me why I hate them.  Oh, and O.J.  And Lane Kiffin.  Still, I think the “real USC” is back, unfortunately, and I think they prove it at home against a quality Stanford team.