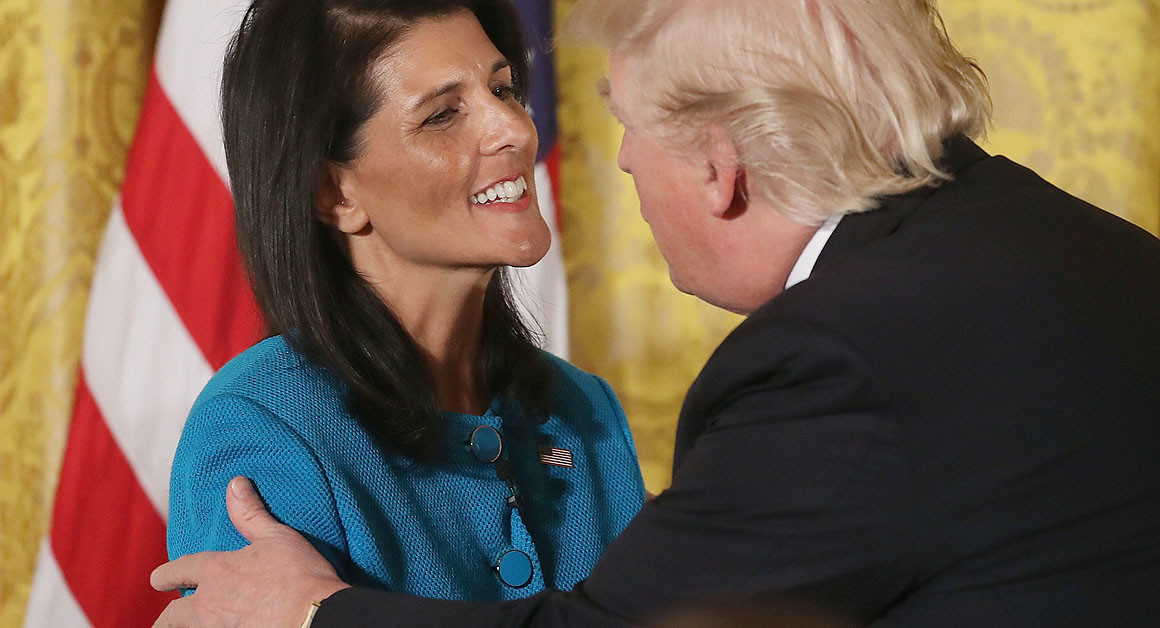 DID WE MISS APRIL FOOL’S DAY?

U.S. ambassador to the United Nations Nikki Haley claims she was offered the job of secretary of state by Donald Trump – but turned him down.

That’s according to the latest fawning profile of Haley in the national news media … which continues to lap up her fact-challenged improvisation in office (an extension of the failed #NeverTrump foreign policy embraced by the 2016 GOP establishment).

“Two sources familiar with the conversation” told Politico Haley was offered the top diplomatic post in Trump’s administration on November 17, but that she “turned (Trump) down … telling the president-elect that she lacked the requisite foreign policy experience for the job.”

The Politico story touts Haley as “the country’s leading voice on foreign affairs” as well as “a future presidential candidate.”

Oh, it also regurgitates her famous quote about using her high heels as weaponry …

“I wear heels, and it’s not for a fashion statement,” Haley said. “It’s because if I see something wrong, we’re gonna kick ‘em every time.”

The White House denied Haley’s claim, but at this point who the hell knows what the administration is doing when it comes to the former South Carolina governor –  a founding member of the #NeverTrump fraternity who is basically freewheeling in her new post.

Earlier this year we blistered Haley for making demonstrably ignorant and inaccurate comments regarding Russia (criticism which was later picked up in even harsher terms by Ron Paul’s institute).

Bottom line?  Haley is spinning the same tired old interventionist rhetoric that was advanced by the administration of former president Barack Obama – rhetoric we were led to believe was not shared by the man who appointed her to this position.

In fact, we were under the assumption Haley was appointed solely as a political favor to Henry McMaster – the scandal-scarred former lieutenant governor who ascended to the state’s chief executive office upon Haley’s confirmation as UN ambassador.

Another interesting component of the Politico story about Haley?  It features numerous fawning quotes from unnamed officials from the administration of former president George W. Bush.

Last time we checked, the Bushes were supposed to have been done with Haley after she allegedly lied to their faces about her endorsement intentions during the 2016 “First in the South” presidential primary – which wound up being the final nail in the coffin of former Florida governor Jeb Bush‘s presidential bid.

Oh well … guess not everybody got the memo.