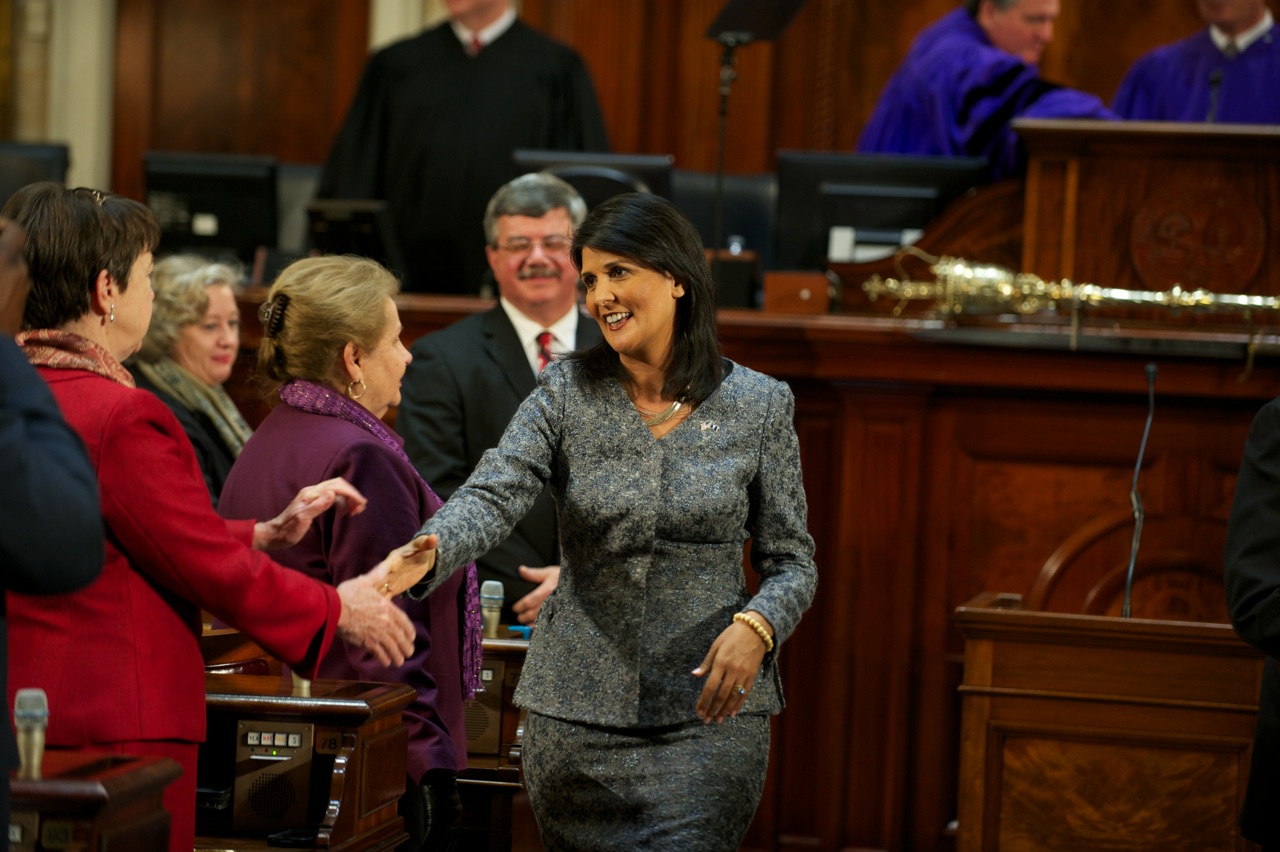 America’s ambassador to the United Nations took a break from her, um,
“current responsibilities” to weigh in on a mushrooming scandal back in her home state.

Nikki Haley – who was governor of South Carolina from 2011-2017 – blasted the Palmetto political consulting firm of Richard Quinn and Associates (RQA) and its longtime associate, Bob McAlister.

Quinn, a neo-Confederate “Republican” who advises numerous politicians and government agencies, appears to be the primary focus of an ongoing investigation into corruption at the S.C. State House.  Just last week he was named in a three-count indictment of veteran S.C. Senator John Courson.

Prior to that, Quinn was reportedly summoned to appear before a statewide grand jury convened by special prosecutor David Pascoe.

Also Quinn and his son – S.C. Rep. Rick Quinn – were named in the pages of the S.C. State Law Enforcement Division (SLED) report that kicked off the investigation.

In 2010, Richard Quinn and McAlister were working for the campaign of then-S.C. attorney general Henry McMaster – who finished in third place in that race.  This year, McMaster followed Haley into the governor’s office thanks to an appointment the latter received from U.S. president Donald Trump.

McMaster endorsed Haley in a 2010 GOP runoff election, and the two were generally believed (with a few exceptions) to be on good terms.  Haley even agreed to appear in a video for McMaster shortly after he took office.

“In 2010 I experienced the wrath of RQA and McAlister,” Haley tweeted shortly after midnight on Wednesday morning. “SC consultants will do everything to maintain control and keep the money flowing.”

In 2010 I experienced the wrath of RQA and McAlister. SC consultants will do Everything to maintain control and keep the money flowing.

“She never misses an opportunity to cast a stone,” one lawmaker who worked with Haley told us.

That’s true … although based on Haley’s own scandal-scarred history in South Carolina, she’d probably be wise to remain silent.

Is Haley’s righteous indignation warranted?  Yes and no …

Far be it from us to quibble with her basic premise, but she’s certainly reaching when it comes to this particular (belated) bit of criticism.  In addition to receiving McMaster’s 2010 endorsement, Haley hired two of his closest advisors – Trey Walker and Rob Godfrey – to serve in her administration.

“This is revisionist history,” one GOP source told us.  “She hated RQA so much she hired all of their staff.”

Indeed.  Also last time we checked, most of the “wrath” Haley received in 2010 came courtesy of the consulting empire of Warren Tompkins – who was advising the gubernatorial candidacy of former U.S. Rep. Gresham Barrett.

So … what prompted Haley’s tweet?  According to our sources, the former governor is livid that McMaster is planning on removing one of her longtime friends – Mike Sisk – from the board of the S.C. State Ports Authority (SCSPA).

Sisk and his wife are close friends with Haley.  In fact they recently visited her in New York City.