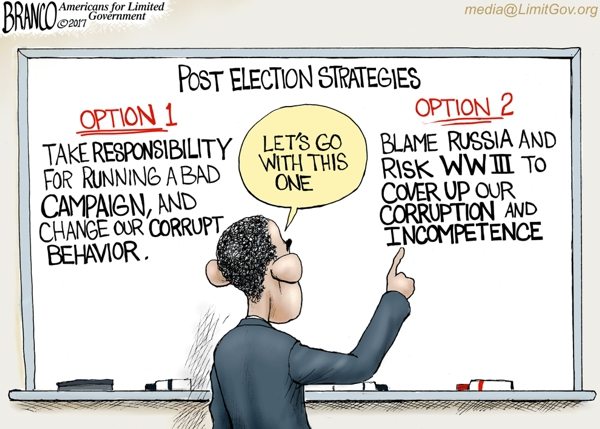 We’ve featured his stuff before, but cartoonist A.F. Branco (Twitter) is one of our favorite political artists.  He’s one of those guys who defines the old expression “a picture says a thousand words.”

We’ve written thousands of words on the recent “Russian Hacking” story (and the more diabolical “Fake News” attack associated with it).  And will probably write even more on it in the weeks to come.

For those of you unfamiliar with his work, Branco’s cartoons appear frequently on NetRightDaily, which is one of our favorite sites for the latest limited government news coming out of Washington, D.C.  Not only do we love this website’s content, if you are starting your own political blog (or news website), NetRightDaily allows publishers to “cross-post” its articles and cartoons for free.

That’s a great resource for aspiring publishers – not to mention an innovative way of expanding one’s reach into the broader marketplace of ideas.

Sick of “Fake News” from the increasingly-liberal, bought-and-paid-for mainstream media?

Don’t be … you’ve got options.

As 2017 – a pivotal year in American politics – begins to unfold next week with the inauguration of U.S. president-elect Donald Trump, we urge our readers to tune into NetRightDaily to keep tabs on everything that’s happening in our nation’s capital from a decidedly pro-taxpayer, pro-liberty perspective.