Ten days ago we published a story in which sources close to the S.C. Supreme Court advised us that a ruling was imminent in the high-stakes legal battle between S.C. attorney general Alan Wilson and first circuit solicitor David Pascoe.

Our sources based this contention on the fact that the high court had yet to set a date for oral arguments in the case – which hinges around Wilson’s authority to remove Pascoe as special prosecutor in charge of investigating allegations of public corruption at the S.C. State House.

Wilson has twice recused himself from this ongoing probe – and twice appointed Pascoe as his “designee.”

In the first instance, Pascoe stood in Wilson’s shoes and successfully prosecuted former S.C. Speaker of the House Bobby Harrell – resulting in the powerful politician stepping down from his lofty office and pleading guilty to six ethics charges.

In the second case, Pascoe – with the backing of the S.C. State Law Enforcement Division (SLED) and S.C. circuit court judge Clifton Newman – was in the process of convening a grand jury to issue indictments against other politicians.

Then all hell broke loose … 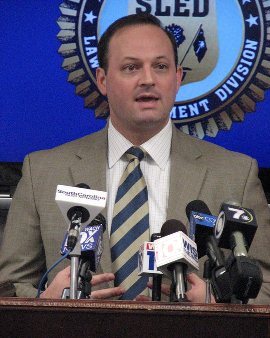 After blocking the empaneling of a grand jury, Wilson fired Pascoe and attempted to replace him with a different prosecutor (one who declined to take the job).  His office then clumsy attempted to politicize the case – while Wilson angrily (and baselessly) attacked Pascoe’s integrity.

What prompted such a desperate gambit?

Most believe Wilson is acting in the interests of powerful S.C. Rep. Rick Quinn and his the father, influential “Republican” neo-Confederate consultant Richard Quinn.  Both Quinns were mentioned in redacted sections of a 2013 SLED investigative report into State House corruption – a report that many believe served as the basis for the ongoing investigation.

However it took more than two years for this information to become public.

As we’ve previously noted, the law in this case, Wilson’s own intent in recusing himself and the total lack of justification for his allegations that Pascoe’s probe is somehow “tainted” should make this case a no-brainer.  In fact we saw nothing in either Pascoe or Wilson’s pleadings before the court to indicate any different possible conclusion.

If anything, those pleadings made it abundantly clear Wilson’s office has been obstructing this investigation for months.

Hopes for swift justice are fading, though …

When the court didn’t move quickly to schedule oral arguments in the case, most believed a verdict based on the submitted pleadings was forthcoming … which hopefully it is (sooner rather than later).

However there are some troubling whispers coming out of Columbia … whispers we certainly hope are unfounded, but which we will not hesitate to sink our teeth into in the event justice remains elusive in this matter.

Given the high profile and huge stakes associated with this case, the court has absolutely no reason – and no excuse – to drag its feet in issuing an opinion.  In fact, every day the justices delay their decision, public faith in the integrity of the process evaporates further.

That’s wrong no matter where you live … but it is especially unfortunate in South Carolina, a state where the transgressions of those in power are routinely ignored or whitewashed.

It has been forty days since Pascoe took his case to the Supreme Court – asking the justices to override Wilson’s politically-motivated obstructionism and let his investigation proceed.

The court needs to do that … now.