S.C. ATTORNEY GENERAL HAS BEEN MEDDLING IN ANTI-CORRUPTION INVESTIGATION FOR MONTHS ON BEHALF OF HIS POLITICAL CRONIES

Ongoing obstruction of justice, anyone?  That’s certainly what it looks like …

It’s no secret S.C. attorney general Alan Wilson‘s office has gone out of its way (albeit clumsily) over the past few weeks to short-circuit a public corruption probe into his cronies – notably S.C. Rep. Rick Quinn and the powerful lawmaker’s father, influential “Republican” neo-Confederate consultant Richard Quinn.

Hell, Wilson has pretty much ruined his political career to endeavoring to protect them …

According to documents filed before the S.C. Supreme Court, though, this obstruction has apparently been going on for months.

Take a look at this September 2015 letter to Wilson’s office by S.C. first circuit solicitor David Pascoe, who was assigned by Wilson last summer to handle the case after the attorney general recused himself citing undisclosed conflicts of interest. 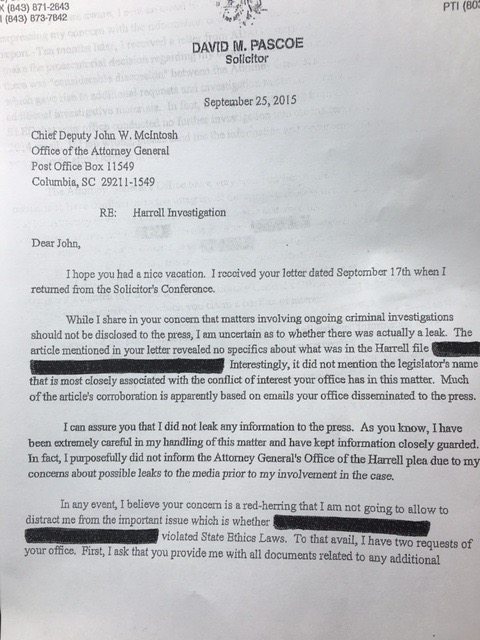 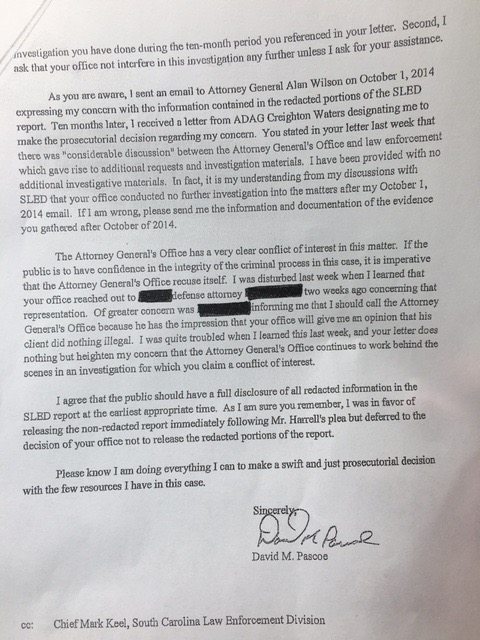 This letter clearly documents an ongoing pattern of obstruction on the part of the attorney general ostensibly on behalf of the Quinns – both of whom were named in a preliminary December 2013 investigative report prepared by the S.C. State Law Enforcement Division (SLED).

“I ask that your office not interfere in this investigation any further unless I ask for your assistance,” Pascoe wrote in the letter, which was addressed to deputy attorney general John McIntosh.

The letter goes on to note that Wilson’s office “has a very clear conflict of interest in this matter,” and that “if the public is to have confidence in the integrity of the criminal process in this case, it is imperative that the Attorney General’s Office recuse itself.”

Pascoe goes on to note that recent actions by Wilson’s subordinates “heighten my concern that the Attorney General’s Office continues to work behind the scenes in an investigation for which you claim a conflict of interest.”

Among those actions?  A defense attorney for one of the suspects is alleged to have received improper contact from Wilson’s office.  This lawyer later indicated to Pascoe that he should discuss his client’s case with the attorney general because Wilson’s office was going to issue an opinion absolving the lawmaker of all culpability.

(This of course happened in December 2015 – as exclusively reported here).

A decision by the S.C. Supreme Court is expected soon regarding this ongoing battle.  The court’s ruling will either allow Pascoe’s investigation to proceed – or enable Wilson to appoint another special prosecutor (something he attempted to do two weeks ago).

For the sake of the integrity of the process, let’s hope Pascoe wins his case.

“The probe” was exclusively uncovered by this website back in September 2014.  The following month, it claimed former S.C. Speaker of the House Bobby Harrell – who pleaded guilty to six ethics-related counts, resigned his office and got three years of probation in connection with the case.

Now, Wilson is obstructing Pascoe’s attempt to empanel a grand jury and issue additional indictments in the case – even though Pascoe’s efforts have been endorsed by the head of SLED and the circuit court judge overseeing the case.

Why?  Because it’s obvious his cronies are in trouble …