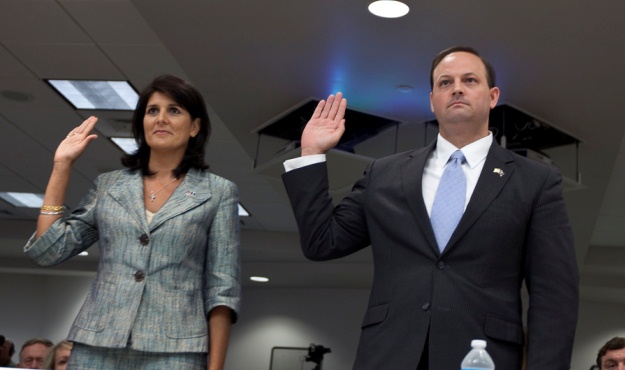 To say S.C. attorney general Alan Wilson had a bad week would be an understatement.

He had the absolute worst week we’ve ever seen in Palmetto politics … going from a likely 2018 gubernatorial frontrunner to a man whose political future is badly (and perhaps irreparably) damaged.

Seriously … without overstating things, Wilson could have spontaneously combusted on Easter Sunday and had a better week than the one he wound up having.

On Monday, Wilson was busted attempting to obstruct an investigation into corruption at the S.C. State House (one that appeared to be closing in on some of his closest neo-Confederates).  Angry at getting exposed, Wilson proceeded to fire the prosecutor he had appointed to handle the case – S.C. first circuit solicitor David Pascoe.

And yes, all these Nixonian machinations came from a man who previously recused himself from the investigation due to conflicts which he never disclosed.

On Tuesday, Wilson attempted to appoint a new prosecutor to the case – only to be told “no dice” by the individual he tried to appoint.  That prosecutor proceeded to compound Wilson’s problems by publicly questioning the attorney general’s authority to un-recuse himself from the probe in the first place.

On Wednesday, the implosion reached its crescendo.

That afternoon, Wilson held an angry, ill-advised press conference in which he attempted to smear Pascoe as a “tainted” prosecutor – without offering so much as a shred of evidence to support his allegation.  In the process, he attacked the media, bloggers and other political opponents – coming off as positively unhinged at times.

“Jay was not impressed,” one GOP legislative leader told us.

Other “Republican” lawmakers echoed that sentiment.

“I think the only people in the General Assembly who support what he’s doing are the ones he’s trying to keep from getting indicted,” one lawmaker told us bluntly.

Finally today, Friday, Wilson’s ongoing attempts to politicize the scandal were exposed by The (Charleston, S.C.) Post and Courier – which reported on his efforts to personally sway S.C. Republican Party chairman Matt Moore to get involved.

Moore merely stated that Wilson “asked for patience and prayers in dealing with this difficult situation,” but we’re told he and his allies repeatedly tried to get Moore and other party officials to engage in the fray on his behalf – hoping to turn the issue into a partisan fight (Pascoe is a Democratic prosecutor).

Oh, and in other news – we published this article about how the law in this case is not on Wilson’s side.

So .. did anything go right for Wilson this week?

Well, The Nerve – a website which built its reputation on fighting for “ethics in government” – remained largely silent in response to Wilson’s implosion.  Meanwhile WIS TV 10 (NBC – Columbia, S.C.) – the station where Wilson’s wife used to work as a news reporter – did its best to keep the attorney general’s bad news off of its front page.

That is, until the station got called out … 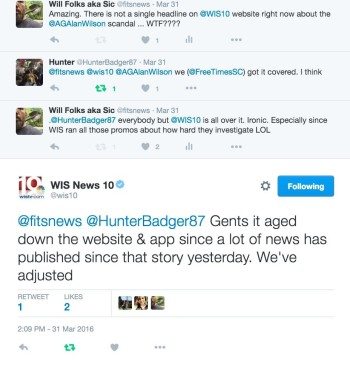 Sources tell us Wilson and his allies held a “planning meeting” late this week to determine how they were going to “take the fight to Pascoe” in the coming week.  Perhaps not coincidentally, around midday Friday this website received a salacious news tip regarding Pascoe’s personal life – one seeking to paint the prosecutor in a negative light as a result of an alleged extramarital affair.

We’re investigating the allegation in an effort to determine its veracity … however the timing of the leak reeks of self-preservation on the part of Wilson’s allies (assuming they are indeed behind it).  Furthermore, even if Pascoe did have an extramarital affair – how on earth would that impact his ability to discharge his professional duties?

Frankly, the whole sordid affair strikes us as additional evidence that Alan Wilson, the lawmakers he’s attempting to protect and the political empire that’s struggling to prop him up have found themselves more squarely on the ropes than we originally suspected.

Which is a good thing.

Wilson sold the state on being a crusader against public corruption – but now he’s been completely unmasked as a corrupt politician himself.  In other words we hope he has plenty more “worst weeks ever” until he either resigns or is removed from office.