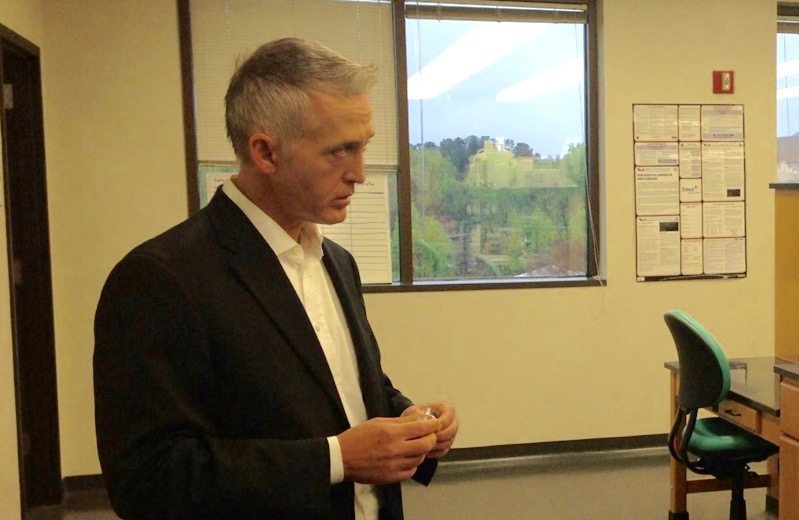 He was the man to beat … then he was browbeaten out of contention (and rightfully so).

Now U.S. Rep. Trey Gowdy is once again back in the conversation for a seat on the S.C. Supreme Court.  In fact “Republican” leaders in the state’s General Assembly find themselves working overtime (for a second time) to convince Gowdy to run for chief justice – a position that wields near dictatorial powers over the Palmetto State’s judicial branch of government.

Judges and justices in South Carolina are elected by lawmakers – an infinitely corrupt process.  The seat some want Gowdy to fill will be voted on in May of this year.

Gowdy’s name was floated by legislative leaders last year – part of a “judicial branch reform” proposal – but his surprise endorsement of status quo “Republican” presidential candidate Marco Rubio of Florida enraged many lawmakers (especially after Gowdy had made his view on endorsements perfectly clear).

So the idea was nixed …

What got him back in the game?

Well, while the rest of the state was completely absorbed by the “First in the South” presidential primary – and while this website was getting hacked to pieces by cyberterrorists – S.C. Supreme court justice John Kittredge quietly announced that he would not challenge fellow justice Donald Beatty for the top spot on the court.

Anyway, we broke the story late Friday … but due to the cyberattack against us, hardly anybody saw it.

Certainly nobody saw it coming …

Why did Kittredge decide against running?  According to our sources, he feared that a head-to-head battle against Beatty for the chief justice’s seat would result in him being labeled a “bigot.”  Specifically, he was said to be extremely worried about inquiries being made by liberal “news columnist” John Monk of The (Columbia, S.C.) State newspaper.

“So he surrendered to political correctness,” one disappointed lawmaker told us.

Beatty – a black liberal Democrat elected in 2007 – has one year of seniority on Kittredge, a white “Republican” who is viewed as the most conservative member of the court.  Lawmakers typically give the chief justice position to the most senior member of the court, but they are under immense pressured during an election year to name a conservative to the post.

Why did a “Republican-controlled” General Assembly put a liberal Democrat on the bench in the first place?

Ironically, Beatty’s tenure on the court should have ended in 2015 with an appointment to the federal bench.  In fact he was being vetted by the White House for just such a post, but as we reported last summer his nomination was blocked by U.S. Senator Tim Scott.

Earlier this year, the administration of Barack Obama pulled its “compromise candidate” for the seat – signaling that Beatty’s name might be back in play.  But then U.S. chief justice Antonin Scalia died, setting off a stalemate over judicial appointments that appears to have scuttled any chance of his nomination (or any nomination) being approved.

With no way to pawn Beatty off on the federal courts, lawmakers were faced with a difficult political decision: Give him the chief justice seat and face the ire of GOP voters?  Or elect Kittredge to the position and face allegations of discriminating against a black judge?

The decision was made to go with Kittredge … until he punked out last Friday.

Now lawmakers are scrambling to find a candidate they can put up for the seat, which is being vacated by current chief justice Costa Pleicones at the end of the year.

Will Gowdy be their candidate?

Several lawmakers remain livid at Gowdy over his endorsement of Rubio, but they also find themselves in a bind.  They need a big name to offer up as an excuse for scrapping seniority in naming the next chief justice.

“I think defeating Beatty trumps the Rubio endorsement,” one legislative leader told us.

Awarding the position to Gowdy provides them with a big name – and lets them make the argument that they bypassed the entire court (not just Beatty) in order to appoint a fresh faced “outsider,” one capable of cleaning up the corrupt judicial branch.