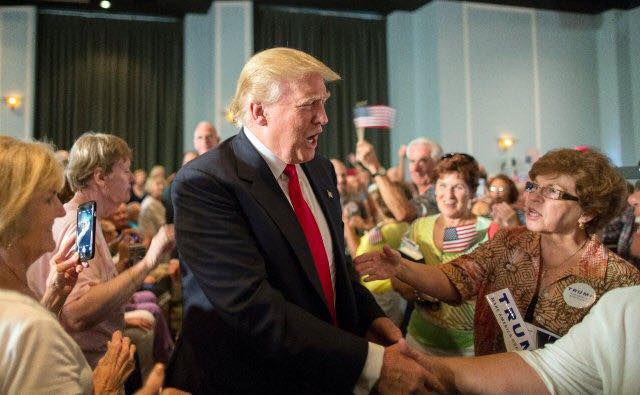 Billionaire businessman Donald Trump remains the overwhelming “First in the South” favorite, according to a new poll released by Opinion Savvy.

According to the survey, Trump is currently drawing the support of 36 percent of South Carolina’s GOP electorate – easily leading U.S. Senator Ted Cruz of Texas, who was supported by 19 percent of “Republican” voters.   Coming in third at 15 percent was U.S. Senator Marco Rubio of Florida – while former Florida governor Jeb Bush came in fourth with 11 percent.

“Trump carries every age group except for the youngest (18-29) where Rubio nudges Trump out by 7 points,” pollster Matt Towery, Jr. said in analyzing the results.  “But Trump has comfortable leads among the other age groups in the poll. Trump has the highest support from almost every segment of respondents grouped by political philosophy.”

Does age matter in a South Carolina primary?

Opinon Savvy interviewed 779 likely primary voters by landline and mobile phone between February 10-11, 2016.  The survey’s margin of error is plus or minus 3.5 percentage points.

As Mencken said, no one ever went broke underestimating the intelligence of the American public.

Nice of the women in that picture to give up the day’s episode of Judge Judy to attend the rally.

65% evangel and Trump led the poll?

it did say evangel or born-again. Would most Protestants or Catholics answer yes to born-again?

Evangelicals would answer yes. Catholics generally say no to shut up the Baptists proselytizing them – if they understand the real question, they answer yes.

Real Catholics don’t answer. We’re too busy checking out hotties in the other pews.

oh you are going to burn for that, 50 hail Marys and walk the stations of the cross 10 times or things are going to get quite hot for you.

When nuns are admitted to Heaven they go through a special gate and are expected to make one last confession before they become angels. Several nuns are lined up at this gate waiting to be absolved of their last sins before they are made holy. “And so,” says St. Peter, “have you ever had any contact with a penis?” “Well,” says the first nun in line, “I did once just touch the tip of one with the tip of my finger.” “OK,” says St. Peter, “dip your finger in the holy water and pass on into heaven.” The next nun admits, “Well, yes, I did once get carried away and I, you know, sort of massaged one a bit.” “OK,” says St. Peter, “rinse your hand in the holy water and pass on into heaven.” Suddenly there is some jostling in the line and one of the nuns is trying to cut in front. “Well now, what’s going on here?” says St. Peter. “Well, your excellency,” says the nun who is trying to improve her position in line, “If I’m going to have to gargle that stuff, I want to do it before Sister Mary Thomas sticks her ass in it.”

Oh…my…gawd. Cheerios on the keyboard once again.

Or you’re too busy getting diddled by your priest.

It was Sunday morning in a men’s class in a famous local church school.
“Will you please tell me,” said a member to the teacher, “how far in actual miles Dan
is from Beersheba? All my life I have heard the familiar phrase ‘from Dan to Beersheba,’ but I have never known the distance.”

Before the answer could be given, another member arose in the back of the room, and inquired: “Do I
understand that Dan and Beersheba are the names of places?”

“That is one on me. I always thought they were
husband and wife, like Sodom and Gomorrah.”

Jesus told The Donald it was the Christian thing to do to use eminent domain to take the widow’s house.

No. But in every past election a certain wing of the GOP has voted as if they were.

I dunno…ol’ Newt won back in ’12, no? He’s no preacher or hero to Bible thumpers…

I’ve started a fund to move Hinckley to Manhattan…

if you want to contribute, I take paypal.

did you mean to refer to the CSS Hunley..??

yee gads, do you thing any of them are posting here anonymously ?

Not wanting to rain on the Trump parade with an off-topic post, but this article is interesting if not downright scary.

We seemed determined, along with NATO, to antagonize Russia so we can start WWIII. I never thought I would see the day when we were the bad guys and Russia was not. How things change, and not for the better.

I wish Trump were in office, yesterday.

Be careful what you wish for.

I was told recently by a political friend to quit asking Dims. “How stupid can you get ?” They are taking it as a challenge. LOL

I try, Tom. The way I see it; Cruz, Bush, Rubio, etc, are more NWO lackeys, same as the Bushes, Clintons, and Obama. As such, they are wholly unacceptable as candidates for POTUS. A lot of people have made arguments that Trump might be a fraud or another NWO wolf-in-sheep’s-clothing. I cannot say for sure, but I hope he is not. His early rhetoric is his and sounds original, sincere, and from the heart. Parroted lines from parts of Trumps rhetoric coming from his opponents sounds, chesp, false, and insincere.

It is possible that Trump might get elected and screw us worse than the Clintons, Bushes, or Obama, ever thought about or could hope to. As I see it, that is a chance we have to take and if he screws us, we were going to get it anyhow.

I see our current situation as being similar to that of the protagonist in a spy novel I once read. He has a female operative in a small car he was driving and they were being pursued by bad guys in a large 6-wheel or larger truck, down a mountain in the outside lane. They soon came upon a slowpoke, in the same lane as they were in, traveling in the same direction, who impeded their escape. Our hero floored it and passed the slowpoke on a blind curve just before a line of traffic traveling in the opposite direction appeared in the lane traveling up the mountain on the inside lane. This bought them precious time and escape from the bad guys in the truck. The female operative asked how he knew that the opposite lane was clear to pass. He replied that he didn’t know. She became shrill for a moment, berating him for taking a chance like that with their lives. His reply was that they were certainly going to die when the truck caught up to them and forced them off the mountain. He noted that there was a 50/50 chance that they wouldn’t meet a car if he passed on a blind curve, do he went with that option and it worked.

I see our current situation and choices as being not too dissimilar from the male spy’s in that scenario.

A man who travels a lot was concerned about the possibility of a bomb on board his plane. He determined the probability of this, found it to be low but not low
enough for him, so now he always travels with a bomb in his suitcase. He reasons that the probability of two bombs being on board would be infinitesimal.

LOL!
People in SC are so dumb.
Keep it up!

We have no business being even remotely involved. Remember Obama and MANY, not all, Democrats haven’t been anti war. They are okay with war, just war where they want it.

You can see where Trump’s orange makeup ends. What a weirdo. He’s more of an elderly lady than a man.

Rather see Trump’s orange face than that UGLY face of Cruz……that nose looks like his broom ran into a brick wall…….bahahahaha!

They can both fuck off.

Yikes, you have a potty mouth! No need for the foul language …..

that is the collar of his white shirt …..

BJU would be the most extreme of the religious zealots. I would expect them to be Carson and Cruz supporters. That crowd would not be representative of the GOP generally.

They do seem to be more pro-Cruz, but Bush and Rubio were very warmly received.

Frank Zappa; may he Rest In Peace! One of the greats.

Donald and Univision settled their lawsuit yesterday. So today:

If @TedCruz doesn’t clean up his act, stop cheating, & doing negative ads, I have standing to sue him for not being a natural born citizen.

The numbers are about what was projected , I guess.
I don’t think I have ever seen Trump above 40 per cent in any poll taken up to this point.
I wonder how many will be left standing after the SC vote. If the three top vote-producing are still in it, that would leave around 30 percent to be allocated to Trump, Rubio, and Cruz. Who does the race favor after SC?

We ultimately will get either a huge Trump landslide from the primaries or the possibilty of an unwanted surprise with a brokered GOP Convention in July. Voting for anybody but Trump is a vote for the latter, which is undoubtedly what Lindsey, Gowdy and Scott would prefer.

Is it too late for NIMRATA to do a “take back”?

YES! And no washing the egg off her face. That is egg, right?

If recent patterns hold, Trump will win it. Look at the last two SC primaries – McCain divorced once, Newt divorced twice and now Trump divorced twice. All 3 had affairs.

Carson never had a chance in SC. I assure you SC Republicans will never support a black man for President.

Clinton is a fucked up sack of felony shit. The damn bitch knew she was violating the espionage act. And the skanks husband is a confirmed sexual predator who pals around with pedophiles. Only sick sacks of crap would support that demon.

Trump is pro-abortion, pro-universal healthcare and a good buddy of both Clintons, who likes using eminent domain to kick elderly women out of their homes so he can build a parking lot for limousines. He also openly talks about how he wants to bang his daughter. What a guy!

When the seven little turds drop out one by one, all we will be left with is a wet ass.

So happy to see Trump speak truth about Bush lying us into war in Iraq, which has become Endless War. Jeb can’t stand the truth. Hopefully, after South Carolina, Bushes will be relegated to the Trash Can of History.