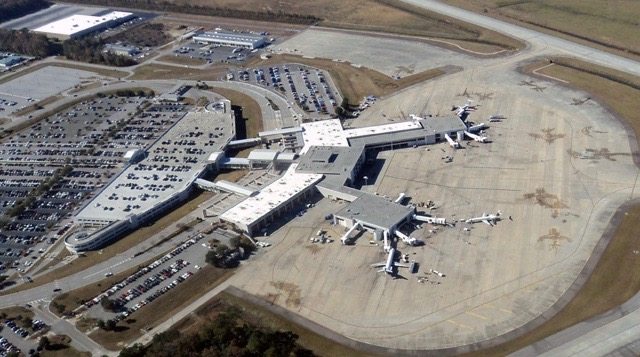 S.C. SENATOR PAUL CAMPBELL AT THE HEART OF THE SCANDAL …

Three lawsuits involving the Charleston International Airport are raising fresh questions about the management of this facility under its current leader – sitting S.C. Senator Paul Campbell, a liberal Lowcountry “Republican.”

This website opposed Campbell’s appointment to this $225,000-a-year post – and we have since written regarding some naked conflicts of interest involving his legislative advocacy on behalf of the government-subsidized entity that pays his lofty salary.

Now, a trio of lawsuits is drawing additional scrutiny on the airport – and its ethically challenged leader.

Filed in Charleston County court, these three suits – filed on behalf of four different plaintiffs – allege a host of abuses.  According to a source familiar with the cases, they “give a peek into the dysfunction (Campbell) has created … while collecting $225,000 and benefits to work part-time while serving in the (S.C.) Senate.”

All three suits name the Charleston County Airport District as the defendant.  To view them for yourself, click on the following .pdf files (here, here and here).

In one suit – alleging defamation and failure to pay wages owed – Campbell is accused of screaming at a former airport employee and falsely accusing her of mishandling an employee issue.  One of his subordinates is also accused of screaming at the employee, Rebekah Beamon, for allegedly “taking sides” in an argument with involving former S.C. first lady Jenny Sanford.

The suit also accuses the airport’s attorney of lying to members of the media about Beamon – who was reportedly to be fired so that airport officials could divvy up her salary.

A second lawsuit – filed by Robert Bryant, a retired U.S. Navy engineer – also alleges defamation on the part of airport personnel, including Campbell.

Bryant filed for divorce from his wife – an airport employee – on the grounds of adultery last summer.  He gave a deposition last October involving “concerns he had about what was occurring at the Airport.”

This deposition – purportedly quite seismic – began to generate quite a bit of discussion among airport personnel, which prompted a mandatory meeting of these staffers called by Campbell.  At this meeting, Campbell is alleged to have threatened them – telling them not to discuss the Bryant deposition.

Campbell is also alleged to have told the employees the Bryant deposition was “patently false” – which is what prompted the latter’s lawsuit.

A third case – filed by airport employees Karina Labossiere and Darla Seidel – is perhaps the most serious of the three cases.  It delves into the financial operation of the airport – and is full of allegations of questionable personnel payments, violations of procurement policy and other abuses.

Specifically, the suit alleges that in May 2015, “Senator Campbell, or someone using his (airport) Visa card … booked three (3) airline tickets to Hawaii” at a cost of nearly $1,800 apiece.

This trip was later cancelled when it was brought to the attention of the airport’s board of directors.

Both Labossiere and Seidel allege that they have been subjected to mistreatment by airport officials for simply doing their jobs – including being reprimanded for calling out these questionable expenses.

Taken together, the three suits reveal a bureaucracy in turmoil.

Making matters even worse for Campbell?  Sources familiar with the cases tell us Campbell’s S.C. Senate campaign organization has received campaign contributions from entities linked to the various inter-office drama.

Obviously, that would escalate this situation significantly.

Stay tuned for much more on this story as we dig deeper into the lawsuits and attempt to glean additional information from our network of sources.