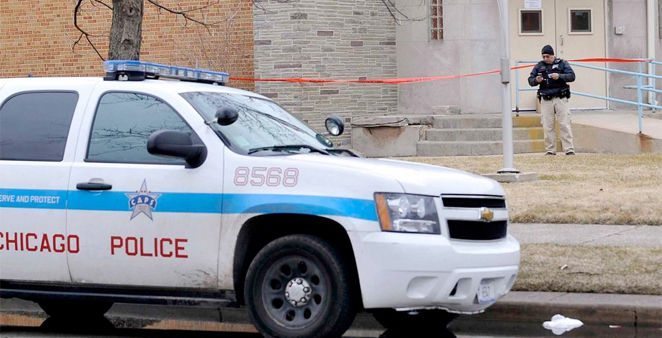 Three years ago – almost to the day – we wrote about a rash of gun violence in Chicago, Illinois.

Fast-forward to this week …

Its proposed remedy?  Ramp up government’s “War on Guns” of course!

“It is clear we need stronger state and federal gun laws,” a Chicago police department spokesman told the paper.

“Because those who illegally procure guns will follow gun purchasing laws, and the only thing preventing them from doing so is not enough laws?” the website Zero Hedge mocked.  “One can almost see why Chicago’s gun problem is getting worse by the day.”

Again, if we’ve said it once, we’ve said it a million times: More guns = less crime.  The government’s own stats prove it.  But even if they didn’t, there’s still the matter of the U.S. Constitution – which expressly forbids government infringement on the right to bear arms.

That’s why we support civil disobedience of any gun law (federal, state or local) that so infringes …

But hey … if you’re feeling lucky, go to Chicago without a gun and rely on all those gun control laws to keep you safe.

Thinning of the herd

i don’t think the more guns equals less crime is going to solve Chicago’s murder epidemic. there are over 600 gangs in that city and it is a lot of kids killing kids. they get on social media and trash talk which leads to a shooting instead of a fistfight. no idea how they are ever going to solve that problem. seems I recall the source of this gang problem intensified when they tore down some long established projects and relocated the tennants – which created new, smaller gang territories and rivalities.

Thanks to Al Gore for creating the internet so that these nitwits can use social media to stalk each other.

If Chicago had just had a good community organizer Chicago wouldn’t be having this problem.

The cause of gun deaths are somewhat similar to car traffic deaths.
It is not the object that is employed, it is the behavior, stupid.
The fight to ban guns on the left is not so much about saving lives, it is about controlling and changing people’s mindset. The left hates independent and free individuals. You can’t believe their crap unless you totally join and buy in to the club. No free thinking allowed.

Then how come every time I declare myself a proud independent on this site so many right wingers claim I’m sort of fence sitter since I don’t see things totally their way and if I’m not part of the solution I’m part of the problem???
If there’s ever been a better example of the pot calling the kettle black as far as free thinking goes I can’t find one!!!
I don’t get near as much shit from liberals on this site as I do right-wingers….(what few liberals there are on this site……)

Spark if you see few lefties on this site than that might be a clue as to where you are standing. Granted, it could be two nut jobs posting under many user names like our far right wing. You know your independent/middle when your cacthing crap from both sides.

I don’t know how you extracted that personal message to you from my comment. It is OK to disagree on issues.
Don’t take it personally. Believe me, you were the last thing in my mind when I made that post, so was everyone else that post here.
I don’t run through a mental check list of all the people that post here every time I make a comment.
And I don’t ever remember blasting you for anything you have posted. Might disagree with your conclusions, but this is an open forum.

I can tell you no amount of guns would make me feel safe in Chicago. Sometimes the best self defense is staying the hell away.

If you want to keep up with the stats in Chicago on the shootings and murders there is a web site called: heyjackass.com. To date it is now 23 shot & killed with 122 shot & wounded. Sweet home Chicago.