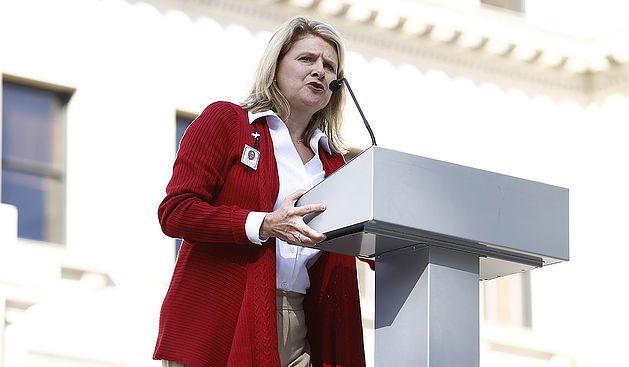 S.C. Rep. Jenny Horne is receiving criticism from a group of political insiders for a fundraising solicitation sent in violation of its guidelines.  Earlier this month, Horne sent an email to members of the Liberty Fellowship of South Carolina – a group which describes itself as “an incubator for exemplary leadership in South Carolina.”

Her message encouraged the group’s members to financially support her candidacy against “Republican” U.S. Rep. Mark Sanford (news of which broke exclusively on this website).

Here’s the text of her message …

In case you missed the announcement, I wanted you to know that I have decided to run for Congress in the Republican Primary in the First Congressional District against Mark Sanford. I would love it if each of you would check out my campaign website at www.jennyhorne.com.

In a federal election, I can accept donations only from individuals or their LLCs. Personal checks can be made payable to Jenny Horne for Congress and mailed to the PO Box listed below. Again, thank you for your continued friendship and support!

Together we will win the Republican primary in the First Congressional District and beat Mark Sanford!

Happy Holidays to you and yours,

P.S. The law allows individual donations up to $2,700. I hope you will show your generous support by sending a contribution to help us have a strong start to 2016.

Horne’s message apparently rubbed a few of the “Fellows” the wrong way, and three hours later the group’s executive director – Luanne Runge – sent out a message of her own.

“Our golden rule is that we do not raise gold in the Liberty Fellowship family – that is, we do not solicit money or votes through the Fellowship,” Runge wrote.  “If there are Fellows with whom you have a relationship outside of the Fellowship, then you can solicit them individually.  Wholesale solicitations to the entire Fellowship or a subset (for example, your class), are not within the lines.”

Horne, of course, is the state lawmaker whose impassioned, tearful plea during the Confederate flag debate was credited by the national media with turning the legislative tide toward removing the controversial banner from the grounds of the S.C. State House.  But Horne’s speech wasn’t without controversy – most notably her yet-to-be-validated claim that she was a “direct descendent” of former Confederate States of America (CSA) president Jefferson Davis.