Who is Allen Olson?

He’s a “tea partier.” Or at least he was prior to jumping on board the 2012 campaign of establishment “Republican” Newt Gingrich.

After that, we started referring to him as what he is … the latest in a long line of establishment “Republicans.”  Of course that’s what makes his recent endorsement of Donald Trump a little bit surprising. 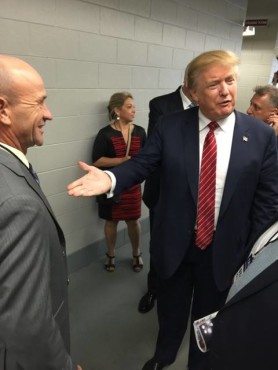 Olson apparently didn’t get the memo, though.  The former Columbia Tea Party leader threw his support behind “The Donald” during the latter’s appearance in Anderson, S.C. earlier this week, citing Trump’s tax plan as the reason for his endorsement.

Olson’s endorsement obviously isn’t a game-changer (although we’ve received a few calls from national outlets asking about its significance).  What does it signify?  That Trump’s appeal in the Palmetto State is extending into GOP establishment turf.